My First Vote – The Feminist Wire

It’s a strange time to be a young woman in America and to be facing voting for the very first time. When women are still making only 77 cents to every man’s dollar and when states like Arizona have recently passed legislation that requires all schools to leave abortion out of any lessons about unwanted pregnancy, it’s hard to look at our everyday struggles and not conclude that we are still living in a man’s world. 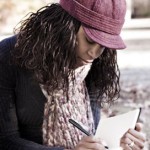 As a first-year female college student pursuing a creative writing degree, I can’t help but look at my future with a great deal of doubt and anxiety. Every year of college translates to several years that will be spent paying off student debt when I graduate. Who knows what kinds of odd jobs I will have to take when I enter the workforce? How will I ever afford to support myself? Adding to that is the renewed war waged on women’s bodies and the decisions they make about them.

As I prepare to vote in my first election, I’m particularly interested in each candidate’s positions on marriage equality, reproductive rights, access to education, and efforts to keep women and children safe. I took this decision seriously, so I watched the debates, hoping to hear the facts and making an informed decision on what I heard. Honestly, I was disappointed by both of the candidates’ behaviors. I’m frustrated because instead of celebrating the candidate who tells the truth, we’ve been forced to settle for the one who lies the least. At the root of society’s ills lays systematic racism, classism, sexism, and heterosexism, and as I watch each of our candidates offering up their opponent’s faults and their own solutions to social problems, I can’t help but think that these are Band-Aids for deeper wounds. My peers and I aren’t interested in political stratagem and white lies; we’re ready to talk about the real issues here and to be included in the solving of these problems that are obvious but ignored in the majority of political discourse available to us. 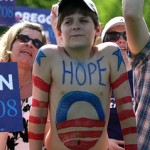 For some reason, my generation has a reputation of apathy and stupidity, and I just haven’t found this to be true. Maybe you don’t hear from us in the larger political conversation because there isn’t a place for our voices to be heard. As the “youth vote,” we are both feared and targeted while still being treated like children that just leveled up and can’t be trusted. As new voters, what are young women supposed to make of the binders of tokenism Romney was so proud of in the second debate as we prepare to enter professional worlds? When we hear the ridiculous insinuation that single mothers are the real cause behind the growing gun violence in this country, what are we to make of the celebration of “the great American family”? Our president is all about defending the American people, but how many people are alienated and left unprotected under his policies? When he proclaimed his support of same-sex marriage, it was celebrated, understandably, but it took years of “evolving” on the matter and an unplanned comment by Joe Biden to get him there.

No matter who wins this election, people are going to continue to be oppressed – around the world, in your cities and hometowns, and probably even you. But if we give up completely on the system we live within, how will anything change? Is full-scale revolution the only answer? When I place my vote, I will do so in the service of a future where women are paid and treated equally for their contributions to our society, where schools are places of learning and growth that go beyond state-wide standardized tests, and where love, no matter what it looks like, is celebrated instead of shamed. I hope that this November every single one of my friends will vote, because the awesome power we have when we collaborate with vision and determination is stronger than we were ever taught to realize. If future elections want to speak to us, maybe they’ll talk about how my generation learned to underestimate ourselves—now that’s an issue, we care about.