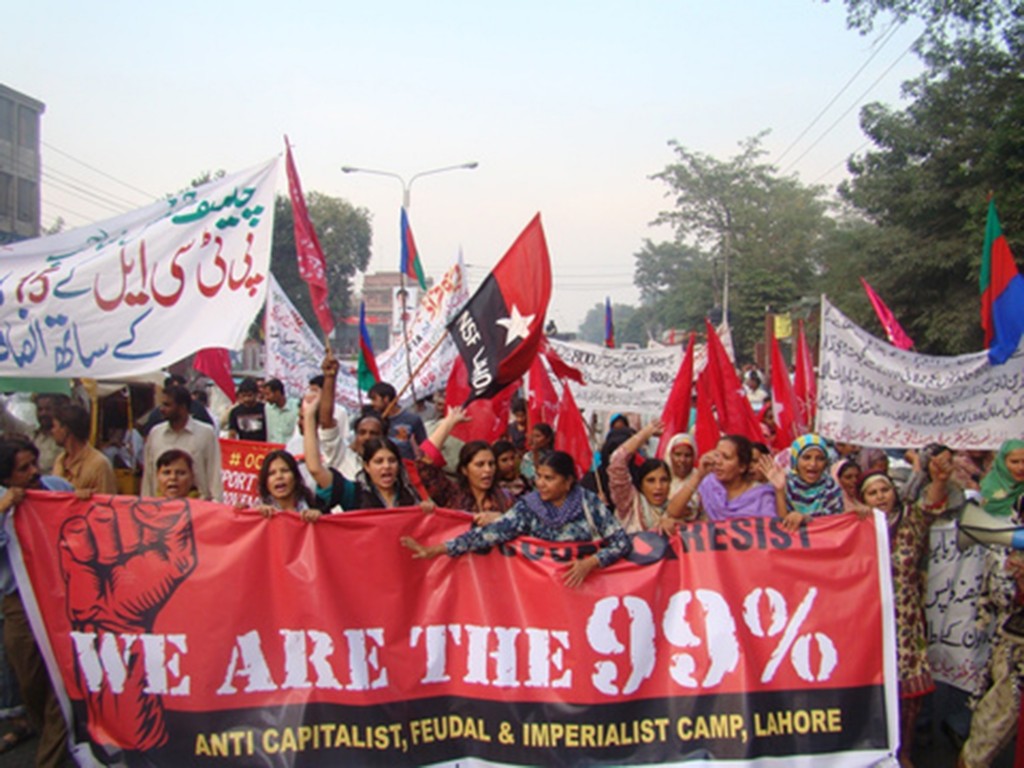 Women Joining the Occupy Movement in Lahore, Pakistan in October, 2011

As the upcoming U.S. presidential election dominates the headlines, the uncomfortably familiar rhetoric prioritizing religion’s role in American politics continues. One can recall, for example, when John McCain defended President Obama against accusations that the President is an Arab (read: Muslim) by stating, “No, he is a good man.” The audience booed him. But the question then, as it should be now, was: what is so wrong with being Muslim?

One of the things causing me the most anxiety today is the American public’s willingness to believe, consume, and reproduce age-old Islamic stereotypes.  Islam has become a piece of the American puzzle that doesn’t quite fit and therefore needs to be corrected or molded. Anthropologist Saba Mahmood argued in her 2002 article, “Feminism, the Taliban and the Politics of Counterinsurgency,” that  mainstream feminists in the U.S. used the burqa to create the “victimized Afghan woman” in order to gain American support for the war without truly understanding what it meant for Afghan women to live under the Taliban. More recently, Mona Eltahawy’s article, “Why Do They Hate Us?” in Foreign Policy (May/June 2012) was hailed by a number of American feminists for confirming their suspicions: Islam is inherently misogynist. Who better than an Egyptian-born Muslim woman to support their position?

The “victimized Muslim woman” is a stereotype that continues to hold true today. Muslim women are being used to further misunderstanding and hatred toward Islam as a whole. The passing of anti-Sharia legislation in many states has proven that many Americans are uninformed and scared of Islam.  Islamophobia in the U.S. ranges from liberal opinion, suggesting Islam needs to modernize, to conservative opinion, suggesting that Muslims need to ‘go back home’—because Islam is somehow fundamentally incompatible with America.  For example, a Facebook group entitled, “Women of the World United Against Islamic/Muslim Sharia Law,” states that Sharia allows “the continued oppression abuse and torture of women and children,” often using perverse language and graphic pictures to prove its point. Some of its members suggest in their comments that Muslims need to be “wiped off the face of the planet.”

Feminists more often than not fit into the first category:  Islam needs to modernize.  This begs the question: where do Muslim feminists living in Islamic countries fit into this constructed idea of Islam and Muslim women?  Feminists in Pakistan are grappling with this very same question. Today’s Pakistan is a nation undefined, racked with educational, environmental, socio-economic, and political problems. Pakistan was created in 1947 with the flick of a pen when the British quit India.  And although Pakistan’s founder, Muhammad Ali Jinnah, did not intend to create an Islamic nation per se, Islam has always played a part in the nation’s politics. The need for a Muslim nation was ostensibly one of the reasons for its creation.[i] After Jinnah’s death in 1948, Pakistan was ruled mainly by a series of military dictatorships, and Islam was used to justify the existence of the nation.  Defending the faith became paramount to gaining public support for Pakistan’s numerous wars against India.

In 1978, General Zia-ul-Haq, Pakistan’s longest-standing and most brutal dictator (1977-1988), instituted an Islamization program that changed the status of women in Pakistani society forever. Zia’s Islamization was not based on a pre-given meaning of Islam, but rather on cultural practices specific to the subcontinent. It’s a stretch to say that the Qur’an supports Zia’s conception of an Islamic nation. Rather, certain conservative men used their interpretations of the Qur’an to support Zia’s contention that women belong in the private sphere (e.g. the domestic sphere) and should be veiled in public. His regime was bolstered by funds he received from the U.S. to fight a proxy war against the Soviets in Afghanistan.[ii]

Zia intentionally targeted women because he knew focusing on the re-invigoration of the Pakistani family would be outwardly supported by religious parties and would win him the subdued approval of all classes of society. His Islamization plans, which ultimately sought to moralize the public sphere, focused in part on juridical measures and in part on propaganda. It was only with the unexpected legislation shift that Pakistani women realized how tenuous their hold on their own rights actually was.

The early 1980s saw a number of self-proclaimed feminists, including writers, academics, performers, and politicians, come into the activist sphere as a reaction to Islamization. Protests against the state were articulated through newspaper articles, campaigns in schools and universities, art, poetry, and song. While a number of these women were the daughters and granddaughters of the women who participated in the Pakistan movement and pushed for women’s rights on the eve of nationhood in 1947, their activism was notably different from the activism of the 1930s and 40s. The younger generation had a decisively more feminist outlook and approach.

The Women’s Action Forum (WAF), a group created in 1981, was the largest women’s organization of its time dedicated to protesting Zia’s Islamization. The WAF’s ‘umbrella’ sheltered a number of women, some of whom self-identified as feminists and others who did not, who came together to combat “men, money, mullahs, and the military.”[iii]  The internal struggles to define the character of the organization led to a debate on the issue of religion as a site of contention or as a strategy of empowerment. Throughout the early 1980s, the WAF used “progressive interpretations of Islam” to counter the patriarchal state’s version of religion and morality, and in doing so, succeeded in gaining the unlikely support of right wing Islamic women’s organizations.[iv] The WAF and its affiliates conducted mass demonstrations against a number of laws and issues throughout the early 1980s.

The 1990s saw a feminist movement that struggled to define its contours, a debate that continues today. The main debate between feminists is whether to define feminism through a secular or an Islamic lens. ‘Modernist Islamic feminists’ is the common term given to feminists who seek to reinterpret Islamic law by viewing the Qur’an and Hadith in a historical context. This methodology produces an understanding of Islam that grants women greater freedom and rights than those afforded to women by their male counterparts. This approach rests upon the argument that until the present, Islamic tradition and Muslim culture were overwhelmingly patriarchal and thus inhibited the growth of Islamic scholarship among women.

Secular feminists, on the other hand, define their struggle for rights outside of an Islamic framework. Secular feminism has largely been criticized within Pakistan for its Western outlook and has been marginalized by a number of moderate and right-wing Islamic women’s movements precisely because of this. Many Pakistanis falsely define Western as secular and therefore ‘anti-religious.’  Yet another crucial part of this ‘feminism as Western’ charge rests on the assumption that feminism is anti-male, thereby destructive to the family and ruinous to society and the nation.

Many secular feminists maintain their Muslim religious identities in their daily lives while advocating for a secular Pakistani state. They are not anti-religious or against Islam, but rather deviate from Islamic feminists on the method through which to negotiate women’s rights with the state and on the issues that unite Pakistani women. Class is undoubtedly the biggest opposition to women’s organizing in a country where wealth gaps are huge and often insurmountable. Secular feminists argue that Islam cannot unite women across class, ethnic, and linguistic lines because Islam does not get to the heart of day-to-day subjugation.

In reality, the situation is much more complex. Secular feminists reject the notion of an Islamic Pakistan by questioning the role of religion in the relationship between the state and its citizens.[v] This line of argument calls for the state to override non-national claims of authority, such as familial, tribal, or religious claims. Additionally, wielding Islam as a method for achieving rights for Pakistani women does not address religious diversity in Pakistan, a country where non-Sunni minorities, including Shi’as, Ahmadis, Hindus, Christians, and Sikhs, are discriminated against not only by their fellow citizens, but also by the Pakistani government.

While the space for women in nationalist politics was always small, the space for feminist politics in Pakistan is almost non-existent, and feminists, both the secular and Islamic flavors, have to be content with voicing their opinions through non-governmental organizations and in academia, both in Pakistan and abroad.

Neelam Hussain, English literature professor in Lahore, notes that for Pakistani feminists, “there is a constant accusation of being Westernized. We partake of both worlds as we are the products of both worlds… For women who straddle these two worlds there is an enrichment and a very strong and vital participation.”[vi]  Margaret Atwood once questioned if the feminist label can be applied to those who do not consciously work within the framework of the feminist movement. Atwood rejected the feminist label, although her novels featured female protagonists fighting patriarchal oppression. The answer to her question, however, is complex. Feminist self-definitions in Pakistan exist within a range of identities on a continuum between the religious and the secular, and Eastern and Western. Many feminists are proud of their hybrid identity and for them, being a feminist does not make them any less Pakistani or Muslim.

Ultimately, it is a misnomer to call feminists using Islam as their framework ‘Muslim feminists.’ Their counterparts, who choose to wield a secular methodology, have the agency to self-identify as Muslim and often do.  Feminist identities in Pakistan are therefore defined largely by methodology, which is only one facet of Muslim feminism in Pakistan. While their challenges differ, Muslim feminists are still trying to achieve the same goals as their feminist sisters in the West: political, cultural and economic equality for woman and a place in the constant struggle to define their nation. Western feminists who victimize Muslim women are just as bad as the patriarchal men they’ve been fighting against decades. It is not Islam per se that is the problem, but rather convoluted discourses surrounding Islam that are the sources of contention and confusion.

[iv] Ibid., 32. Zia notes that right-wing Islamic women’s organizations sided with the WAF in protest against the state regarding rape, but did not agree with the WAF’s stance on Islamization. 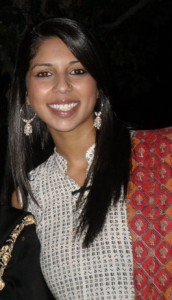 Madihah Akhter recently completed her Master’s degree in modern South Asian history from Tufts University. Her research foci include Islam in colonial India, gender, transnational women’s movements, and feminist identities on the Indian subcontinent. She is currently working as a free-lance writer and editor for academic textbooks.

Related ItemsPoliticsreligionWorld
← Previous Story Bad Blood?: The Visibility and Invisibility of Violence in the Antagonism Between Native Americans and African Americans
Next Story → Secret Survivor: An Interview with Amita Swadhin