B—- gasps into a waking death as the sun plagues the room with good-morning shade. Wordlessly, black flesh creaks upward, bending at its fulcrum, back arched backward, the silence of the unspoken pulling it up in a spectral embrace illuminated and shaded into a grotesque number two. A double possession captured in a long stretch, the crack-crack-crackcrack crack staccato of a spine reclined in the hypnotic space betwixt and between life and death and here and dream—the nexus of resignation and the subtle syncopation of arrhythmic breaths. A small creak, “two” to “L.” Slowly, the letter’s root shortens, seeming to shrink to the left, toward the trunk, the trunk growing wider if only slightly, until the root vanishes, and only “one” remains; the “one” grows branches and the branches sprout smaller, wiggling appendages, and the light pulls the body toward it, stretching it at an angle that first lengthens, then shortens it. Frozen in phototropic distension in a breathing photo, a still life, arched in paradox, a distorted sublime as distended black flesh. Erect again, in a vertical block screaming, “one,” or “I,” or as superlative itself, “!,” B—-pivots to profile in a corporeal utterance unspoken into the room, jettisoned into walls and corners, weaving a skeleton of the violently silent space through which black soles shuffle. Purposefully. Coerced by light. The shadow side of sunshine whispered in every shift-step, each of which was nothing more than the articulation of an electric demand from unseen conductors of an inverted enlightenment behind sparkling black eyes, searching, darting funhouse mirrors giving the impression of reflection, masking the actuality of translation.

“Eggs, pancakes—blueberry—bacon,” B—- thinks, of a secondary hunger, with a different driver. Bends into the blackest shadow of a crouch in a corner outside the doorframe, stealing away from the hot sight of the sunny overseer—B—- begins to work. The words scribbled on the foundation of a bloody dreamscape echo among the conductors, trillions of them, vibrating, re-inscribing the lines in the complex movements of lightly wrinkled fingers and written palms over gadgets, pieces, fragments—morphemically mechanical parts to the syntax of a whole device sanctioned by a grammar hidden from, but determined by its antagonism to, the light—all shadows become clearest with sunshine.

In the interstices between the movements toward a complete translation project, the dream played again and again each time, overlapped laterally and vertically like so many screens speaking the projections of an inner, or like staircases viewed from above with flipbooks for steps, cascading in reverse, colorful, noisy dominoes standing back up. The play unfolding in a cold open on B—-‘s trembling hands, sparkling with the glitter of frigid sweat, black beads bejeweling open palms. Vibrating inconsistently like flattened hummingbirds, they lightly blur space, sending infinitesimal silhouetted ripples through an ocean of bold reds and pinks, and a vast, clear blue. A fertile breeze blows, impregnating black gooseflesh with the somatic child of anticipation and confusion. And the halted, metallic scrape of a strange sphere rocking and forth in the wind with a dull, rhythmic thud against a right, black, leather boot’s toe plays the riff of a lazy drummer shick-tapping through deep thought. Twin lenses slowly pan upward blurring everything together, black hands spilling ink over the wet cityscape; everything swirled together for but a moment, the chaos preceding clarity.

A clarion chaos—a tinnitus rising and rising—someone’s hand turning the volume knob of an amplifier screaming feedback coiled Mobius—the clarity of the street climbing parallel to pain on cognitive cliffs—a quivering synesthesia rippling with the deafening vividness of spilled blood and rent flesh, with not a discernible face to be seen. The tinnitus muffles something, a rhythmic pounding crashing like a thunderclap, with no clouds adrift in the crisp blue void—just the implied presence of the sun, casting its gaze over everything. It is so hot. Lenses dart and linger, dart and linger, left, right, left, right, up, down—stop. Boots shuffle backward awkwardly on jello asphalt, and a black mamba lunges at the metallic orb with jaws open. On one knee, B—- chews the device with eyes and hand, coating it in the vexed salivation of squinted optics, and rolling it over every taste bud of a curious palm, damp. It is so hot.

“Light,” the word cutting a lip on its way out. A drop of crimson rain from a fleshy cloud falls on the mechanical food, and the snake spits it out, its prey crash-rolling away as if offended rather than relieved, fangs becoming fingers again, finging a painful canyon spanning the width of a thread, and the twin lenses dart to meet the red irises of fingertips in a shaky stare, and the whole world turns on its side—ninety degrees, and the x-axis startles B—-‘s head with a wetter-than-expected thump. Over the course of a moment: hand becomes lever helps lift body face head turns lenses find pinkish red pool full semi-liquid solids like gummy icebergs crimson lake; widening lenses, widening lenses, focusing lenses; hand splash flail splash row, row violent; lower vertebrae meet curbside face hands sticky drip human paint. A cut lip, and two metallic tastes. Terror floods lungs. It is so hot; it is so hard to breathe. Tears wash over lenses and two smashes hummingbirds quiver in a silent blur behind a ringing amalgam of bold reds and pinks, and a vast, clear blue; salty tears, washing over the canvas in an empty tabula rasa promise—more like a rosy stone at the foundation of every speakable utterance, broken off, the message fractured by a constitutive silence. Everything fades to pink, and the lazy drummer metallically shick-taps somewhere off in the distance, and the pounding thunder of a message pokes through the piercing tinnitus.

Afloat above the tablet of the cosmos in a distant corner of the universe before a swirl of light and color, twin lenses blink without eyelids. B—-‘s black flesh sails toward the event horizon, a soulless vessel, hollow but for its insides. It stops, half of it. Legs become noodles pulled sideways, the body angles into a toppled “L,” its root slowly beginning to curve and wither, splayed noodles carried by an invisible cosmic current—the gravity. The root breaks from the trunk in a jagged silent tear, a soundless and inconsequential rip that fails to register on the vessel’s face, twisted in a slight grin, Mona Lisa multiplied by a negative. Out of the break pours a white fluid, like the latex exuded after the snap of a green plant stem in grandma’s backyard; the gravitational whirlpool stretches the liquid out, wears it like a mask, a jabbawockee, expressionless in its drama. The trunk gets caught in the pull, and B—‘s a smaller “L” this time. Another rend, more liquid. Another “L.” Molecular “L.” Atomic “L.” No expression. Only the echo of the possibility of a smirk remains, like a constellation that could have been, but cannot be. Every piece bisected again and again in an infinite stream of “L”’s afloat toward the immeasurable crushing nothing of a singularity. Spaghettification to infinity and beyond, and it sounds like “LLLLLLLLLLLLLLLLL…” The lenses want to shed tears, but the ducts are caught adrift—the silent soul cry must suffice, a supernumerary pain tears cannot quantify to begin with. Blink, blink, and the black hole mouths the words to the thunderous message of before with swirly white lips dotted with the quantum crumbs of black flesh.

All the silver screen flipbook domino steps playing in reverse stop black, the backs of so many teeth, against the top row of which the mind’s tongue presses speaking a choral, “LLLLLLLL…” but saying something else.

The sphere whirred and hummed at B—-‘s feet, the summation of so many fragments, a sentence, a statement, sanctioned by the immutable grammar of a dream. A cup of black flesh cradles it, a treasure, and the precious teal glow bled into, stained, and overwhelmed the sunlight whipping into the bedroom. The black ball in the corner stretches upward into a singularity, “one,” “I,” and shuffles about the space, dressing itself, never letting go of the metallic orb, a sacred talisman inscribed and inscribing a message fleshy lips mouthed over and over again, black mantra of liberation in a whisper.

Hushed, “All honkies and some negroes will have to die / This is unfortunate but necessary.”

B—- slipped the device into jean pockets, patted it, eyes reflecting on the reflection in the mirror. Like two lenses floating in black-blue ether, two black holes speaking in the night. Downstairs, down the street between monsters and ghosts, strolled a cosmic entity mouthing the words over and over again; down the steps to the subway, barreling down the tracks, aluminum cans on a string pulled through a storm drain. Up to the streets on a summer day, the sunshine cracking its gaze across the back of the cityscape, a pair of black leather boots plods over a sidewalk, monsters and ghosts and zombies moving about. Black mamba emerges from the pocket, releases a metallic egg with a teal glow, and retreats; the dulled clop-clop rhythm of boots layered with the shick-tap of a lazy drummer, rolling between and colliding with passing feet, no destination in sight. It stops, the boots continue. It begins to spin, and bounce, dancing on asphalt, demanding to be hatched, to be birthed, to live in the death it promised. It stops in mid-air, hovers there; time stops, space halts. A pair of black boots performs an about face. Just out of range.

Monsters and ghosts and zombies askew in the performance of an utterance, elongating, stretching, bending, breaking, spiraling in a silent vertigo, staged. And it’s a silent production, but for visible “LLLLLLLL…” and the lips mouthing the mantra again. Silver screen flipbook domino steps replay behind sparkling black eyes. Three blinks, and it’s all gone. No bold pinks and reds and human paint. Just the vast, clear blue, the sunshine overseeing the instant gravity of the nothingness’ singularity, and the shick-tap of a lazy drummer rolling on asphalt remain. And it is so hot. 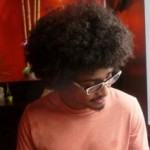