Voices Marginalized at the DNC: WorldCantWait.net – The Feminist Wire

Voices Marginalized at the DNC: WorldCantWait.net 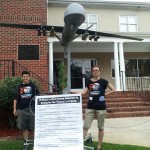 Outside Community Outreach Christian Ministries, the church where Jesse Jackson is speaking for the Progressive Democrats of America, just before the Democratic National Convention.

“The Democrats are an imperialist party,” says Lena Thorne (right) of worldcantwait.net. Thorne asks “Why should we be surprised” that a Democratic president is drawing up kill lists– even of US citizens like Anwar al-Awlaki and his child, both of whom were killed in drone strikes ordered by the current president.

Jill McLaughlin (left), also of worldcantwait.net, says people should pay more attention to the drone program. “There are even progressive people who know about this and are making apologies and excuses for Obama,” she says. “Just because Obama’s a Democrat doesn’t make it any less wrong. It’s immoral, it’s illegitimate what he’s doing.”

McLaughlin and Thorne do not plan to be at the DNC, but will attend the 12noon protests at nearby Marshal Park.

What do you think? Is the Democratic Party an imperialist party? Sound off!