The Limits of Reproductive Politics: Defining Women’s Issues at the DNC – The Feminist Wire

Home / Economy / The Limits of Reproductive Politics: Defining Women’s Issues at the DNC

The Limits of Reproductive Politics: Defining Women’s Issues at the DNC

By Heather Laine Talley on September 4, 2012

Early this morning, on the train from the Charlotte suburbs into the city center for the Democratic National Convention, I met a woman visiting the convention to network with other grassroots organizations who do health outreach to Latino communities. Later, leaving a press briefing, I spoke to an Obama for America media outreach staffer.

“Who are you with?” they each asked me.  “The Feminist Wire,” I responded.

And then a funny thing happened: Both, in these separate conversations, raised the issue of reproductive politics. 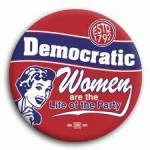 Tuesday morning featured the first of two Women’s Caucus meetings. Democratic Party insider Nancy Pelosi, political strategist Donna Brazile, Senior Advisor to Barack Obama Valerie Jarrett, and Secretary of Health and Human Service Kathleen Sebelius spoke of all that women had gained from an Obama presidency. Several mentioned the Lily Ledbetter Act. All referenced the Affordable Health Care Act. But if time spent talking about issues is any indicator of the relative significance of what the DNC believes to be of central interest to the Women’s Caucus constituents, then the primacy of reproductive rights supersedes all other issues combined. Even the Women’s Caucus line-up indicates a marked emphasis on reproductive health. Remarks by Democratic Party women were interspersed with addresses by Planned Parenthood CEO Cecile Richards, NARAL Pro-Choice America President Nancy Keenan, and Sandra Fluke, whose testimony before Congress in favor of health care coverage for prescription birth control had previously led to her branding by Rush Limbaugh as a “slut.” Fluke’s own story may offer some insight into why reproductive politics are currently made to stand in for women’s issues more broadly.

The outbreak of hostility in response to Fluke’s testimony, led by but not exclusively propagated by Limbaugh, demonstrates the virulence that currently awaits women who dare to speak of sexual agency and the need for contraception. This response, which in previous years would likely have been unimaginable, has been given a kind of respectability as multiple GOP candidates, including Rick Santorum and Paul Ryan, have stated their mindboggling opposition to birth control. In recent weeks, “legitimate rape” has entered the vernacular. The very qualifier “legitimate” indicates that many (men) remain suspect of the prevalence of sexual violence in women’s lives. And over the last year, state after state has debated and enacted more restrictive laws around abortion, slowly fleecing the legislative integrity of Roe v. Wade. It makes sense that in such a political climate, there would be an urgency surrounding issues of reproductive justice. And the question worth asking is what are the costs of imagining abortion rights and contraception access as “women’s issues” writ large?

Importantly, reducing women’s issues to reproductive politics allows the GOP to set the terms of the debate, and it is a debate that continually links women with our reproductive capacity and sexuality. Surely, there is more to say about women’s lives than can be reduced to the uterus. Consider the Democratic Political Platform through a feminist lens. The continued expansion of the military, the support for the right to own and carry guns, energy policy, and small business tax law are all issues that have unique consequences on women’s lives, as long as women continue to disproportionately bear the burdens of family caretaking in war time, interpersonal violence, the bodily effects of pollution and toxic contamination, and economic insecurity. Of course, the politics at play in the LGBT Caucus, the African American Caucus, the Youth Council, the Disability Caucus, the AAPI Caucus, the Veterans & Military Families Council, the Rural and the Senior Councils, and the Hispanic Caucus matter to women too. In actuality, every issue is a women’s issue.

Even as reproductive politics are extraordinarily critical in the lives of women, there is a critical need to embody a more expansive notion of women’s issues if the DNC hopes to engage women’s lives in all their diversity. In her opening address to the Women’s Caucus, Nancy Pelosi articulated a broad and more complicated notion of women’s issues. For example, women’s financial security depends on accessible health care. Public funding of elections is likely the only route to assure parity for women in elected office. And overturning Citizens United is fundamental to undermining a society built by wealth, which never serves women’s collective interests. Pelosi’s comments speak to how the infrastructure of American society and the working of American politics must fundamentally shift if the goal is to make women’s lives better, which is ostensibly the goal of the DNC Women’s Caucus.

“Women are truth tellers,” Kathleen Sebelius noted. The truth is there is some real re-thinking about what should be counted as a “women’s issue.”