By Catherine Morrisey on September 4, 2012@CaMo0 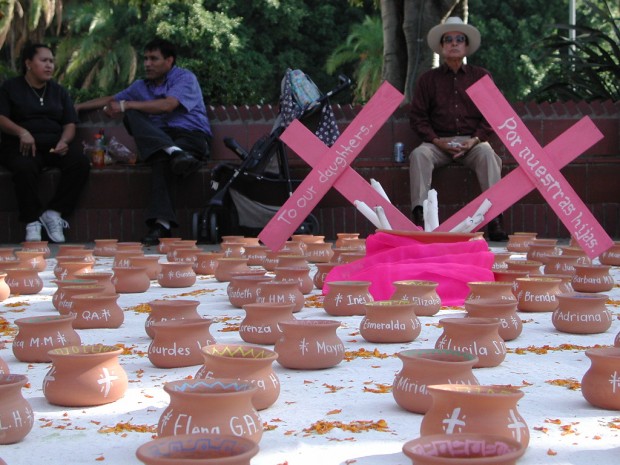 Mexico’s secretary of state, Alejandro Poire, will unveil the finished memorial for the women slain in Ciudad Juarez Thursday, according to state officials. The structure has been in the works since the Inter-American Court of Human Rights issued a sentence in December 2010 requiring a memorial for the eight girls and young women killed in November 2001. The sentence also required the Mexican government to reopen the investigation into the “cotton-field” slayings, as they have come to be called.

Since 1993, the small border town of Juarez has been overcome by waves of murders, most of which have been attacks against women. Human rights activists estimate the number of slain women is in the thousands.

After surveying 155 killings out of 340 documented between 1993 and 2003, a government committee found that about half involved domestic violence, robbery and gang wars, while one-third of the murders were resulted from sexual assault.

The dedication will take place at Paseo de la Victoria and Ejército Nacional and the governor of the Mexican state of Chihuahua, which encapsulates Juarez, will also be in attendance. While the memorial is a kind — albeit required — gesture for families of the victims, it does not take the place of the ongoing investigation into the murders, Juarez criminologist Oscar Maynez said.

“The authorities are hoping that with more time, people will forget about the murders,” Mayneztold the El Paso Times. “This event is meant to distract from the serious aspects of the murder cases. We still have pending the allegations that the government wrongfully fabricated two suspects in the 2001 case, among other things.”

Murders of girls and young women in Juarez have continued in recent months, as experts say the violence against women in the so-named “Murder Capital of the World” is worse than ever.

Related Items
← Previous Story The Spaces Between Us: Off-site at the DNC, Jesse Jackson speaks of need to 'democratize democracy'
Next Story → Voices Marginalized at the DNC: WorldCantWait.net