Salam in the City – The Feminist Wire

Home / Politics / Salam in the City

Salam in the City

I’m told that I’m a stickler for formalities. My house on Rockwell Street in Chicago was its own sovereignty, where no closed doors (there were not many) went un-knocked before entering. No entry to the house went unacknowledged. No one ever left home without saying, “see you soon.” My parents’ friends or older relatives would call – most times interrupting my dial-up scramble for guitar tabs or pictures of neat and glamorous dreadlocks (to once again try to convince my parents to let me have them)- and as I squeaked hello, each would greet me with, “AssalamuAlaikum Wa Rahmatullahi Wa Barakatuh (Peace be unto you and so may the mercy of Allah and His blessings).” I would turn down the pounding drums and chords in the background and in my best, most formal voice respond, “Wa Alaikum Assalam.” At the mosque, social gatherings, and in my home, it was with ease that I could acknowledge myself as Muslim by merely responding to Salam in kind. As a child, it was an easy thing to do, returning this greeting of faith. Oftentimes, the expectation was simply to respond.

Leaving Chicago for New York City as an adult, I took my guitar, fiction and poems, my looong black and brown braids and my tightest black jeans. I packed my Qur’an, my prayer mat, and Surahs too. In New York, I went to shows, studied history, fiction, and music, started working at a clothing store and made friends from cultural backgrounds just as diverse and full of historical exceptions as mine. Being a first-generation American, born to devout Muslims of Ghanaian and Nigerian backgrounds with memories older than the countries from which they emigrated, I have always made it a point to continuously acknowledge and analyze the contexts in which I find myself. It is due to the importance of the stories my father shared with us, the traditions my mother has passed on to my siblings and I, and their pride in their faith and journeys that I do so.

On occasion, as I danced around my job jamming to hip-hop, proud that these artists had opened a few songs with Islamic greetings, some version of the following scenario would occur. I would be walking around organizing mountains of clothes, braids out, my tightest jeans on (probably wearing my weight in necklaces), when a woman, a Muslim women, identified through a series of signifiers, would come into view, either passing right by or asking me for assistance. In that moment, I would play out the scenarios of saying Salam in my head, in which the worst result involved deafening silence from the other party. Awkward. Fearing my less-than-pious appearance would mark my Salam as insincere, I’d usually say nothing at all. Rather, returning to my tasks as usual, I’d feel guilty. Guilty as though I had not fulfilled an obligation that normally makes me feel connected to my peers in Islam.

Where I’m from, when someone enters a room they are expected to greet everyone with whom they are familiar, beginning with the host. If someone greets you, and you happen to be seated; unless bound, physically impaired, elderly or ill, you are expected to stand. Eye contact is a must, physical contact a great plus. The importance of respecting someone’s presence and the practice of inviting him or her to share one’s personal space is one of the more important traditions I continue to engage. I often kicked myself at the fact that saying Salam to strangers was so difficult for me.

For three years I’ve lived around the corner from a bodega and what would become my favorite restaurant, a late-night spot serving Middle Eastern and Mexican cuisine. I corresponded with the owners of both places, three brothers from Yemen, on pretty regular basis. After three years, it was not until my gorgeous, tattooed and pierced Palestinian and Egyptian Muslim friend, Sophia, began speaking to them in Arabic one night that they realized we shared a faith. She greeted them with a Salam and right away they knew I was Muslim too. There was none of the stark silence I had feared. No table flipping, no criticism, no quoting of the extensive Qur’anic scripture I’m sure could be interpreted to caution against a woman in tight black jeans like me. And so, I’ve slowly gotten over my hesitancy about Salam-ing to new people. I began to greet fellow Muslims, even at work, and I’m happier and healthier because of it.

Months later, after a late night out and brief stint on the train, nature came calling loud and clear while my aforementioned friend and I were pretty far from home. After being invited to use the restroom at what was probably the coolest Reggae and Calypso shop in Brooklyn (after being teased, of course), we looked around for a cab. Sophia spotted a town car parked by the curb. The driver, outfitted in a Kufi and what looked to be a Thobe, both traditional Muslim clothing for men (who says Muslim men don’t cover their hair?), looked out of the window and smiled reassuringly. We immediately decided to take this car. As we clambered in, my friend immediately said Salam, and after the tiniest hesitation I said Salam as well. His name is Ibrahim. He is from Guinea. He and my friend spoke a bit in Arabic as I tried piecing together the dialogue. We all then spoke a bit in English. Next, my friend and I tried our best to continue the conversation in French.  Finally, Ibrahim settled on Italian to share his particular experience as an immigrant to the United States.  I got the majority of it. It was in this exchange that we were able to share thoughts and opinions and stories with Ibrahim. I wonder, had we not began with Salam, if we would have had such a meaningful conversation; one that cleared the language barriers at its very least.

At the end of the day, my Islam is my own. It wakes me with ease after crazy nights out, calms me as I cross busy city streets, and inspires me to always think bigger, to explore and create with passion. Growing up, I was able to experience the amazing community that my Islam afforded. From the amazing bonds forged by children in Arabic school, to the huge Muslim family traditions sustained through Eid celebrations, and the incredible unity that allows us to mourn, reflect, or celebrate major events together. So though it took a long time to reconcile, especially in a lonely city like New York where the opportunities to share and partake in something greater, to belong and believe sometimes feels so hard to grasp; it only makes sense, saying Salam. 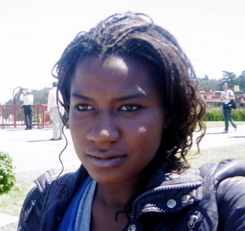 Related ItemsPoliticsreligionU.S.World
← Previous Story The Hijab on the Pitch
Next Story → In honour of the leadership of US-born African-American/African-Caribbean/African-Latin@ Muslim women in responding to HIV/AIDS