“how come you don’t cover your hair?”

my breath punches out of me in one big gasp

as I pretend not to hear her

“so how come you don’t cover your hair like all the women in your country?”

she asks me again

persistent, insistent, she is unaware that there is any problem with her question

I am slow to answer

trying to sort out what just happened

we were talking about our lives as immigrant women

the search for the better life that somehow deflated into disillusionment

she, was an art history professor back in India

my father, a mechanical engineer in Pakistan

she works for a janitorial company cleaning offices

Mohammed was too Muslim sounding a name in a country

we were connecting across our commonalties

and now i am left shocked

from a woman who looks like she could be my sister

we are technically from different countries

but we are both Punjabi

we speak the same tongue

some do and some don’t

I want to tell her that in Pakistan, women have always been on the frontlines of the struggle

standing down guns, tanks and the ever increasing and terrifying presence of

our heads may be covered or uncovered, but we have always held them high

and cannot be defined by Islamophobic headlines that reduce us to sound bytes about gun toting mullahs, home grown terrorists and corrupt politicians

we are a country where lawyers, particularly women, were willing to lead a revolution against tyranny that electrified the world

I want to tell her that in Swat

yes in Swat, that supposed hot bed of terrorism and “uncivilized” chaos

I want to tell her that on any given day

which for us has become the war of terror,

a war now rebranded with a new name – “AF-PAK”

on any given day, entire villages are blown up by remote controlled drone aircraft

who then goes home to his wife and kids

I want to tell her that those Pakistani women that she imagines as one faceless, nameless unknown entity with covered hair and silent voices

look just like her from the cockpit of a U.S. helicopter gunship 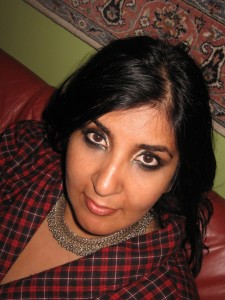 Author Bio: Amal Rana is a Jeddah born, Pakistani Muslim activist and poet who draws inspiration from the works of warrior poets such as Faiz Ahmed Faiz, Pat Parker, Jewelle Gomez and many others who may not yet be widely recognized but whose words are no less powerful. In a time when even exhaling while being Muslim seems to have become a crime, she sees poetry as an act of sedition and collective resistance. Her work has been published in various places but fits best in grassroots zines and on the streets. Amongst other things, she spends her time helping make puppets and street art that reflect the true nature of dictators and other evil doers while working with other Pakistanis to seek real “hope” and “change” in Pakistan instead of democracy “Amreekan” style. She believes humour and love are an essential part of any revolution and that simply by existing and speaking to our own realities as Muslim women, we are being radical.

Related ItemsCulturePoetryPoliticsreligionUSWorld
← Previous Story In honour of the leadership of US-born African-American/African-Caribbean/African-Latin@ Muslim women in responding to HIV/AIDS
Next Story → Reframing the Discussion: Concluding Thoughts on the Forum on Muslim Feminisms.