The Heart of SB 1070: Racial Profiling – The Feminist Wire

The Heart of SB 1070: Racial Profiling

On Monday, June 25, 2012, the U.S. Supreme Court issued its ruling on the constitutionality of Arizona’s anti-immigration law, SB 1070. The architects and proponents of the law claimed victory; the reality is that the Supreme Court aimed a partial yet significant blow to SB 1070. Arizona Governor Jan Brewer’s statement that “the state of Arizona and Senate Bill 1070 was vindicated and the heart of the bill was upheld” is troubling and misguided. The Supreme Court’s decision to uphold the section of the bill that allows law enforcement to ask for documentation when there is “reasonable suspicion” that an individual is in the country illegally codifies SB 1070 as a racial profiling law. Taking Brewer at her word makes section 2(b) the “heart” of 1070. 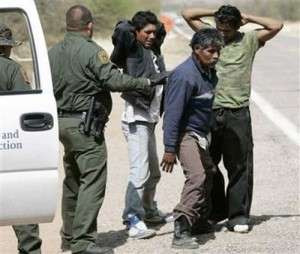 The question before the court in Arizona v United States was whether federal law preempts and renders invalid four provisions of the law. The Supreme Court in a 5-3 decision (Justice Kagan recused herself from the case) ruled that the Federal government has broad, undisputed power over immigration and naturalization.  The decision, written by Justice Kennedy, makes very clear that Arizona may not pursue policies that undermine federal law. However, the court was not persuaded that the Arizona statute interferes with federal immigration law. The court left the door open for further litigation, given that under Federal regulations, law enforcement officers cannot consider race, color, or national origin in asking for documentation and must implement law in ways that are consistent. In short, once the law is implemented, the Court could revise this ruling.

The Supreme Court ruling is hardly a victory for Governor Brewer, Russell Pearce, Sheriff Joe Arpaio, Attorney General Tom Horne, and other Arizona Republicans, no matter how they try to spin it.  But the ruling still presents risks for Mexican/Latina/Latino communities in Arizona and the country more widely.  As of June 26, 2012, police officers conducting routine stops can demand documentation if there is “reasonable suspicion” that a person is in the U.S. “illegally.” An officer determines “reasonable suspicion” if an individual does not have a U.S. driver’s license, is driving a car with foreign plates, is nervous, or does not speak proper English. How can this not be racial profiling? I doubt many (white) Canadian snowbirds will be stopped, while likely targets will be cars with Mexican plates. This is, precisely, the section of the statue—perhaps the “heart” that Brewer alludes to—that inflicts fear among the Mexican/Latino community, regardless of immigration status, or whether a person has been in the U.S. a week, or can trace their ancestors in this country to the nineteenth century.

Most analysts agree that a significant intention behind SB 1070 was to arrest undocumented immigrants (as the growth of private prisons can attest) and to gear toward massive deportations of Latinos. The law’s framework makes possible implementation of a policy of “enforcement by attrition” by creating such an antagonistic environment that immigrants decide to leave or, as Presidential candidate Mitt Romney (whose father was born in Mexico) puts it, self-deport. This is a heartless policy that has resulted in the brutal separation of families and in trauma among Mexican American communities in Arizona and neighbor states. It is particularly insidious given that families often have members with different citizenship status. Enforcement by attrition promotes the deportation of U.S. citizens, including children. 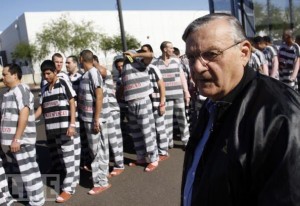 The Federal government’s enforcement at the national level, and Sheriff Joe Arpaio’s raids in Hispanic communities in Maricopa County, result in an anti-immigrant climate and a significant human rights toll. The report Shattered Families by the Applied Research Center estimates that there are more than 5,000 children in foster care due to their parents being deported. For example, the report documents the story of two New Mexico sisters whose children were placed in foster care after the authorities received a tip that the sisters had drugs in their trailer home. ICE agents called child protective services even though they did not find any drugs in the home nor evidence of child abuse or neglect. The sisters were deported and the children placed in foster care. The mothers do not know where their children are. In Arizona, sheriff’s deputies in Maricopa County routinely carry toys that they offer to children to calm them down while their parents are being arrested.

My reading of the Supreme Court decision is that the court will not enjoin section 2(b) unless there is evidence of civil rights violations. This “logic” might make “sense” from a legal standpoint, but it is incomprehensible on moral grounds. The Justice Department recently found that Maricopa County Sheriff Joe Arpaio has repeatedly violated the civil rights of Latinos. These violations are devastating to a community that must live with incessant threats of being stopped for driving with a broken tail light, arrested, incarcerated in ICE Detention centers, and even deported. These policies are clear human rights infringements in that they violate articles 2, 3, 6, 7, 8, 9, 10, 11, 12, 13, 14, 23, and 28 of the Universal Declaration of Human Rights.  Why wait to act until more people are racially profiled, more families harmed, more human beings imprisoned or deported? 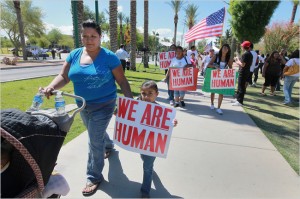 We must remember that any violation of human rights is also a feminist issue. Concern about women’s and children’s security, safety, and bodily integrity is an important aspect of women of color and transnational feminist politics and struggles. Living in fear of being arrested and losing one’s children is an insidious form of insecurity. This is not a humane or feminist way of life.

Social justice is fulfilled when societies work for the benefit of the society as a whole, and not only for the interests of the powerful and what is politically expedient. The well-being of communities can be achieved via an agenda that focuses on the rights of all members of society globally to have access to the means to satisfy their material needs (food, clothing, shelter, employment); their intellectual needs (recognition of multiple ways of knowing and cultural practices); and their personal well-being (to live life without violence and persecution). SB 1070 fails on all of these counts.

As the Supreme Court made clear in overturning much of SB 1070, immigration regulation is the function of the Federal government. In spite of conservative rhetoric on right-wing radio, President Obama did not personally overthrow SB 1070: the Supreme Court found most of the law unconstitutional. What this means is that both Congress and the White House must act. The Obama Administration has been very slow in developing comprehensive immigration reform that would create a path to legalization for the eleven million migrants who need to stabilize their immigration status in the U.S. While it is true that the Obama Administration and the Justice Department denounced SB 1070 and sued the state of Arizona, which resulted in last week’s decision, collectively their actions have not unfolded within a human rights framework.

President Obama, who promised during his 2008 campaign that he would introduce comprehensive immigration reform during his first year in office, has not produced much in terms in terms of legislation. What he has done has been limited from the perspective of ensuring both resolution of the immigration controversy and securing at least limited rights for immigrants. For example, in 2010 he advocated for passage of the Dream Act, which passed in the House but was filibustered in the Senate. And on June 15, 2012, Obama issued an executive directive to the Department of Homeland Security that young people eligible for the Dream Act would have a two-year work permit and would not be deported. Moreover, on the day the Supreme Court issued its “racial profiling” decision, the White House rescinded 287(g) agreements for Arizona law enforcement entities, signaling that enforcement of SB 1070 is carried by racially profiling people of color. 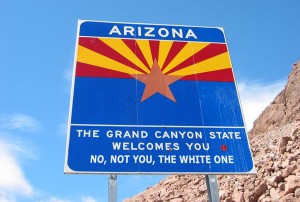 Those of us who are eligible to vote should do so, and we should make both major political parties accountable. Elected officials should be held responsible for the lack of action on comprehensive immigration reforms that leads to legalization. The Federation for American Immigration Reform (FAIR), an anti-immigrant group that backed and assisted in the writing of SB 1070, understood quite well that the Supreme Court might send the ball bouncing back to Congress, and is currently advocating for passage of a national racial profiling law similar to SB 1070. FAIR is also focused on electing Republican candidates with strong anti-immigrant credentials, such as those we have in Arizona. And let’s not forget that Mitt Romney, during the Republican primary, said that SB 1070 should be the model for legislation at the national level; he also promised to veto the Dream Act.

Thus, human rights advocates need to be especially vigilant about the type of immigration reform proposed at the national level. Yes, I am frustrated with the lack of progress on immigration during the Obama administration. But slow movement toward any progress, including rights for immigrants, is preferable to the plethora of Republican candidates who answer to the most conservative forces in our country represented by the Tea Party and its ilk. 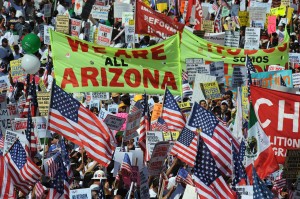 This is why voting is important, but sadly, it is not enough. We also need to mobilize. Immigrant rights organizations, Dreamers, community-based organizations, human rights NGOs, and faith-based groups have proven that mobilization and organizing achieve results. Feminist communities both in and outside Arizona need to join their voices and bodies to fight what is, at heart, a “racial profiling” law. The founder of FAIR, John Tanton, has advocated for the sterilization of women of color. A significant aspect of anti-immigrant sentiment rests in demographics; a pervasive fear of the “browning of America” fuels anti-immigration. The same forces that write anti-immigration laws and policies also attack women’s reproductive freedoms.

SB 1070 denies Mexican-American communities and families the basic rights of freedom of movement and security. It is people of Mexican descent in the U.S. who suffer from racial profiling as they are marked as not belonging due to their accents, the cars they drive, and the composition of their families. The heart of SB 1070, racial profiling, survived the scrutiny of the Supreme Court. Let’s not wait until there are massive deportations, more separation of families, and more communities living in fear to completely repeal SB 1070. Social justice and morality call for action now. It is heartless to do otherwise.

C. Alejandra Elenes is Director of the MA Program in Social Justice and Human Rights and Associate Professor in the School of Humanities, Arts & Cultural Studies at Arizona State University. Her works centers on the application of borderland theories to study the relationship between Chicana culture and knowledge, and how it relates to pedagogy and epistemology. She is the author of Transforming Borders: Chicana/o Popular Culture and Pedagogy (Lexington Books, 2011), and co-editor of the anthology Chicana/Latina Education in Everyday Life: Feminista Perspectives on Pedagogy and Epistemology (2006) (winner of the 2006 American Educational Studies Association (AESA) book critics’ award) and of the special issue “Chicana/Mexicana Pedagogies: Consejos, Respeto y Educación in Everyday Life” for the International Journal of Qualitative Studies in Education (2001). She has published articles in feminist and education journals and in a variety of books on Latin American Studies, Chicana/o Cultural Studies, and Education.