License to Pimp – The Feminist Wire

When there is talk of workers’ rights and labor laws, most of us have already formed a specific image of the workers in question, and some, even if vague, idea of possible legislative inequities. In her upcoming documentary, License to Pimp, filmmaker Hima B. challenges mainstream perceptions of labor rights revealing the gender discrimination and misogyny at the root of work practices in strip clubs. The three women at the center of License to Pimp tell stories that situate the workplace dynamics in clubs and the decisions made by dancers in the context of the global devaluation of women’s work. Hima B. courageously documents protest in a historically contentious site for gender politics, the strip joint, and raises important questions about what happens at the intersection of sexual expression, female bodies, work and capital. 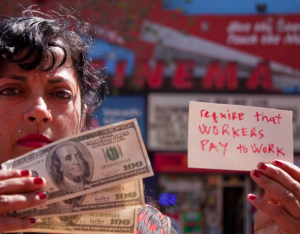 Filmed in San Francisco, New York, and Los Angeles, License to Pimp chronicles the battles strippers face as their places of work transition from strip clubs to, essentially, brothels. The primary cause for this shift is the stage fees strippers are charged in order to even be able to dance in clubs in the first place. Dancers must, in effect, pay for the right to work. Stage fees can cost a stripper a minimum of $100 or more per shift, and are derived from workers’ tips.  This fee is compounded by the fact that strippers are not paid a minimum wage. Both of these acts are, by the way, illegal. As it is extraordinarily difficult to meet the stage fee requirement and leave a shift with any earnings of their own from just stripping or lap dancing, License to Pimp shows how women struggle with the alternatives. In the film, Lola quickly realizes that her co-workers are making up the financial shortfall by prostituting in the clubs – a decision that although not always verbally mandated by male club owners, is endorsed in other ways beyond the leveling of stage fees. For example, when Hima speaks to a strip club manager about the cameras in private rooms, he tells her they are less a means of security and more a tool used by the club to demand additional payouts based on the prostitution they observe occurring between strippers and customers in these rooms. Women who choose not to engage in prostitution are often ultimately pushed out of employment in clubs because they are generally unable to make the cost of the stage fee, and/or feel increasingly uncomfortable with the brothel-like atmosphere prevalent in the club. The choices women working in strip clubs must negotiate can seem foreign to anyone unfamiliar with the adult entertainment industry and the contradictory priorities that can emerge in the lives of working women. 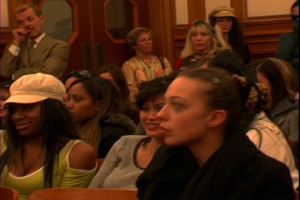 Daisy Anarchy, Lola and Mariko, the characters animating the central narrative threads in License to Pimp, reflect three very different responses to the illegal labor practices in San Francisco strip clubs. Each respectively fights, adapts to, and quits the clubs.  Part of the brilliance of Hima B.’s documentary lies in her non-judgmental approach to each woman’s strategic response, and the longitudinal lens through which we are able to fully comprehend the complexity of their circumstances. The documentary covers 8 years in the course of the rising tension between strippers, club owners, state legislators, law enforcement officers and the general public. Daisy Anarchy decides to formally fight the system by demanding that local and state agencies protect strippers’ rights as employees. Lola is an underage Latina immigrant who feels forced to cross the line she has established between exotic dancer and prostitute when her mother needs ongoing cancer treatment and her income becomes critical to supporting her family. Lola’s story is innovatively and provocatively brought to life through animation to conceal her identity.  Because she was previously retaliated against by the club, she wants to prevent further backlash against herself and her family for coming forward with her full story. The documentary also follows Mariko, a UC Berkeley educated Asian American woman, as she maneuvers through the sex work industry on her own, working for herself, as she is determined to maintain as much control as possible over her clientele and the retention of 100% of her earnings. In addition to Daisy, Lola and Mariko, Hima B., inserts her own experience as a former stripper faced with the same illegal, intimidating and dangerous labor practices that challenge her protagonists.

What is made abundantly clear in License to Pimp, however, is that the stories do not end and begin with these four vastly different and uniquely brave women. It is the honesty in Daisy, Lola, Mariko and Hima’s stories that expose the thousands of other women who, whether silent or vocal, must contend with a type of gender-based workplace discrimination that, in many ways, goes unnoticed by the rest of society. The social meanings and social values attributed to women who work as exotic dancers prevent them from being seen as engaged in legitimate work in the first place, let alone worthy of employment rights. But, License to Pimp, in telling full and richly textured stories does not allow the viewer to make loose assumptions about the underlying intentions of the strippers who demand labor equity, nor does the film make it easy for us to draw lines between these so called conscious or progressive strippers and those strippers who supposedly contribute to workplace violations. The tangle of labor laws and the ability of club owners to define “rights” through methods that further exploit women is shown in License to Pimp in ways that demonstrate why some strippers resist the push to be classified as employees and instead opt to be misclassified as independent contractors. These women would rather find space to move within the shift from strip club to brothel rather than fight from within the legal system. Savvy and greedy club owners soon realize that when strippers win the legislative battle to become newly classified employees, they can simply alter the terms of their power over strippers by demanding, as their employers, that they meet lap dance quotas and fulfill other minimum shift requirements that simply take the place of the stage fees and non-existent minimum wage.

Although Hima B. primarily sets her camera down in San Francisco’s strip clubs, the issues that License to Pimp brings to the forefront are not confined to the boundaries of any one city, state or nation. In Lola’s story, club owners find it much more lucrative to fire the majority of their Black and Latina workforce to hire younger white & Asian women who previously worked in massage parlors and escort agencies. License to Pimp may appear to have a very localized and specific focus: the stories of three women working within and through strip clubs in the San Francisco area, but the trajectory of Hima B.’s vision includes all workers in global capitalism. All of the women working under the moniker “stripper” – whether brown, black, poor, white, working class, or undocumented – take center stage in clubs and in the broader geopolitical scene as unprotected subjects of state control and discipline as they fight in variously legible ways to receive legal protection from the state. The questions of race, gender, value and respectability that track the women in this film like persistent shadows, are questions that we all, albeit differently and with drastically uneven consequences, must confront and resolve regardless of where and how we work. I am writing this review in support of Hima B.’s vision and with much love and respect for Daisy, Lola, Mariko and all of the other women who labor in ways that are unrecognized as work, demanding protection for their bodies and spirits in the process.

License to Pimp is in the midst of a monumental Kickstarter campaign that ends on July 18th. Hima B. needs to raise a total of $30,000. She has finished shooting the film but must now complete a rough cut of the documentary to make sure that these stories make it out and into the world. License to Pimp has to be made and must be seen. Gender, class and race-based oppressions formed through the social construction of deviant and acceptable sexuality, are part of the foundation of global capitalism. However you experience, or ignore, its impact, the stories of the women in this documentary move us to contemplate ever new ways to plot reinvention, subversion and, maybe even, revolution. 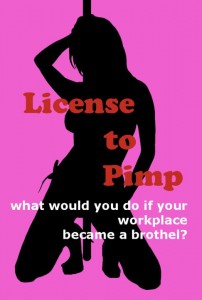 Please see below for more information on License to Pimp and Hima B. and, most importantly, to support the campaign to finish the film.