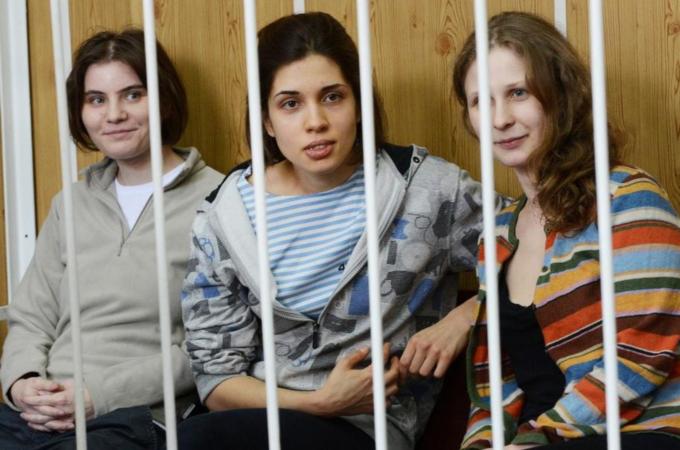 When the women of the Russian music group Pussy Riot played what they called a punk prayer, “Mother of God, Cast Putin Out!” inside Moscow’s Christ the Saviour Cathedral in February, they expected to be stopped. They did not expect to be jailed. But three members of the band – Nadezhda Tolokonnikova, Yekaterina Samutsevich and Maria Alekhina – now languish in prison facing up to seven years in jail if convicted of “hooliganism on the grounds of religious hatred”.

Arrested in early March, a judge ruled in July that their pre-trial detention could last until January 2013, but they will know their fate before then. Their trial is scheduled for July 30.

When it charged them in July, the case launched by the prosecutor general’s office in Moscow included “appearing in the Russian Orthodox Church’s main church, Christ the Saviour Cathedral, inflicting significant damage on holy Christian values, encroaching on sacredness of sacraments, and ignoring calls by the church’s candle-bearer to stop sacrilege”. Prosecutors also said the band “unlawfully entered the enclosed space in the church designed for holy religious rites, thus blasphemously humiliating the Russian Orthodox Church’s centuries-long traditions”.

The case has attracted hundreds of supporters who gather outside the court on hearing days and have demonstrated in solidarity with the performers. Amnesty International has declared the three women to be prisoners of conscience and demanded their unconditional release. In recent concerts in St Petersburg and Moscow, Anthony Kiedis, lead vocalist of the Red Hot Chili Peppers, wore a “Pussy Riot” T-shirt and members of the band wrote letters of encouragement. Alex Kapranos of the Scottish group Franz Ferdinand also voiced support for the group while performing in Moscow.

The lawyers contend that the prosecution of their clients is about Putin displaying his power, and believe their clients will be convicted no matter what the law says. Many Russians liken the case to that of jailed businessman Mikhail Khordokhovsky, who many believe to have been imprisoned primarily because of opposition to the Kremlin rather than for crimes against the state.

Versilov says Putin is using Pussy Riot as an example to others not to challenge his rule. “To him [Putin], it was basically a landmark point in the evolving Russian protest. After 100,000-plus people demonstrated against him and public rallies, which began happening in December, he saw that people are protesting in really creative, really bright, really strange ways, and it’s probably went through his mind that a stop must be put to this.”

The defence is hoping that the public outcry about the jailing and possible conviction of the women will continue to grow stronger, both here in Russia and internationally.

In what could be a glimmer of hope, the Moscow court ruled that the trial, which begins July 30, should be transparent, with proceedings broadcast online. Pussy Riot’s lawyers are sceptical, saying this is usually only done in cases of terrorism and are concerned it might be a ploy to keep independent journalists and TV cameras out of the courtroom.

The prosecutor general’s office has not commented publicly on the case since it referred it to court. The Russian Orthodox Church says it will not comment until the court has ruled.

Related Items
← Previous Story The Politics of Celebrity, Social Media, and HIV/AIDS
Next Story → Sisters in Cinema: Where are the Black Women Film Directors?