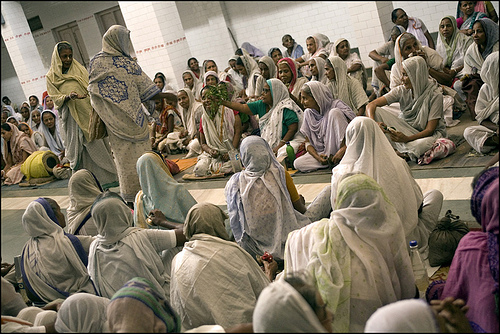 Widows flock to the Indian holy city of Vrindivan seeking ashrams for shelter. Often these so-called shelters force women into prostitution and expose them to sexual violence.

Widows in India have a pronoun problem. The estimated 40 million women widows in the country go from being called “she” to “it” when they lose their husbands. They become “de-sexed” creatures.

Clearly, it’s more than a problem of language, although that discrimination goes further, with epithets such as “husband eater” used against them. In the northern Indian state of Punjab, a widow is referred to as randi, which means “prostitute” in Punjabi. In this region, they usually arrange for the widow to marry her deceased husband’s brother because being owned by a man is a way to avoid being raped.

“Widowhood is a state of social death, even among the higher castes,” says Mohini Giri, a veteran activist in the fight for women’s rights who was nominated for the Nobel Peace Prize in 2005. She is also the director of the Chennai-based social work nonprofit organization Guild for Service. “Widows are still accused of being responsible for their husband’s death, and they are expected to have a spiritual life with many restrictions which affects them both physically and psychologically.”

Although widows today are not forced to die in ritual sati (burning themselves on their husband’s funeral pyre), they are still generally expected to mourn until the end of their lives. According to 2,000-year-old sacred texts by Manu, the Hindu progenitor of mankind: “A virtuous wife is one who after the death of her husband constantly remains chaste and reaches heaven though she has no son.”

Widows seem to follow rules based on tradition because they have internalized them. They keep doing what other widows did without asking, resigned to a kind of fate—such as placing restrictions on their own diets. Orthodox Hindus believe that onions, garlic, pickles, potatoes, and fish fuel sexual passions by stimulating the blood, but these are the same foods necessary to avoid malnutrition or even death. For India as a whole, mortality rates are 85 percent higher among widows than among married women, according to research by the Guild for Service.

In some of the ashrams in Vrindavan, the same protection that young widows seek hidden in courtyards is misshapen into sexual exploitation. The heads of some ashrams use their power to force young widows into prostitution in order to earn themselves “extra” money.

And what happens to those who become pregnant after being raped? Khanna explains clearly: “These widows are mauled by quacks for a painfully searing abortion,” she says. “If that’s not done, then they would have an extra mouth to feed and an extra pair of hands to beg.”

The basic precepts that allow for this constant abuse of widows have also allowed their abusers to escape punishment. Impunity for those who commit violence against widows is widespread.