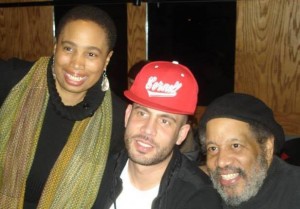 Michael Simmons, my father, comrade, and friend, was the first man I knew who championed women’s rights and the rights of LGBTQ (Lesbian, Gay, Bisexual Transgender, Queer) people.  All of my and my brother Tyree Cinque Simmons’s (a/k/a DJ Drama) lives, he taught us that when it comes to the issue of rape and sexual assault, a woman never everloses the right to say “no,” even during the act of sexual intercourse. Long before it was in vogue, my dad was among the few men who took the position that men have an obligation and responsibility to take up with other men the issues of rape, sexual assault, and other forms of violence against women. In my feature length film NO! The Rape Documentary, which unveils the reality of rape, other forms of sexual assault, and healing in African-American communities, he says:

It’s not just enough to be a principled person with women. [Men] have an obligation to challenge the behavior of [their] peers…

A man can go out with a woman. [He] can spend all of his money. She can promise to give it to him. They can go to a room, house, apartment, hotel, or whatever and take a shower together, and start playing around together and start actually doing it. She never looses her right to say no, even during the act.

Similarly he was and is adamant that heterosexual people have an obligation and responsibility to challenge and address heterosexism and homophobia with other straight people. His belief was and is that until the privileged, even within the margins, disturb the peace at the picnics of injustice, none of us will be free.

For almost 50 years, Dad has been at the forefront of numerous struggles and movements for civil and human rights for marginalized and oppressed people in the United States, and numerous countries in Europe, Africa, Asia and the Pacific Islands, South America, and the Caribbean. Many begin his activist timeline when he was a foot soldier in the Student Non-Violent Coordinating Committee’s (SNCC) West Helena Arkansas project. However, he goes into detail about the origins of his activism, which date back to his union shop steward mother Rebecca White-Simmons-Chapman, his father, John W. Simmons, Sr., and two of his older brothers John Ali (who was the first National Secretary of the Nation of Islam under the Honorable Elijah Muhammad) and Nathaniel “Nate” Simmons, Sr. in his Arkansas Roots and Consciousness chapter in Arsnick: The Student Nonviolent Coordinating Committee in Arkansas. There are many courageous acts that my dad has performed on his journey called life. One of the most profound acts to me was his refusal to fight in the United States War against Vietnam. In his 2003 “Black Man Fights The Draft” interview conducted by Mario Hardy with the Central Committee for Conscientious Objectors, Michael shares:

[…]because of the Civil Rights Movement, and because of the influences of people like Malcolm X, along with some things that were happening in Philadelphia in the early 1960s, I had made up my mind in high school that I didn’t want to go into the military even if there hadn’t been a war, and clearly I wasn’t going to fight anybody. But my intent was to try to avoid the military and jail, because I didn’t want to go to jail either.

When I got out of high school, I did register for the draft, because I didn’t know any better, and then I started college. During my days in college there was no problem, but I went to college for two years and then I dropped out and went down south and joined the Civil Rights Movement. That’s when I started being hassled by the government in terms of reporting [to the draft board] to take my physical, and the other stuff that I was supposed to do.

It was at that point that I started playing games with the draft board. For example, I used to write these very long letters on Black History, and right in the middle of one of these 12 page letters, I would mention a change of address. Unfortunately, the person who was handling my case was rather astute, so that didn’t work… 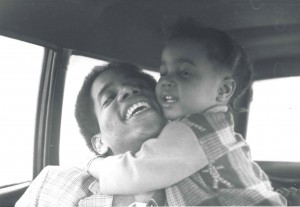 His refusal to participate in the murder of Vietnamese women, children, and men resulted in him serving 2 ½ years in prison, when, according to him, the average (White) draft case only served 1 ½ years. I was barely five months old when he began serving his term on September 4, 1969 and a couple months shy of turning three-years old when he was released in February 1972.  Coincidentally (or karmically), my mother (Gwendolyn Zoharah Simmons), his ex-wife and life long comrade, was a member of the first American NGO (non-governmental organization) delegation, sponsored by the American Friends Service Committee[1], to go into Vietnam and Cambodia right after the war ended. 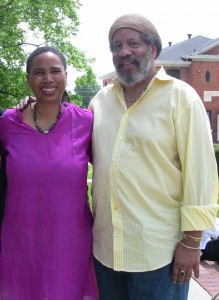 What’s awe inspiring to me about my dad (and my mom) is they work diligently not to rest on their laurels. They keep evolving and transforming.  It’s not about what they did 15, 25, 35, or even 45 years ago.  It’s about what they are each doing today to make this world a more humane and compassionate place for all of its inhabitants.  Centralizing the margins within the margins and resistance against injustice while working for peace and justice everywhere is in my blood.

My daughter is an African-American lesbian who made a film on homophobia, racism, and sexism. She was in South Africa for two months monitoring the (first “free and fair”) elections. She was in Mississippi a couple months ago taking pictures of African-American women who struggled in Mississippi. I say that not to brag about her, but to say that she is one of many…” ~ Michael Simmons, In My Father’s House

I love that Father’s Day is in the same month as LGBTQ Pride.  It is literally impossible for me to celebrate Pride without celebrating Dad. For some, it’s hard to grasp that I credit my dad for his role in my being a radical Black feminist lesbian. He, like my Mom, taught me that Black and feminist were not contradictory identities.  Equally as important, when I was struggling with coming to terms with my identity as a lesbian, Dad was a lifesaver.  In June 2011, on the occasion of my 21st anniversary of being out as a lesbian, I wrote about his life altering contribution to my coming out as a Black feminist lesbian in Reflecting Upon My Twenty-One Years Of Pride, which Scholar/Activist/Cultural Critic Mark Anthony Neal published on his NewBlackMan blog:

[…]When I was eighteen in my senior year in high school struggling with my sexuality, [my father] asked Cheryl Dowton, an out Black lesbian to talk to me about being a lesbian. My father didn’t want me to think that being a lesbian was a bad thing. Equally as important he didn’t want me to think that becoming a lesbian would mean that I would have to give up my racial identity. So it was extremely important to him that I have the opportunity to talk with a Black lesbian about all of my questions, anxieties and fears.

Having the opportunity to talk with Cheryl allowed me to literally see that Black and lesbian were not contradictory identities. Even with my having a girlfriend in my senior year in high school, I was SO afraid that my connecting with Cheryl, didn’t enable me to fully embrace my authentic self until three year later…

In 1996, I produced and directed In My Father’s House, a very grassroots, no budget, short video, which, through self reflection and conversations with my dad, my brother, and Yvonne Marie Jones, one of my best friends in high school, I explored my coming out process.

Since the video’s world premiere at the 1997 London Lesbian and Gay Film Festival, my dad has been adamantly vocal that it is only in the context of rampant global heterosexism and homophobia that his both supporting and encouraging his daughter’s coming out process is viewed as profound.

This Father’s Day weekend marks my youtube video premiere of In My Father’s House.

*Trigger Warning* In the video, I discuss my rape (which, in addition to being the result of misogyny and patriarchy, is also the result of internalized and externalized homophobia and heterosexism), pregnancy, and safe and legal abortion.

A cinematic perfectionist, I’ve resisted posting In My Father’s House online for years because of its very low production quality. However, given what feels like the never-ending struggles of Black LGBTQ people to be visible and accepted (not solely tolerated) in all of our communities, now feels like the right time to share the video far and wide in cyberspace. I can’t imagine who I would be were it not for my dad doing the compassionately principled act of asking Cheryl Dowton to talk to me when I was in my last year of high school. There are many gifts that I have received from my dad, but the gift of his encouragement, support, and complete acceptance of my being unapologetically out as a Black feminist lesbian is one of those gifts that keeps on giving into perpetuity, in this lifetime.

[1] Founded by Quakers in 1917 to provide conscientious objectors with an opportunity to aid civilian war victims, the American Friends Service Committee’s work attracts the support and partnership of people of many races, religions, and cultures. The organization’s mission and achievements won worldwide recognition in 1947 when it accepted the Nobel Peace Prize with the British Friends Service Council on behalf of all Quakers.