My Father’s Daughter – The Feminist Wire

When I was a child, I lost one father and gained another. Damaged and blessed simultaneously, as many of us are, my girlhood was shaped by both a profound absence and a solid presence. This liminal position, which to some degree I still inhabit, hinged between longing and hope, loss and normality, the past and the future, girlhood and womanhood.

My father—the biological one—did not leave us; quite the contrary. He lost access to my sister and me after taking us away from our mother for several weeks one hot, sticky summer. We lived in the car, crisscrossing Illinois in a state of confusion and fear. Now we understand this as parental kidnapping or abduction; in the 1970s, it was just fucked up.

When we were eventually returned to our frantic mother, one of my clearest memories is of my stepfather, Denny, who was not yet my stepfather. In my version of events, from the moment I stepped out of the police car that brought my sister and me home to Chicago, Denny was there, waiting for us. My parents tell me this is not so, that we didn’t see Denny until much later. But for me, a frightened child, he was there.

After my mom and Denny married, we moved from the city to a small town in Wisconsin. This put us in close proximity to our stepbrothers, who lived most of the time with their mother in a neighboring town in the same school district. It also allowed us to “hide” from my father; we basically went underground for many years—not too difficult an accomplishment in the pre-Internet, pre-cell phone era. We never saw our biological father, and any correspondence went through our maternal grandfather in Chicago.

My adolescent years thus involved an intense, private emotional life alongside my public persona as a fairly ordinary, if slightly odd, girl; a cheerleader with a secret, if you will. Throughout these challenging years—and for the next three decades—my stepfather was there. Denny taught me how to drive, literally and metaphorically. And he has been there—present and supportive and funny and kind—for every important moment of my life: high school heartaches, college graduation, marriages, divorces, the birth of my children, job changes, cross-country relocations, professional successes and failures, smart moves, stupid decisions.

I adore my mother, but it is often Denny to whom I turn when I experience tiny heartaches, emotional tsunamis, life’s crossroads. He centers me, still, just as much as he did when I was nine. Now retired, Denny was a semi-truck mechanic his whole life, and at one point was spokesman for his union. He’s a classic blue-collar guy with a deep sense of responsibility, a man who always puts family first. He wants “suits” and politicians to help the working man (and woman), and he’s frequently disappointed when they don’t. He’s not much of a reader, but he is a genuine people person. He likes to cook and garden, he loves the drag races, and he has a great sense of humor (his Howdy Doody impression is hysterical). 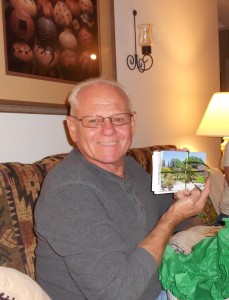 Of course, we don’t always agree, but we rarely argue; both Virgos, neither of us morning people, we’re a lot alike. Recently, in preparation for this article, I asked Denny about parenting, daughters, and feminism.

Monica: How was raising daughters different than having sons?

Denny: Daughters are harder to raise because they’re, um…how can I put this nicely? They’re more difficult at times. Boys, after a certain age, boys take care of their own stuff and just solve it. Daughters, their problems are greater. The way they solve them is just different. You have to be more sympathetic to their needs than you do boys.

What was the hardest thing about raising us?

I don’t really think there were difficult problems when I raised you, outside of the spats, the internal battling between you and your sister. I raised you to be independent. I always tried to tell you to do what you needed to do for yourself, to take care of yourself.

What was the best thing about raising us?

It was fun and exciting.  Watching you evolve into adults was fun.

Is it still fun?

It’s different. I agree with a lot of your points and thoughts. I don’t always agree with all of it, but it’s a hard subject to broach. And it takes a strong person to attack that subject, feminism. Because it’s a volatile thing at times. You do a good job at what you do.

What do you think your role was in helping me to become a feminist?

Are there any major challenges to having a feminist daughter?

I would say, no, but I sometimes think that you’re more to the left than I thought I’d ever be or that you’d be. But I understand the point of being there. It’s something you have to do to accomplish what you want to do.

How has the world changed for girls, either for the better or worse?

I think the world has changed for the better, although it’s not changed as much as it should be in terms of equal pay and those sorts of things.

If you could give one message to me or your granddaughters, what would you say?