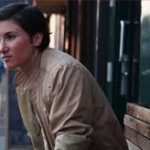 Anna Barsan is a filmmaker and media educator currently living in Brooklyn, NY. She holds a Master’s in Film and New Media from the New School University and a B.A. from the University of Michigan in International Relations and Social Justice. She is co-creator and director of SIGNIFIED, a multi-platform documentary that aims to increase the visibility of the LGBTQ community. SIGNIFIED was invited to premiere its first season with The Guggenheim Lab in Fall 2011 and is currently releasing Season 2 and Season 3, highlighting LGBTQ movements of Latin America, planned for Fall 2012.  Anna has also worked extensively in youth media education directing two short documentaries in conjunction with the non-profit organization Scenarios, USA, which aired on national television with the Showtime Network. Anna currently works as an Adjunct Professor in Film Studies at SUNY Empire State College.

ANNA: As a filmmaker my process is constantly evolving based both upon the project I’m working on, the events in my life, the books I read, the art that I see, the places I travel – it is a reflection, like perhaps any art form is, of our experience in the world, our movement through space and time.

I have to be honest and say that I am still finding my process, or a process. I feel that through my work I have found different layers of my own voice and after their telling, another voice seems to surface with another purpose and so I must begin again.  Despite a constantly evolving process, I find myself returning to film as a meditative medium, as a questioning medium, as a visual essay that a filmmaker can employ to encourage reflection – reflection on ourselves, on society, on the State, on borders and migration, on communication, on the colonization of our minds and bodies, on suffering, on the laws and policy that regulate this suffering, on radical love and reimagining, on existence.

The long history of film used as a tool of revolution, as well as one of suppression, speaks to the influential power of the medium that has been recognized by governments as well as by movements for social change around the world. Frantz Fanon believes that “we must discuss, we must invent” and although the mainstream media attempts to control and greatly limit what kinds of films can be made and distributed, the potential of film as a revolutionary medium, as one for social change, as one for critique and reflection, has not disappeared. My efforts as a filmmaker then are to be intentional, in the subjects that I depict, the topics that I choose to engage with, how I choose to engage them and the ways in which I share this work. In this process I am searching for moments of truth, perhaps moments of transcendence, that might give us the opportunity to reflect upon ourselves and the ways in which our existence is intimately intertwined with everything and everyone else.