I often celebrate and lift up the names of two women–Audre Lorde and Toni Cade Bambara –who are not related to me by blood but whose metaphorical and literal presence had a profound impact on my life. These two women, one of whom I never met and one who became very, very instrumental in my life, transformed me: Audre Lorde, the self-defined Black feminist, lesbian, mother, warrior, poet; and Toni Cade Bambara, the Black feminist, cultural worker, screenwriter, author, who was my teacher, my mentor, and my Big SistaFriend for five years up until her untimely physical transition in 1995.  I believe that we are still in dialogue in the Spirit world.  Both of these women, their existence, and their work created a path for me to use the moving image and the written word to bring about radical progressive social change in this country and beyond.

This Mother’s Day, however, I want to pay homage to some of the women whose blood is flowing through my veins and upon whose shoulders I stand.  I come from a long line of Black women who didn’t use the words “feminist” or “womanist” to describe themselves. However, these women—Lucy Goldsby, Hattie Goldsby Temple, Rhoda Bell Temple-Robinson-Hudson-Douglas, Alice Bostic Simmons, Mattie Garrett Cranford, Maggie Pagen White, Mattie Simmons Brown, Jessie Neal Hudson, Corinne Simmons Trumpler, Lula Simmons Thompson, Corinne White, Rebecca White Simmons Chapman, Juanita Cranford Robinson Watson, Ollie B. Smith, Rosetta White, Emma White Reid, Elizabeth White Patterson, and Helen White (to name a few)—these fierce women were organizers and leaders in their churches, unions, and community organizations.  They were survivors of U.S. institutional racism, sexism, and classism, which prevented them from receiving the full formal education they each strongly desired and deserved.  And yet, in spite of this egregious reality in their lives, my maternal and paternal (great-great-great) grandmothers and aunts not only persevered in spite of the odds stacked against them because of their race and their gender, some of them made herstory in their communities. To paraphrase Dr. Maya Angelou, “they still rose” through their never-ending fight and struggle against racism, sexism, and classism throughout their lives. These race women carried themselves with non-negotiable dignity and they demanded respect, most especially from the White supremacist establishment.

Gwendolyn Zoharah Simmons, Ph.D., my mother, was the first self-defined feminist that I ever knew. I firmly believe that my (great-great-great) grandmothers and aunts were Black feminists/womanists, even though they would never have used those terms to describe themselves.  I feel extremely fortunate that I grew up in two households (my mother’s and my father’s) where the words “Black” and “feminist” were never viewed as contradictory.  This understanding is a very important gift that I inherited from both my mother and my father at a young age. It shaped how I view the world today. 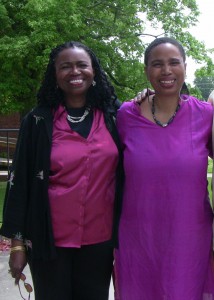 For many years, my mother and I have had our “mother/daughter” challenges. We consistently work, struggle, and love through dialogue and in the profundity of silence to fully understand who we each are and respect the places from which we each stand on our journeys called life.

I’m very clear that I am literally standing upon ground that she broke in the 1960s when she was on the frontlines fighting for racial justice in Amer-i-KKK-a. In 1964, a couple of months shy of her twentieth birthday, my mother became the Director of a Council Of Federated Organizations[1] project in Laurel, Mississippi.  To the best of my mother’s knowledge, she was one of only two women project directors during this Mississippi Freedom Summer of 1964. She remained Project Director for eighteen months. In response to a violent intra-racial sexual assault attempt, while fighting against some of the most vicious forms of racism with her Black male comrades, she instituted one of the first (if not the only) sexual harassment policies in 1964, on the Laurel Project.

In my feature length film NO! The Rape Documentary, which unveils the reality of rape, other forms of sexual assault, and healing in African-American communities, she says:

“…I made it a point on the Laurel Project to say ‘NO sexual abuse of any kind would be tolerated. And any infringement of that would be grounds for being expelled from the project.’ To my knowledge it was the first project and possibly the only one, certainly during the Mississippi Summer of 1964 that any project had such a rule. Everyone had to go through an orientation that included a segment on sexual abuse and what it was and that when a woman said she didn’t want to go out or certainly didn’t want to have sex that no one better ever try to force her to do that. As a result of that I became known as an Amazon…”

She eloquently writes about her transformative experiences coming of age as an activist in From Little Memphis Girl to Mississippi Amazon, which is the opening chapter of the award-winning anthology, Hands on the Freedom Plow: Personal Accounts by Women in SNCC.

My mom is the womanifestation of the continuum of the powerful women who preceded and raised her. I celebrate her and all their Black feminist/womanist activism which has most definitely informed and inspired my Black feminist lesbian activism.

[1] Council of Federated Organizations was made up of four organizations working to achieve racial equality in the United States.  The organizations were SNCC (Student Non-Violent Coordinating Committee), SCLC (Southern Christian Leadership Conference), CORE (Congress on Racial Equality), and NAACP (National Association for the Advancement of Colored People).