Love in the Time of Amendment One: From Arizona to North Carolina – The Feminist Wire

Home / Culture / Love in the Time of Amendment One: From Arizona to North Carolina

Love in the Time of Amendment One: From Arizona to North Carolina

By Mason Casper-Milam, with a response from Heather Laine Talley

LGBT stands for lesbian, gay, bisexual, and transgender. But this article is just on the LG part. In North Carolina, people have voted against LGBT. Statewide, people who are LGBT are not allowed to marry. The rule now is that men can only marry women and vice versa.

I am a strong believer that this is wrong. Put yourselves in their shoes. If you were LGBT, how would you like this rule? I, for one, know I don’t. People who are LGBT are struggling through every minute of their lives.

The gay/lesbian marriage rule is something to protest, in my opinion. Me, you, and everybody else should be against this marriage rule. 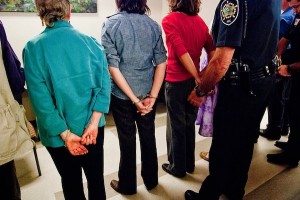 The WE DO action, May 11, 2012, Asheville, NC (Photo credit: Campaign for Southern Equality)

I have written a letter to one of my friends who lives in North Carolina:

I am sorry about this new rule, that in North Carolina only men can marry women and vice versa. I hope it is not too hard on you. Can I ask you a few questions? How do you feel about this rule? Does this change your life?  Please write soon.

And she wrote back:

Thank you for writing about Amendment One. You ask me how I feel about this law. I feel a lot of things. One word is heartbroken. On Tuesday night, Lee and I sat with friends to watch the results come in. I am aware that different North Carolinians had radically different experiences of this primary election, specifically this vote.

Some, including the 61% of voters who supported the Constitutional Amendment, surely experienced its passage as a success. Others lamented the moment, but perhaps could not understand in their bones what this change in the law feels like to those whom it will most directly affect. I am stunned at how many folks seem not to have noticed that this happened at all.

But for others of us and for everyone who sat in our living room, the tiny numbers that filled the bottom of our television screens were deeply significant. Those numbers made us wonder which of our family members voted against us and which of our friends did not truly see “our” fight as “their” fight and so had not bothered to vote at all. Those numbers reminded us of the painful conversations with lifelong friends and family members who admitted that at a fundamental level they see our lives as less valuable and not worthy of protection, much less celebration. Those numbers made us question what exactly our status is in a state—whose public schools we send our children to, whose taxes we pay, whose citizens we serve as teachers and health care providers and community organizers.

For some North Carolinians, Tuesday night passed, and Wednesday morning came just like any other week. For other North Carolinians, last week was devastating. You mention that the law limits marriage rights to male/female couples. Maybe what you didn’t hear in all the news coverage in Arizona is that marriages between women or between men were already illegal in North Carolina.

Imagine if after you passed the fourth grade with flying colors, you had decided to spend another year doing it all over again. Just because. Essentially, that’s what North Carolina did. They passed a law, which was already on the books. Just because. Here’s the thing though: While certain families were always prohibited from marrying, the Constitutional Amendment was written to strip other rights from families, all kinds of families. Ones with two moms and two dads, one mom or one dad, parents who aren’t married, families of people the ages of most of our grandparents. All of those families are likely to have life made harder because of this decision.

Some North Carolinians felt increasingly unsafe on Wednesday morning. Before the vote, we worried that one side-effect of Amendment One might be increased violence towards LGBTQ people or, even, straight people perceived as LGBTQ. What we do know is that the Amendment definitely opened up a kind of unkindness that may have existed before but until the last few months went largely unspoken. There are many terrible stories of the kinds of things people said to encourage others to vote for Amendment One. What some of us may experience on the other side of its passage is an increased nervousness with neighbors, a new kind of anxiety walking alone, and a real fear about what words might come out of a stranger’s mouth.

To be honest, Mason, I think to be an LGBTQ North Carolinian feels a lot like being a kid who’s chronically bullied on the playground. Have you ever noticed how, when one person is mean, it’s like their actions give other people permission to be hateful? That’s how bullying works. Sometimes, seemingly out of nowhere, the nastiness explodes. All of the sudden it’s not just one kid, but an entire group who jumps into the name-calling and ugliness. I think that’s usually when a fight breaks out. You keep trying to say the right thing, to prove that you’re not so bad. You keep doing favors for the other kids hoping that they’ll see your intrinsic goodness. You try to be vulnerable and explain what their words feel like. You exhaust yourself thinking about ways to try to get out of the situation. You think that if you can just happen upon the right plan that the bullying will stop. It is hard living every day when you wake up bracing yourself in case today’s the day you get hit.

Mason, here’s the thing to remember about bullying though—the playground kind and the legislative variety. The bully will try to convince you that there is something wrong with you that justifies the bullying. The bully will say that you’re ugly or stupid or bad or evil. The bully will tell everyone who will listen that if only you would stop doing the very thing that causes them to hate you, they would stop bullying you.

But I want you to think about this for a minute. That’s like blaming the door when you’re running around too fast and accidentally shut it on your own hand. OUCH! But the door was just hanging there minding its own business, but when your hand is throbbing you want to blame somebody or something, so you get mad at the door even though you’re the one who knocked the door shut. Sometimes, even though it doesn’t make any sense at all, we kick the door.

Blaming the bullied for bullying is essentially the same thing. When things in life aren’t going how we’d like, we blame someone. For example, at school, a bully might think, “If only you weren’t such a good reader, I wouldn’t seem like such a bad reader.” The bullies in North Carolina thought, “If only ‘they’ didn’t demand benefits, we’d have more. If only ‘they’ didn’t exist, our children’s lives would look like we’d daydreamed.” But becoming a better reader doesn’t happen by hating the best reader. And being happy when our children come out as LGBTQ doesn’t happen by hating LGBTQ folks either.

But bullying still hurts our feelings, and we still have to fight hard to not have the messages that bullies tell us affect the ways we see ourselves.

Here’s the magical thing: After all of the bullying that’s happened in North Carolina, I don’t know anyone who stayed home with the covers drawn over their head, even as some of us might have wanted to. Wednesday night found us gathering yet again. We shared food. We hugged each other’s children. We made room for all the feelings. Crying and laughing, we loved each other. Some of us took action, too. Just like the civil disobedience of the Civil Rights Movement, couples across North Carolina requested marriage licenses. Now, we knew we wouldn’t be served, but we asked anyway. We stood in North Carolina governmental buildings and we simply said, “I do not accept this bullying. I know it’s not fair, and I believe that you know it’s not fair. The things that you say about me are simply not true. I will not be convinced that I deserve this bullying.” I can’t wait to tell you more about what it felt like and how special that moment was, but that’s a story for another time. 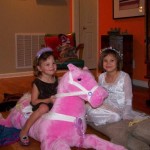 Delaney and Mason, with Pink Pony, in Nashville, TN, circa 2006

Mason, when we lived in Nashville together, we made family. Your sister Laney, you, and I snuggled in the red chair and read piles of books. We scoured the yard for things to glue on construction paper. We trick-or-treated on Halloween. Surely, we shared a hundred meals. During those years, we were together for all of the hard things too—the sad moments and the scary ones. Even though you are in Arizona and I am in North Carolina, you’re still making family with me. By writing me this letter, by having the heart to wonder how this might feel to me, and by taking the time to check in, you so beautifully show what love looks like.

Here’s what I want you to remember: This kind of family, the kind we make with friends, the kind that lives in us, is something that no one, not even the state of North Carolina, can take away from us. In fact, it is precisely this kind of love that expands far beyond the reaches of the family that we were born into that drives the search for equality and justice. Not recognizing one another’s full and precious humanity is what leads to the passage of laws like Amendment One, but it is love that joins folks born into hundreds of thousands of different families to search together for ways to flourish.

There you are in Arizona loving us in North Carolina, and I am sending love to you in return. Doesn’t it feel good to know that we have family loving us from all over? 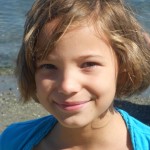 Mason Casper-Milam is ten years old. She enjoys reading, writing, art, and nature. She has a pet fish named Aqua, who she sometimes forgets to feed. She likes to geocache while hiking with her family. This is her second story for TFW; in February, she and her mom wrote an article about The Hunger Games.