Arizona Secretary Of State Threatens To Keep Obama Off Ballot 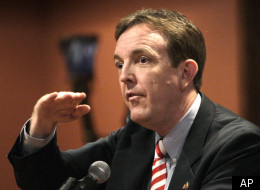 Arizona Secretary of State Ken Bennett made moves to appease birthers in his state this week, petitioning the state of Hawaii to confirm the existence of President Barack Obama’s long-form birth certificate, which the White House released last year.

In a radio interview with KFYI’s Mike Broomhead, Bennett said he would consider keeping the president off the ballot if the state failed to answer his request. Bennett, who is preparing for a gubernatorial run in 2014, also denied being a birther himself, and said that his action was not a move to gain favor with fringe elements in Arizona. He claimed it was a standard response to pressure from over 1,200 Arizonans who had emailed him with concerns about the president’s eligibility and the authenticity of his birth certificate.

“I’m not a birther. I believe the president was born in Hawaii — or at least I hope he was,” Bennett told Broomhead. “But my responsibility as secretary of state is to make sure that the ballots in Arizona are correct and that those people whose names are on the ballot have met the qualifications for the office they are seeking.”

According to Bennett, his request for officials in Hawaii to verify the existence of Obama’s birth certificate has gone unanswered for eight weeks. Bennett said he was surprised by the lack of response, but it is worth mentioning that Hawaii hasn’t expressed the greatest fondness in being the primary recipient of incessant birther demands.

In 2010, before the release of Obama’s long-form birth certificate, the flood of birther activity became so distracting that Gov. Linda Lingle (R) signed a bill allowing state officials to ignore requests for copies of the document.

Bennett even admitted that Hawaiian officials told him they were “tired of all the requests,” but the secretary of state didn’t appear deterred.

Bennett’s move is just the latest birther bustle in Arizona, which has been a hotbed for Obama eligibility conspiracy theories over the past few years. Clamor over a bill meant to address the issue was temporarily silenced last year when Gov. Jan Brewer (R) vetoed the measure, calling it “a bridge too far.”

Related Items
← Previous Story Love in the Time of Amendment One: From Arizona to North Carolina
Next Story → Beyond the Access Narrative: Marriage Politics, Austerity, Surveillance