Women Miss Out on Job Growth – The Feminist Wire

Women Miss Out on Job Growth 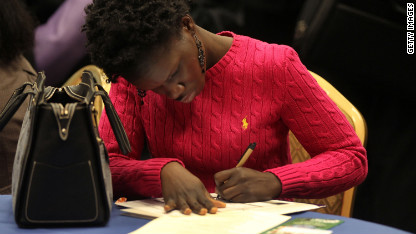 The “mancession” has morphed into the “hecovery,” leaving women workers largely in the dust. The share of adult women who are employed is lower than it was two years ago, while men have seen an upturn. The slow pace of recovery in women’s employment has surprised and concerned some experts, who say it’s unclear whether there will be a rebound anytime soon.

“Even though we are seeing some recovery, we have not seen it in a recovery of jobs for women,” said Heather Boushey, senior economist at the left-leaning Center for American Progress.

Women gained only 12.3% of the more than 2.3 million total jobs added to the economy during the recovery — which include both public and private positions –according to the National Women’s Law Center. It is estimated that women secured only 23.5% of private sector jobs.

Much of the blame lies in the steep loss of government jobs, particularly in local school districts, where women predominate. State and local governments were propped up in 2009 and 2010 by President Obama’s Recovery Act. But the funds largely ran out after that, prompting budgets and payrolls to be slashed.