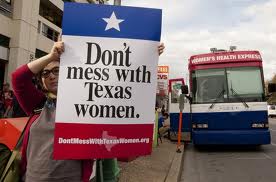 A federal judge on Monday blocked a Texas rule that would have excluded Planned Parenthood from participating in the state’s women’s health program. U.S. District Judge Lee Yeakel ruled Monday more than sufficient evidence to believe the state’s attempt to ban Planned Parenthood is unconstitutional. He imposed a temporary injunction against enforcing the legislation until he can hear full arguments.

The state of Texas passed legislation that would ban state dollars being used to provide any healthcare service to an agency that also performs abortion services. It was set to go into effect on Tuesday. Eight Planned Parenthood clinics that don’t provide abortions sued the state saying the law unconstitutionally restricts their freedom of speech and association.

The federal government requires certain services be provided within states that accept federal funds for healthcare services. When Texas passed legislation to defund Planned Parenthood, the state ultimately violated federal laws and agreements under Medicaid. The federal government responded to this violation by discontinuing healthcare funding to Texas, which resulted in the loss of the other 90 percent of financial support.

The preliminary injunction is a big win for Planned Parenthood, which has been under siege in several states by abortion opponents. In the past year alone, states including Wisconsin, North Carolina, Tennessee and Indiana, in addition to Texas, have all moved to block Planned Parenthood from receiving taxpayer money.

The federal government pays for a whopping 90 percent of the cost of the Texas Women’s Health Program, which serves low-income women of reproductive age who do not qualify for regular Medicaid coverage. Texas puts up just $4 million a year to fund healthcare services like those delivered by Planned Parenthood.

It should be noted that state money cannot be used to fund abortions in Texas, and that has been the law for decades. The efforts of the Texas legislature to defund Planned Parenthood came from critics who say the annual $4 million in state money provides an indirect subsidy to Planned Parenthood, by helping pay utility bills and keep doctors on staff.

Related ItemsCultureFamilyHealthPersonhoodReproductive RightssexismU.S. PoliticsWar On WomenWomen's HealthYouth
← Previous Story On "Liberated Sex" and Other Myths
Next Story → A Girl Named Ally: A Play in One Act