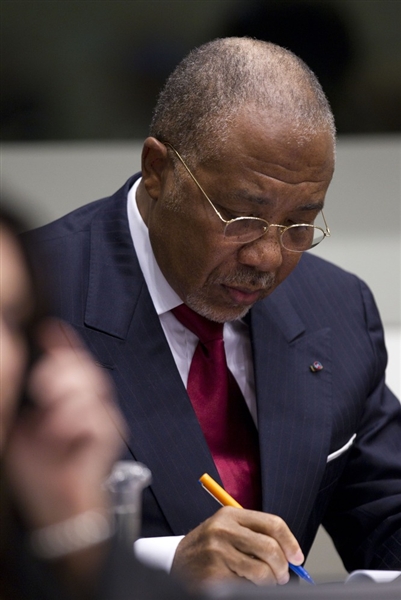 Former Liberian President Charles Taylor takes notes as he waits for the start of Thursday's hearing.

In a historic ruling, a U.N.-backed court on Thursday convicted ex-Liberian President Charles Taylor of war crimes during a conflict that left 50,000 dead.

Taylor, 64, was charged with murder, rape, conscripting child soldiers and sexual slavery during intertwined wars in Liberia and Sierra Leone. However, the tribunal found Taylor guilty of aiding and abetting war crimes and crimes against humanity by supporting notoriously brutal rebels in return for “blood diamonds.”

Taylor is the first head of state convicted by an international court since the post-World War II Nuremberg military tribunal.

Presiding Judge Richard Lussick said the warlord-turned-president provided arms, ammunition, communications equipment and planning to rebels responsible for countless atrocities in the 1991-2002 Sierra Leone civil war. Lussick called the support “sustained and significant.” While judges convicted him of aiding and abetting atrocities by rebels, they cleared him of direct command responsibility, saying he had no direct control over the rebels he supported.

Lussick scheduled a sentencing hearing for May 16 and said sentence would be passed two weeks later.

Taylor stood and showed no emotion as Lussick delivered the guilty verdicts at the Special Court for Sierra Leone. Taylor, who was president of Liberia from 1997 to 2003, was accused of backing and giving orders to Revolutionary United Front (RUF) rebels in the 11-year civil war in neighboring Sierra Leone.

The Associated Press reported that thousands celebrated in Sierra Leone after learning that Taylor had been convicted. Countless survivors of the civil war bear emotional and physical scars from the war. Rebels hacked off the limbs of many of their victims.

Taylor denied all charges, and is expected to appeal, meaning the trial could easily last for another six months.