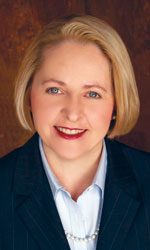 The opportunity came up. I’m in the Emerge program, [which was] started to encourage women to run for democratic office. They approached me when I was running for justice court. A vacancy was created when the former city councilman was appointed to the DA.

I don’t think there is anything specific as a woman. My background is I am a lawyer, I have business management experience. I think men and women are equal. Perhaps a woman’s perspective is something that I offer.

What do you think are some of the biggest systematic obstacles to women running for office?

Cronyism and the fact that women make 76 cents to every man’s dollar. We are not in key positions in business to make contributions to the campaigns of women. If you are not part of the network, you will not have access to the dollar. Maybe if you are the wife of someone powerful you would. Class is also an issue, perhaps. Name recognition and spousal connections help.

I loved it! I loved canvasing in neighborhoods and the discussions of their concerns and the perspectives of the community members. I liked the debates. The activity was exciting. You have to be an extrovert to like this type of work. It was great. I would do it again and would have regretted it if I hadn’t done it. I absolutely will try again. There are no overnight successes. There are things that I have failed at academically and opportunities I have missed professionally, perseverance and experience help one go where they are going.

I knew it was a long shot, but one of the local writers tried to make it an identity issue: the mayor did not sign the marital equality letter law, the media writer found out I was gay, and she just asked for my comment on the issue of the mayor not signing the letter. I responded that I felt we missed an opportunity to appeal to attract a broader base of tourists. It is an economic issue as tourism is important in Las Vegas. Since I did not respond to the question in the way that he expected and wanted me to, after that the writer didn’t take my candidacy seriously when I didn’t play ball. After that, they made it a two-man race. We as women face the control of the media. If the people had seen it was a three-person race, I would have garnered more votes. It is all in perception and the media plays a big role. The media was frustrating. The guy did not try to develop who I was as a candidate, but rather just to call out the mayor on the letter.

How do you incorporate issues of race, sexuality, and other “identity politics” into your campaign?

In your message. To working men and women, right now the economy is in the tank so the most important thing is jobs. I put myself through college and law school, so I have a first-hand knowledge of understanding what it means to not be handed something. Race, as a public defender, there is definitely issues of race in law. It depends on the constituents. Where I live, most of my constituents are elderly white people. They are not as concerned about homelessness, etc. If you are going for governor or state representative, it would be more of a concern for your campaign. People with substance issues, veterans returning from Iraq who are facing issues of acclimating – they resort to drug/alcohol abuse, losing their job, stealing money to survive, etc. One must look at the whole person. Try to connect the person to services they need while on probation- counseling, etc. to help them get back on their feet.

We are getting apathetic – you don’t know what to believe. If the message is false, it is hard to correct the message. We are getting bombarded. Lack of education and lack of interest in our leaders is prevalent. People compromise their ethics and principles.  Someone like Santorum—who pulls out a zealous Religious Right agenda, which inflames a certain group of people and diverts them from the important issues—is not helpful. They are a smokescreen for the real problems.

Economy, abuse of power by corporations who utilize tax loopholes, the exportation of service jobs that could otherwise be cultivated here, health care, and education.

Don’t do it! (laughs) Don’t give up. Don’t compromise who you are. Continue to fight for what you believe in. Speak up for those who otherwise cannot speak for themselves. Do the right thing.

What are your political inspirations?

To continue to serve the community and make a difference. Work can be done even if you are not elected to office. In the public defenders office, I worked to get the county to recognize domestic partnership benefits and I was successful at that. You can make a difference behind the scenes.