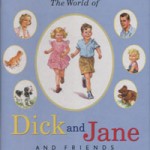 Black children in America are never innocent.  Innocence looks like Dick and Jane, our bright-eyed tour guides through the idyll of green lawns, lazy bike rides down hopscotched sidewalks, and the mystery meat treasure of sandboxes under blue skies that sparkle into eternity.  From the 1930s into the 1960s Dick and Jane taught America how to read the American dream.  Picture book primers with these two characters snaked through every schoolhouse from the Deep South to the rugged West of African American “Promised Land” reveries. Before the mainstreaming of phonics, the Dick and Jane primers were the first to provide sight reading instruction supposedly grounded in average everyday life.  In their sun-kissed freckle-faced average-ness, Dick and Jane schooled America in the cultural literacy of suburbia and the holy trinity of nuclear family, heterosexual marriage, and whiteness.  Neat, well-dressed, ever-courteous, they established the template for a “normal” childhood of perfect single family homes in segregated subdivisions that would be tethered to the world’s largest interstate highway system in 1955.  Father was breadwinning and boozing. Mother was homemaking and Easy-Off sniffing.  Spot the family dog brooded faithfully at brother Dick’s side, primed to rip off the balls of any intruder.  Government subsidized Federal Housing Administration (FHA) loans and GI Bill funded college educations smoothed the pathway for Dick and Jane’s nuclear bootstrapping.  Black vets and black families needn’t apply.

In her World War II era novel The Bluest Eye Toni Morrison begins almost every chapter with a bitter homage to the manufacturing of Dick and Jane. The book opens with “Here is the house.  It is green and white.  It has a red door.  It is very pretty. Here is the family.  Mother, Father, Dick, and Jane.”  On the next page the words blur together, spidery and damp, underscoring the brutal contrast between idyllic Americana and the novel’s blistering story of incest, racial apartheid, misogyny, and psychic degradation in the life of a black Midwestern family.

As metaphors for American innocence Dick and Jane continue to taunt and terrorize.  These are the bodies that matter, that are worthy of protection, that demand the kind of national security epitomized by America’s panting 24/7 tabloid obsession with all the missing Caylees, Jaycees, Chandras, Elizabeths, and Natalees.  This is the legacy of human value and worth that so-called “white Hispanic” neighborhood watch “captain” George Zimmerman, like scores of American children of all ethnicities, was steeped in when he murdered Trayvon Martin in cold blood. It is the code that gives law enforcement license to criminalize the lives of blacks while harboring white killers.  Some residents of the Sanford gated community where Martin was killed allege that Zimmerman targeted black men.  Early on, his white father sought to deflect charges of racism by trotting out his Latino heritage.  Yet reference to his “biracial” status hardly neutralizes claims that he subscribed to racist beliefs about black people.  In the U.S., Latino racial identification has always been fluid, whereas the categorization of blacks has historically been bound by the “one drop rule”, or the rule of hypodescent.  Reviewing the results of the 2010 Census the online publication Latino Decisions noted that, “the Latino population is responsible for much (74%) of (a) 6.5% increase in white population. This poses an interesting dilemma: Latino population growth is driving the national movement toward majority-minority status, but the rise in white identifying Latinos is also responsible for a renewed growth of the U.S. white population.” Indeed, the Pew Hispanic Center’s 2004 report also noted that nearly half of Latinos identified as white on the 2000 census.  So when the news of the shooting first broke, Zimmerman was variously identified as white, white Hispanic (by law enforcement) and Spanish-speaking.  In the eyes of the Orlando police, Zimmerman was able to occupy whiteness in a way that would never be afforded a biracial person with identifiable African heritage.  This kind of ambiguity—or what feminist activist Diane Arellano has called “lesser white status”—is part of what legitimized Zimmerman’s self-defense claim.

In his role as neighborhood watch captain, Zimmerman was upholding the time-honored tradition of white homeowners’ associations that protected white communities from dark interlopers.  During the era of restrictive covenants, pioneering 1940s subdivisions like Long Island’s Levittown New York ensured that black homebuyers were excluded through discriminatory clauses buttressed by the FHA, real estate brokers, private lenders, and banks.  In Los Angeles, black homebuyers who overstepped these boundaries were targeted, profiled, and often run out of their new homes by the local blockbusting “welcome wagon.”  These exclusionary white affirmative action policies solidified white middle class upward mobility. And their legacy can be felt in 21st century America as residential segregation continues to trump income.  According to Brown University’s 2011 “Separate and Unequal” report, “affluent blacks have only marginally higher contact with whites than poor blacks” and the overwhelming majority of all whites still live in white communities (regardless of class background).  Then as now, national security meant protecting white homes and white property values.  Open carry and stand your ground laws merely reinforce this regime by giving white citizens carte blanche to police the “dangerous” racial other.  Fifty-seven years after Emmett Till was lynched in the name of white womanhood, the murder of Trayvon Martin—a beautiful son, friend, and prospective college student—is yet another testament to the terror of white picket fence innocence.

Related ItemsCulturePoliticsU.S.Youth
← Previous Story Pimps Tattoo Women with Barcodes in Spain
Next Story → Too Short and the Feminists