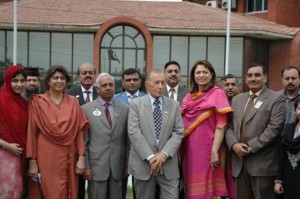 Pakistan’s Senate passed a bill that makes violence against women and children an offense carrying jail terms and fines, state media said. The Domestic Violence (Prevention and Protection) Bill was introduced by Senator Nilofar Bakhtiar (pictured right in pink) and passed unanimously by the upper house of the federal parliament, Pakistan Television reported.

Under the law, those found guilty of beating women or children will face a minimum six months behind bars and a fine of at least 100,000 rupees ($1,100). The bill also provides protection to the adopted, employed and domestic associates in a household. The law classifies domestic violence as acts of physical, sexual or mental assault, force, criminal intimidation, harassment, hurt, confinement and deprivation of economic or financial resources.  Previously, if a man beat his wife or children, police could not arrest him as it was considered a domestic affair.

Related ItemsPoliticsWorld
← Previous Story Get There: Four Electric Ghosts
Next Story → The Occupation Stole My Words, June Jordan Helped me to Relocate Them