Face-Recognizing Billboard Shows Ad to Women Only – The Feminist Wire 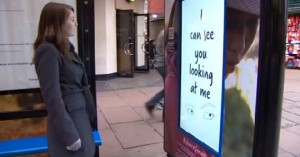 Plan UK, a non-profit organization that helps children in third-world countries, recently created a billboard to promote the group’s “Because I’m a Girl” campaign.  The kicker is, it only allows women to view the ad. Located in London’s West End, the ad is equipped with a high-definition camera that is used to scan passers-by’s facial features, determining their gender with a 90% success rate. The display, which cost an estimated £30,000 ($47,000), will run for two weeks to raise £250,000 ($391,700) via donations over the next four months.

The effort is designed to help sponsor girls in developing countries receive a proper education. Men won’t be able to see the full ad, and will be directed to the organization’s website instead–to show men “a glimpse of what it’s like to have basic choices taken away.” The fairer sex, on the other hand, will see a full 40-second video promoting Plan UK’s cause.

Related ItemsHealthPoliticsWorld
← Previous Story Of Ambivalence: The Help, Obama, and the Ultimate Slave Re-Mix
Next Story → From One White Gay Male to Another: Calling out the Implicit Racism in Dan Savage's ‘Liberal’ Politics & the ‘It gets better’ Campaign"