By Guest Contributor on February 2, 2012

I am writing this response to a YouTube video circulating widely on the internet in which Eddie Long, the troubled pastor of New Birth Missionary Baptist Church in Atlanta, GA is apparently crowned king with the ritual use of a Jewish Torah scroll. (The reader may know him for the recent scandal in which he was accused by five young men of sexual misconduct. After initially denying the allegations, he went into settlement talks with them.) A number of specious claims are made during the ritual which I would like to refute.

In the video we have Ralph Messer who represents himself as a Jew. He may well be some sort of Messianic Jew, a person who claims Jewish heritage and recognizes Jesus as the Son of God, but who is not part of one of the major Jewish movements: Orthodox, Reform, Conservative, Reconstructionist, Reform, Renewal. He does not, however, represent recognizable Jewish thought or practice in his (mis)representations of the Torah and other Jewish sancta – or for that matter, New Testament and Christian biblical interpretation and theology.

It is unfortunate that the speaker chose to plunder the sacred traditions of Judaism as he invented novel interpretations of biblical texts and imagery to affirm and elevate an individual who had admittedly broken the sacred trust between pastor and congregant. 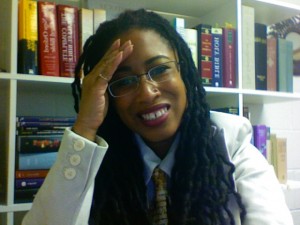 Wil Gafney, Ph.D. is Associate Professor of Hebrew and Old Testament at the Lutheran Theological Seminary at Philadelphia in Pennsylvania and is an Episcopal Priest canonically resident in the Diocese of Pennsylvania. She is also a member of the Dorshei Derekh Reconstructionist Minyan of the Germantown Jewish Center in Philadelphia PA. In addition she has co-taught courses with and for the Reconstructionist Rabbinical Seminary in Wyncote, PA.  For more visit Amazon.com and Living in Jerusalem: 40 Days and 40 Nights.