“Oh Hello No”: Homophobia and those t-shirts ain’t no joke – The Feminist Wire

Home / Politics / “Oh Hello No”: Homophobia and those t-shirts ain’t no joke

“Oh Hello No”: Homophobia and those t-shirts ain’t no joke 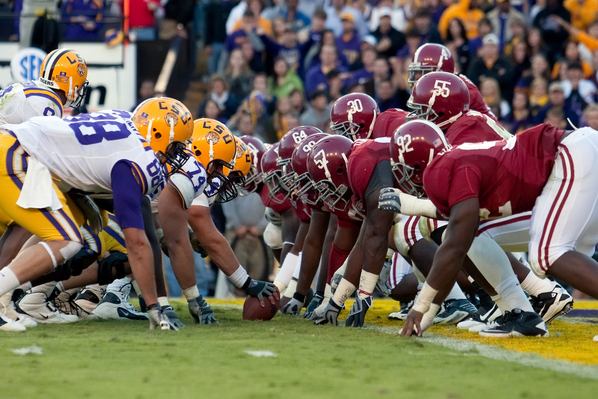 The college football season came to an end last night.  It marked the conclusion of a bowl season that has been longer than Newt Gingrich, Ricky Perry and Herman Cain’s reign atop the GOP presidential field combined.  Yet, my interest in writing about the game has little to do with the billions of dollars generated for the 1% of college sports, but rather a recent reminder of the rampant homophobia in today’s society.

In an effort to rally Alabama fans and of course make money, an Alabama fan and small business owner (you know, the “job creators”), designed a score t-shirt, which was to memorialize the Crimson Tide’s victory over LSU.  Yet, this wasn’t an ordinary t-shirt, but one seeped in homophobia and violence.  It read as follows: “HEY HOMEAUXS – WE JUST BEAT THE HELL OUT OF YOU.”

The effort to demonize LSU through “Hey homeauxs” (playing on the French Creole influence in Louisiana) is quite evident.  In deploying the rhetoric of “that’s so gay” the t-shirt depicts the LSU Tigers and its fans as inferior, weak, and undesirable by imagining them as homosexuals.   Its use here is indicative of the hegemony of anti-LGBTQ harassment and a culture of demonization.  “The harassment reported … can be as subtle and pervasive as a phrase like, ‘That’s so gay.’ … The slur is easy and ubiquitous. It’s heard virtually everywhere that young people assemble. In high schools, it’s pervasive … It denotes anything that’s boring, or unwanted, stupid, or unstylish—anything considered uncool …Young kids pick it up, often unaware of its broader connotations,” writes Maya Leveritt in “Kids in the Crossfire.”  “Acceptance of the phrase dulls sensitivities. . . . Calling something ‘gay’ is a way for the callers to distance themselves from it. It echoes and reinforces the way that gays have historically been shunned … whether it’s meant to hurt or not, gay kids say it does. Yet students—gay and straight—say they hear the phrase every day” (quoted here).

Secondly, the deployed language of physical violence (alongside of its rhetorical violence) should give everyone pause.  It isn’t simply that the t-shirt imagines and celebrates a group of presumed heterosexuals “beating the hell” of homosexuals, but also the efforts to sell them with the hopes of “thousands of Alabama Crimson Tide fans to flood Bourbon Street, home to some of the oldest gay watering holes in the country” further illustrates several real-life issues at work.  The efforts to intimidate, to reenact violence, toward a maintenance of segregation and power, is revealing.   The normalization of violence against LBGTQ communities has profound consequences.

According to a recent report from the National Coalition of Anti-Violence Programs (NCAVP), violence against LGBTQ continues to be a major problem in the United States.  In its report, Hate Violence Against Lesbian, Gay, Bisexual, Transgender, Queer and HIV-Affected Communities in the United States in 2010, the NCAVP documented:

27 anti-LGBTQ murders, the second highest yearly total ever recorded by the coalition. This is a 23% increase from the 22 people murdered in 2009.

Transgender women made up 44% of the 27 reported hate murders in 2010, while representing only 11% of total survivors and victims. As well, transgender people were more likely to have injuries as a result of attacks and less likely to receive medical care.

T-Shirts such as this normalize homophobia all while reconstructing anti-LGBTQ as a joke.

The news of these shirts flooded social networking sites.  While outrage and disgust was certainly the predominant reaction, not surprisingly some have diminished the issue.  Some have dismissed the accusation of homophobia, while others have pointed out that because the University of Alabama did not sanction or produce the shirt (and did condemn it), it is not a major deal.  That is, because it is connected to a single individual(s) rather than a larger institution, it is not worthy of outrage and protest.  And finally, in recent days, some of have celebrated the shirts producer for taking the website down, for deciding not to produce the shirts, and for apologizing for his actions.  He wrote the following in response:

I came across your website about the shirts. I must admit that I did not think of the fact that these shirts could offend homosexuals. Rather, they were aimed towards LSU fans as a joke leading up to the big game. Seeing now the reaction has opened my eyes to the hurtful nature that this shirt presents towards certain people, and because of this I have taken the site down. I have members of my family who are gay, and in no way do I view homosexual in a negative light as someone’s personal opinion is their own. This was a misguided joke and the site will cease to exist.

I now see the negativity these shirts produced towards homosexuals, and not a joke towards LSU fans. My sincere apologies are to anyone who was offended.

His comments are very instructive.  (1) The fact that he was unable to see that demonizing LSU and its fans by calling them gay reflects a culture where LGBTQ individuals are imagined as undesirable and inferior is an embodiment of heterosexual privilege.  Both the language used and the inability to see the inherent violence reflects the normalization of homophobia and heterosexual privilege.  (2) The defense of “it’s just a joke” is about as clichéd and troublesome as “some of my best friends are black.” In their examination of white student attitudes and behaviors in both the “backstage and frontstage,” Leslie Houts Picca and Joe Feagin (2007) argue that jokes matter:

Under the guise of “just kidding,” comments can be tossed around socially without concern for consequences: “It just a joke.  Don’t take me seriously.  However, even in an apparently light-hearted, joking context, racialized “fun” by whites usually reveals hostile and deliberately hurtful sentiments that are typically part of the larger white-racist framing of society.  Not surprisingly, thus, one analysis of survey data found that racial remarks that white respondents defended as “just a joke” were often seen as racist by black respondents.  By telling racist jokes, and insisting that they are only jokes, whites who tell them promote the acceptability, persistence, and armful impact in U.S. society.  Racist joking only accents aspects of white racist framing of society, but also is part of a widespread, often ceremonial activity that reinforces that white framing from one generation to the next and from one group to the next (pp. 69-70).

According to M.M. Manring (1998), “a joke is just a joke, except in the respect that it reveals a common cultural knowledge…A good joke, by its very nature, collapses if it requires any explanation to the humorless” (pp. 2-3).  Jokes “reinforce dominant ideas” (King, 2006) and ultimately flourish “because post-Civil Rights racial norms disallow the open expression of racial views,” resulting in the development of “a concealed way of voicing them” (Bonilla-Silva, 2003, p. 57).   This is true for sexism, xenophobia, and homophobia as well.  Beyond not being funny, joke or not, the t-shirt “reinforces dominant ideas” regarding sexuality, thus normalizing anti-gay ideologies and the belief that calling someone gay is an insult.

Within a climate of anti-LGBTQ violence, within a culture of political demonization of these communities, and within a culture that ubiquitously mocks, demonizes, and devalues LGBTQ communities, these t-shirts, irrespective of their intent, point to the larger issues of homophobia and heterosexism.  While some will see this as a teachable moment, the question will remain who is listening to the lessons.  Are we going to list the lessons of these t-shirts, or the PSA that was aired during a Michigan football game this year?  In the PSA, a group of students are playing flag football.  While in the huddle, one player announces, “let’s beat those queers.” Rather than accepting this violent rhetoric, his teammates stared in disgust, with one announcing “oh hell no.”  To send a message about the unacceptability of these t-shirts and the sentiments that embody them, lets spend today not talking about wins/loses or even the BCS, but homophobia. Lets not send clips from the game, but share this PSA and say “hell no” to all anti-LGBTQ violence in our society.