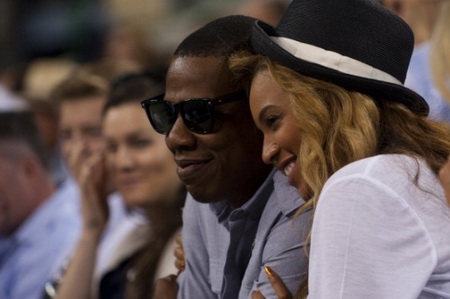 I was prepared to be scared for HOW hip-hop mogul Jay-Z and pop Diva Beyoncé would introduce their daughter, Blue Ivy, to the world. I feared she would be introduced like a long-awaited “product,” or simply the heir-apparent to the “King of Hip-Hop” or the “Queen of Pop.” But my fear was subsided when listening to Jay Z’s new release, “Glory,” a song that beams of great pride—the kind absent of braggadocio and most informed by his genuine bliss and love. Just the tone of his voice marks a feeling of being present; in ways I am sure the plane-hopping, traveling mogul and mate Beyoncé often cannot experience. This song, “Glory,” is more than a rap song, but an homage—the deepest expression of thanksgiving for a child who has transformed Bey and Hova’s world.

While I am excited for Black America’s most-watched couple—next to President and First Lady Obama or Jada and Will— the birth of Blue is not what made me sentimental, or even teary. As I listened to this song, produced by Pharrell, but assumedly written by Hova himself, I envisaged a potential turn in Hip-Hop. This turn, I imagined, was the one similar to the shifts many black men make when they become fathers of daughters—aware of the oppressive forces that their girls face. This awareness begins with just a recognition of the gaze—how our daughters become subjects of men’s fantasies. After this, our consciousness is raised even more once our daughters become more aware of their own bodies and begin to accentuate areas that we fear will call forth more gazes and more problems, for us as fathers. While often this leads to an over-policing of our daughters’ expression of gender and sexuality, it also conjures a care for their welfare, a demand for their respect, and recognition that the world they enter is nothing fair. Most importantly, in these moments we realize that this unfair world is one where many of us—fathers, brothers, uncles, and lovers—participate and even celebrate.

What I hear haunting the tune of “Glory” is the beginning of Jay Z’s recognition that the wreaked “havoc on the world”—through sexism and destructive gender-speak—may need to come crashing to a halt. Knowing that he has such rhetorical power and popularity within the masses, this song may call forth a trend to move from exploitation of women and women’s sexuality to a more mediated location, where women’s sexual autonomy is privileged and their presence is not simply peripheral. Here, like Blue in “Glory,” women are understood as “children of destiny”—not just as a by-product of some groundbreaking girl group, but a creation with a purpose.

Maybe Hova’s homage marks the advent of music that “paints the sky blue” and removes the “black and blue eyes” that are products of a masculinity that forgets the beauty of God’s creation.  Just maybe “Glory” will  call attention to not only the beauty of father-daughter love, but also the recognition that beyond the womb, young women are still to be celebrated, adored, and valued. As Hova continues on the track, he raps, “false alarms and false starts, and “Last time the miscarriage was so tragic, we was afraid you disappeared but nah baby, you magic.” Here, he reveals that Beyoncé had experienced a miscarriage and that Blue Ivy’s arrival was a miracle of sorts—a divine creation. The significance of this miscarriage—in the context of Hip-Hop—reminds us of the fragility of women’s lives and how every woman’s survival is a miracle. Indeed, we live in a world that has miscarried and mistreated women—allowing them to be abused, misrepresented, and killed in body and spirit, often at the hands of men. In this way, Hova’s sharing of the secret, unveils a conversation not simply about the risks of pregnancy for Beyoncé and many women who have poor healthcare, but also the loss of women’s lives as a concern for us all. Here, Jay-Z as father MC, blasts to the world through song that Ivy was a WANTED baby, whose presence has meaning that is connected to both his and Beyoncé’s lives. The tragic circumstance of loss is a joint experience; which propels Blue Ivy’s birth as necessary to be shared with the world. And it is also this energy—shared between these seemingly star-crossed lovers—that drives this musical joint forward.

At the end of the track, we hear what can be assumed to be Blue Ivy’s voice. Jay-Z grants his daughter’s voice as the climax of the track—noting her importance in his world, while also allowing her to speak her importance. This voice says I am more than just a product of my parents: I am my own presence, I am my own glory. It is here where tears come crashing down. Tears arise not simply because it reminds me of the many times I have sat in delivery rooms and heard the sound of baby crackling or cries, not simply because it conjures a yearning to create my own Blue, but because of the centrality of this young baby girl’s voice—as the sounding board for a glorious tune, adorned with radical love and appreciation.

I am not naïve enough to believe that the wake of baby Ivy will bring forth such change.  Neither do I deny that we have heard in many hip-hop artists remnants of the same sentiment expressed in Jay-Z’s “Glory.” But, just the imagining of such a shift where fatherhood—or even brotherhood—draws men away from profiting and preying on women’s bodies is a radical thought. And if only one man, on the verge of defiling a woman or a young girl is moved to and by  “Glory” in this invitation through a hip-hop song, our tears of hope are not in vain.

Jeffrey Q. McCune, Jr. is an Assistant Professor of American Studies and Women’s Studies at the University of Maryland-College Park. He is author of the book manuscript, Sexual Discretion: Black Masculinity and Politics of Passing (University of Chicago Press, forthcoming). He is a contributor to New Black Man, as well as a public speaker on masculinity, popular culture, and black sexual politics.