By Guest Contributor on November 8, 2011 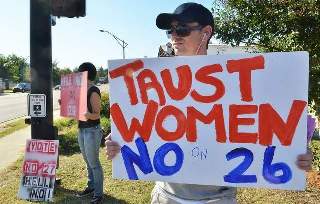 “Alabama’s got me so upset, Tennessee made me lose my rest, and everybody knows about Mississsippi Goddam…”

Little did anyone assume Nina Simone’s infamous lyrics would be reverberating in the groans of women residing in Mississippi 47 years later. Nina Simone wrote “Mississippi Goddamn” as a response to racial violence that murdered Medgar Evers in the state and led to the bombing of a church in Birmingham, Alabama. Today, Simone’s lyrics continue to resonate, as violence against woman’s reproductive health and choice rages on in Mississippi with Initiative 26, the “Personhood Amendment.”  Mississippi, goddamn.

On Tuesday, November 8, 2011, residents of Mississippi will vote on the so-called “Personhood Amendment.”  Mississippi voters will head to their local polling locations and participate in the general election ballot to vote on Initiative 26, which is an indirect initiative constitutional amendment. This amendment will change the legal language of the Mississippi Constitution, Article III, by redefining ‘person’ or ‘persons’ to include “every human being from the moment of fertilization, cloning or the functional equivalent thereof.” PersonhoodUSA is the main force driving the “Personhood Amendment” in Mississippi.

Personhood USA is based in Colorado, but focuses its efforts in states they feel will be more receptive to the Initiative. Having already failed to pass the same amendments in Colorado in 2008 and 2010, Personhood USA simply shifted its voracity for conservative change to other states, including Alabama, Mississippi, and Iowa. So-called “personhood” amendments, such as Initiative 26 in Mississippi, are not simply anti-abortion bills as their supporters claim when they offer evidence of their conservative cred. Rather, these initiatives are assaults on women, with unforeseen consequences for reproductive health.

The Mississippi amendment would not only make abortions illegal in any circumstance, including rape and incest, it would also make birth control in a variety of forms illegal and would ensure that women’s reproductive health services become extremely limited and potentially dangerous. An example of this potential for harm is ectopic pregnancy. In ectopic pregnancy, the embryo attaches to the fallopian tubes as opposed to the uterus. In the case of ectopic pregnancies, the embryo will not develop into a fetus and if the embryo is not removed the result may be death for the mother. Should Initiative 26 pass, a physician in Mississippi overseeing a woman’s care would not be able to perform the necessary medical procedures to safeguard her health and survival. Fertilized embryos would be granted full legal personhood under Initiative 26, and thus removal of the embryo by a physician attempting to treat ectopic pregnancy could result in legal action against the physician for homicide.

With the passing of Initiative 26, contraceptives such as IUDs, which prevent the fertilized egg from attaching to the uterine wall, would also become illegal. Emergency contraceptives such as Plan B would join the list of illegal substances, sure to be quickly followed by the Pill. Hormonal contraception, in addition to preventing ovulation, thins the lining of the uterus making it nearly impossible for a fertilized egg to attach and thrive. This is precisely what makes the Pill effective. Yet it also renders the Pill a questionable substance with regard to the rights of a ‘person’ under Initiative 26. Further, the amendment would require legal investigation of every miscarriage case, should women be “at fault” for “killing” their unborn embryos. The psychological trauma associated with an investigation immediately following a miscarriage would, of course, be immeasurable. As if all of this government intrusion by the movement that claims to be anti-government were not violent enough, Initiative 26 could also make in vitro fertilization and stem cell research illegal.

It is obvious that the amendment is far overshooting the dubious goal of making abortion illegal and is instituting massive constitutional changes that, in the service of embryonic personhood, degrade women’s own personhood. These initiatives will diminish a woman’s right to reproductive health and leave many reproductive and sexual health issues unaddressed. Initiative 26 has been heavily criticized for its ambiguous and vague language that may attract an even wider breadth of unanticipated consequences, with the potential to snowball into an avalanche of lawsuits. If, for example, the amendment passes, could a woman be prosecuted for child abuse or neglect if she does not take her prenatal vitamins or continues to smoke during her pregnancy? Can the fertilized egg be claimed as a dependent on one’s taxes? How will this effect property and inheritance laws? Can an orphaned embryo own a house or be left holding the bag after a foreclosure (rates are high in Mississippi)?

Given the sweeping changes proposed, it is shocking that Initiative 26 has made it this far in the democratic process. Especially when we consider that Mississippi has the highest teen pregnancy rate in the nation, one of the highest STD rates in the nation, including the highestrateofGonorhea in the nation, and an infant mortality rate of 10.0 per 1000 according to the Mississippi Department of Health. These statistics paint an already abysmal picture of reproductive and sexual health in the state. The notion of further limiting access to reproductive and sexual health services seems positively absurd in juxtaposition to these statistics. Between abstinence-only sex education and amendments such as Initiative 26, Mississippi is making a strong statement about the fear of women’s sexuality and the right to sexual expression and reproductive choice. Amending the Mississippi Constitution to define person(s) at the moment of fertilization makes legal strides to reinforce patriarchal paternalism, which subjugates women and repudiates women’s full rights to healthy, self-determined and empowered sexual health.

Bottom line:  Mississippi just doesn’t seem to like girls and women very much.

The rhetoric used by supporters of Initiative 26 argues that this Initiative will make abortion illegal and reinforces the idea that all people are made in the image and likeness of God. Imbued with religious overtones, the supporters of the amendment argue that, at its core, Initiative 26 is about “loving your neighbor” even if that ‘neighbor’ is unborn (never mind that the neighbor lives inside the windowless ‘house’ of women’s actual bodies). It is not, they claim, about limiting women’s rights but rather about supporting human rights for all, even for fetuses.

The official VoteYes 26 website states “If Mississippians vote Yes on Amendment 26 we will be honoring God and loving our neighbors in our law system.” This Amendment, if passed, is far from loving, unless loving means denying women access to gynecological and reproductive health services, rejecting the reality that women are capable of deciding upon their own sexual and reproductive health, and blindly ignoring the subtle violence inherent in the structure of this Amendment. Not to mention that those who are providing medical care will find themselves facing criminal charges for providing such care. Sounds more like an abusive relationship than one based on love.

Initiative 26 intersects not only with women’s reproductive rights, it also directly intersects with socio-economic status and race. If it passes, it is not middle- and upper-class women who will be suffering its consequences. Those women will have the opportunity to cross state borders or make alternative arrangements to secure reproductive health services when needed. Women who do not have the same financial means will not have the same opportunities to escape or circumvent being incarcerated in Mississippi’s repro-hell. Many women will be forced to have unwanted pregnancies, while many others will have few options enabling them to be proactive about pregnancy prevention. The alternatives to unwanted pregnancy, without access to legal and regulated abortion services, are extremely dangerous and likely to result in death, severe infection, or permanent infertility.

The rate of unwanted pregnancies in women whose incomes fall below the poverty line has increased significantly over the past ten years. There was a 50% increase in unwantedpregnancies in women with incomes below the poverty line from 2001 to 2006, a number five times higher than in women with higher incomes. These disparities extend beyond socio-economic class to trap women of color in a sophisticated system of legal and institutionalized stratification and inequality. Initiative 26 would both symbolically and practically imprison minority women and women with lower incomes in a state that degrades their personhood while exalting embryos and fetuses, condones and reinforces systematic hierarchies, and denies reproductive and sexual health services to women whose access is already severely limited.

Unfortunately, Initiative 26 is gaining considerable support. Not only from voters, but among politicians and legislators alike. Both candidates for Mississippi Governor, Phil Bryant (R) and Johnny Dupree (D), have made public statements declaring their support for Initiative 26. The momentum behind this initiative is powerful, in that it has garnered considerable financial support and has become a very visible campaign with divisive rhetoric that very openly states its intent to challenge Roe v. Wade. The reality (one hopes) is that this Amendment, with its ambiguous language, will not hold up in the U.S. Supreme Court and will not bring much of a challenge to Roe v. Wade. It will, however, disrupt and dismantle reproductive and sexual health services while mobilizing conservative discourse that deteriorates women’s personhood.

Though Initiative 26 is a poorly and ambiguously written Amendment to the Mississippi Constitution, it offers a blueprint—one widely supported by conservatives—for the legal and social institutionalization of marginalization, violence, and inequality. Initiative 26 is a blunt offensive against women of color, women with lower incomes, and women’s collective personhood. We often look to political leaders in order to challenge systems of institutionalized violence and inequality. Support for Initiative 26 is just another example of the current socio-political crisis that our nation is facing, when our leaders, rather than protecting and helping us, are the ones firing the weapons. Women continue to suffer chronic, hateful sexual and reproductive violence with continual degradation of their personhood. Initiative 26 beckons for a strong mobilized response, not just from Mississippi voters, but from women across the nation. We need all women to stand proudly in our personhood and to feel empowered in our sexual and reproductive determination.