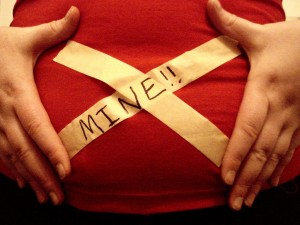 Some disturbingly familiar scenes from the campaign trail…

“Governor, if Kitty Dukakis were raped and murdered, would you favor an irrevocable death penalty for the killer?”
(1988, Bernard Shaw to presidential candidate Michael Dukakis)

“But you’ve had children, grandchildren. If one of your female children, grand children was raped, you would honestly want her to bring up that baby as her own?”
(2011, Piers Morgan to presidential candidate Herman Cain)

And so we have it, in 2011 as in 1988: the hypothetical vulnerable wife/daughter/granddaughter as depicted by her Victorian male interlocutors and protectors. Dukakis’ answer to Shaw’s question (along with the infamous tank ride) sunk the candidate’s campaign, while Cain’s response to Morgan played into what Salon has called Cain’s continuing “abortion problem” (not to be confused with the sexual harassment problem). It would seem the ubiquitous representation of woman-as-vessel is alive and well in American politics. Subject to rape, likely to reproduce, and either way, a predicament for the men in her life.

We are thoroughly annoyed by the discursive use of women in political debates, as the focus of “gotcha questions” and litmus tests, as if rape and abortion are topics to be casually tossed around by talking heads and politicos. Our elected leaders must stop trivializing violence against women to further their own political aims and existential manhood.  Debate moderators rarely ask such questions as, “Sir, if your penis was accidentally or deliberately amputated by your girlfriend, would this change your views about access to health care?” Or, “Senator, if your husband was chronically impotent, would you change your position on public funding for Viagra?” No, it appears to be only women and girls who are trotted out as hypothetical victims, with African-American men often strategically deployed as hypothetical assailants.

Of course, statistically speaking the irony and the tragedy of this election-year wordplay is that somebody’s wife, daughter, or granddaughter has a whopping 25% chance of being raped in her lifetime in the United States. Despite decades of anti-rape and anti-violence movements, women and girls are still unacceptably at-risk for sexual assault and unintended pregnancies. The repeated use of hypothetical women as political fodder, and the persistence of the hyperbolized connection between rape and abortion, requires feminist analysis. It also demands a healthy dose of outrage, not least in part because pregnancies resulting from rape are not as frequent as presidential debates would have us believe.

Consider the following data (unless otherwise noted, data are taken from R.K. Jones and K. Kooistra, “Abortion Incidence and Access to Services in the United States, 2008,” Perspectives on Sexual and Reproductive Health, 2011, 430(1): 41-50):

Clearly, these and other studies show that women and girls become pregnant, quite often, when they don’t want to. While conservatives in the United States have not yet been able to eliminate Roe v. Wade, despite their transparent aims, they have been extraordinarily successful at limiting access to abortion services, not to mention denigrating contraceptive use. Thus, cultural politics of morality intersect with a stark structural reality in the United States: poverty and geography increase some women’s vulnerability to unwanted pregnancies while simultaneously limiting access to abortion. As always, women who have the means and access—women like us (white, educated, insured)—will secure an abortion. And women who do not have the means will either resort to desperate (and often deadly) actions, as in the too-recent past, or they will give birth to an unwanted child. Most likely, this child will be born into poverty and/or to a teen mother.

Young women, especially pre-teens and teenagers, are significantly more at risk of becoming pregnant after an incidence of sexual assault or sexual coercion than are older women. Further, statistics point to the particular vulnerability of young women of color whose lived experiences are often profoundly shaped by violence. Young, poor, and nonwhite: these are precisely the categories of women with the least access to abortion and other health care services. Rape and abortion are not necessarily bound by the events themselves, but rather by the structural aspects of girls’ lives: race, class, gender, and geography impede the ability of young women of color to control their own bodies and to secure safe and healthy futures. These are the faces of reproductive justice, not middle- and upper-class white women. Reproductive justice, from the start, is racialized and classed.

Portraying the ideal(ized) rape victim as a helpless affluent woman, who is perhaps impregnated and must then seek an abortion, whitewashes women’s reality wherein nearly 45 percent of all American women have abortions by the age of 45. This percentage represents not just victims of sexual assault who become pregnant, but women and girls from all walks of life who must often overcome tremendous obstacles in order to enact their increasingly tenuous “right” to choose. We would bet good money that it is not only Democrats and atheists who obtain abortions; indeed, about 70 percent of abortions are performed on women who identify as Christian, with 18 percent of these women identifying specifically as Evangelical (roughly 25 to 45 percent of Americans identify as Evangelical).

So what of the “other” women and girls who, faced with insurmountable structural violence, may be consigned to raising an unplanned and possibly “unwanted” child in abject poverty at the whim of a society that demands the realization of every ball of cells, but turns its back once a child is born? Consider Mississippi’s “personhood amendment”—a cruel and violent twist on health care governance in a state with one of the nation’s highest rates of poverty, unintended pregnancy, and teenage pregnancy. While real girls and women are harmed, sometimes irreparably, by structural violence and a state coming apart at the seams, precious state resources are spent on cells and slogans.

Here are the facts of “life” and “personhood” as we understand them: women become pregnant when they do not want to. And men are obviously complicit in this, although we rarely hold their feet to the proverbial flames (our cultural lexicon has no space for fallen men). Incontrovertibly, women will obtain an abortion when they need one if they have access. If they do not, they may stay calm and carry on, because women are unbelievably tough, but more likely they will suffer, struggle, and find it difficult if not impossible to thrive. Let’s stop the hypocrisy and violence of “pro-life” politics by recognizing that supporting women and girls throughout their reproductive years is a “pro-lives” ethic.

Although rape is pandemic, pregnancy does not always result from sexual violence. When it does, our nation’s poorest and most vulnerable girls and women bear the harshest consequences. Thus, we must also recognize that what binds rape and abortion is not merely political discourse or Victorian notions of woman-on-pedestal, but also and more profoundly an epidemic of structural violence. This includes the violence in women’s lives at all levels, including ideological violence that positions women solely as victims, and the violence done to women by forced pregnancy. Because let’s be clear: forcing women to bear children they do not want and cannot support is violence, not morality.

Wanda Kolomyjec is a current master’s student at Arizona State University’s Social Justice and Human Rights program. Wanda, an activist, feminist, and educator draws from two decades of work in areas of non-profit and for profit business as well as in the area of public and private education. She hopes to utilize her educational and business background to fight for social justice, in particular, the areas of feminist activism and public education.