The Defiant One: Euzhan Palcy – The Feminist Wire

The Defiant One: Euzhan Palcy

For Joanne and David Burke, with thanks and appreciation.

Marlon Brando, Susan Sarandon, Donald Sutherland, Gérard Depardieu and the controversial American Idol and Grammy winning singer, Fantasia Barrino, need no introduction.  Neither should Euzhan Palcy, the Martinican-born director in whose films these artists are all featured.  The retrospective of Palcy’s work at the Museum of Modern Art (MoMA) from May 18-21—the first Black woman filmmaker to be so honored—will go a long way toward bringing this pioneering artist to the awareness of the American public whose name may not strike a familiar chord, like, say, a Debbie Allen, Julie Dash, Kasi Lemmons, John Singleton or Ousmane Sembène.  But, Palcy has not always enjoyed the recognition that she deserves either in her country, France, where anti-Black discrimination underpins a palpable absence of French Black actors and filmmakers on and behind the silver screen.  While co-organizing in Paris last May a rather unique film festival on the Black presence (or lack thereof) in French Cinema of which Palcy was both our champion and patron, I became more keenly aware of her struggles to practice her craft in an industry in which there are painfully few Black women filmmakers.

And yet, Palcy was also the first Black woman to direct a major Hollywood studio film, Metro-Goldman-Mayer’s A Dry White Season (1989), starring Marlon Brando, Susan Sarandon, Donald Sutherland and the great South African actor, Zakes Mokae.  During the filming of this fierce exposé of apartheid and the Soweto uprisings in South Africa, Palcy regularly received death-threats from apartheid supporters enraged by this powerful commentary on resistance to legal racial segregation.  Impressed by her vision of the project, Brando not only came out of self-imposed retirement to do the film, but also agreed to work for union scale, a pittance compared to his normal fee.  For a performance lasting under thirty minutes, which also speaks volumes about gifted directing, Brando received an Oscar nomination for best supporting actor as the provocative human rights attorney, Ian McKenzie.  “A Dry White Season is political cinema so deeply felt it attains a moral grace,” wrote Rita Kempley of the Washington Post, “A bitter medicine, a painful reminder, it grieves for South Africa as it recounts the atrocities of apartheid. 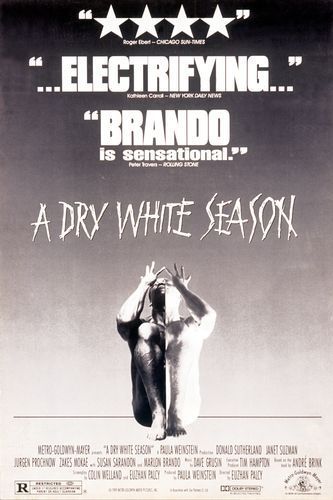 Her other films have won the top prizes at Cannes, Venice, and other major festivals, and the list of honors that she has received from the French government, such as Chevalier de l’Ordre National du Mérite (Knight of the National Order Merit) in 1994 and Officer of the National Order of Merit in 2009, are impressive.  This, however, masks the endless battles that Palcy has had to endure to make films in an industry and country often hostile to directors of color and women, an industry also in which limited, often stereotypical, roles are offered to Black actors who are glaringly absent from French television and cinema.  Findings, for example, from a 2009 study by French equivalent to the FCC (le Conseil supérieur de l’audiovisuel, CSA) show that there is very little diversity, or more plainly put, a glaring underrepresentation of “non-white ethnic groups,” particularly in “high visibility roles” in France.

Basic obstacles that Palcy has personally confronted over the years include racial typecasting as a filmmaker strictly of “Black films” and the refusal by producers and distributors to back or market projects focused on or by Black people for fear that the French viewing public would not pay good money to see stories focused on Black people, as she has been repeatedly told.  The MoMA retrospective is then not only a tribute to her work, but also a testament to her life-struggle, indeed her efforts to delicately balance the oft-competing imperatives of entertainment and social justice through the careful selection of projects designed both to entice and edify a general audience.

This is potently illustrated by her latest venture, a biopic of the legendary “Queen of Gospel” and civil rights activist Mahalia Jackson, coupled with Palcy’s daring, if not redemptive, casting of Fantasia in the lead.  This young artist’s admitted functional illiteracy and other personal demons, along with the well-known pitfalls associated with a rapid rise to stardom, would give serious pause to a less adventurous director.  But, for Palcy, Fantasia embodies a horizon of possibilities, the fruit of which becomes evident when we (the viewing public) see and hear not Fantasia, but rather Mahalia Jackson on the screen.  Film critic Roger Ebert said it best, “Euzhan Palcy strikes me as proof that great directors can come from anywhere—but they must know they are great directors and trust they are great.”

Mesmerized by the power of film since childhood, Palcy ventured from her native Martinique to Paris in her teens to study literature at the Sorbonne and later cinematography at the illustrious Louis Lumière College.  Conscious from an early age of the absence of Black faces in French cinema, she became increasingly angered by this injustice, which she sought to rectify through her work, notably in her first feature-length film, Sugar Cane Alley (Rue Cases-Nègres), released in 1983 when she was only twenty-five.  Palcy offers a timeless, heart-wrenching depiction of shantytown life in the sugar cane plantations in 1930s Martinique through the eyes of an orphaned boy living with his no-nonsense grandmother who is determined to see him rise above those conditions.  For her poignant portrayal of “Man Tine,” the Martiniquan-French actress Darling Légitimus received the best acting award at the age of 76, not from France where she remains one of many unsung Black actors of French cinema and theatre, but from the renowned Mostra Film Festival in Italy.  Based on the semi-autobiographical novel by Joseph Zobel, this winner of seventeen international awards is ultimately more about universal themes than an individual’s struggle, themes of triumph over adversity.

Despite having gained currency through this and other projects, Palcy would continue to confront powerful racial stigma in the French and U.S. film industries, eventually leading to self-imposed exile from mainstream cinema.  Devoting her attentions instead to subject-matter little explored in French history or cinema, Palcy turned to documentary filmmaking.  Her next project would be the acclaimed three-part documentary, Aimé Césaire, A Voice for History (1994), on the life of the eminent Martiniquan-French poet, philosopher, politician and co-founder of the Black consciousness and literary movement, Négritude.  A brilliant political analyst and harsh critic of French colonialism, Césaire, who died in 2008, was recently honored at the Panthéon in Paris, the mausoleum reserved for France’s “grands hommes” by a “grateful homeland,” as the inscription at its entrance reads.

Twelve years later, having several films already under her belt, Palcy would return to a project side-lined while making Aimé Césaire: the documentary Parcours de Dissidents (West Indian Dissidents), narrated by the Oscar nominated French actor, Gérard Depardieu.  Here Palcy explores the misunderstood and nearly forgotten role of the French Caribbean opposition movement against the collaborationist Vichy Regime during World War II.  Like much of French Black history, the important role played by French Antillean teenagers, boys and girls, who answered General de Gaulle’s call to defend the “French homeland” remains largely unknown.  Ironically and similar to French colonial conscripts and Black American soldiers in World War I and II, these colonized young people risked life and limb to fight for freedoms and a country in which they were not granted those very liberties.  Palcy’s determination to breathe life into this story would ultimately compel French President Nicolas Sarkozy to acknowledge the contribution of these brave youngsters, albeit 64 years after the war.

Her other films represent the range of life experience.  Her first picture, La Messagère (The Messenger, 1975), made by Palcy before she left for Paris, allowed people from Martinique to see themselves for the first time on television as complex characters in a moving narrative about family relationships.  Palcy’s Ruby Bridges, 1998, inspired by Norman Rockwell’s painting, “The Problem We All Live With,” is a searing critique of postwar segregation in the United States.  It tells the penetrating story of the little girl from New Orleans, depicted in the Rockwell piece, who challenged public school segregation—indeed apartheid in the American South.  Her riveting portrait of the aftermath of 1971 Attica prison riots, The Killing Yard, 2001, starring Alan Alda and Morris Chestnut, is a chilling illustration of how the US judicial system has not always provided equal protection for its citizens.  Lastly, Palcy’s “Les Mariées de l’isle Bourbon” (The Brides of Bourbon Island, 2007) is a beautifully-filmed historical seventeenth-century epic that engages the issue of forced marriage and forbidden love between the colonizer and colonized within the peculiar institution of colonization itself, all set against the idyllic backdrop of the Réunion Island, one of France’s overseas territories.

Though her filmography might appear sparse for her decades of filmmaking, the quality of her work, her perceptive sense of the moment, and fundamentally her capacity to touch and inspire those who experience her films explain the staying power and defiant cinematic genius of Euzhan Palcy.

* An interview with Euzhan Palcy from which this essay derives will appear in the forthcoming inaugural issue of the journal, Palimpsest: A Journal of Women, Gender and the Black International, titled “Euzhan Palcy: Creative Dissent, Artistic Reckoning: An Interview by Trica Danielle Keaton.”

Trica Danielle Keaton is an associate professor of African Diaspora Studies in African American and Diaspora Studies at Vanderbilt University. Her publications include: Muslim Girls and the Other France: Race, Identity Politics, and Social Exclusion (Indiana University Press, 2006), Black Europe and the African Diaspora (co-edited with Darlene Clark Hine and Stephen Small – Illinois University Press, 2009), Black France – France Noire: The History and Politics of Blackness (co-edited with Tracy Sharpley-Whiting and Tyler Stovall – Duke University Press, forthcoming); “The Politics of Race-blindness: (Anti)blackness and Category Blindness in Contemporary France” (Du Bois Review: Social Science Research on Race 2010), and other articles and essays. She is currently writing her next book on anti-racism in Europe.