IT IS TIME — #Feminism4the99 – The Feminist Wire

On March 8th women—in our complex identities—across the globe and across the U.S. will join together to make our resistance against the exploitation of women in all its guises public, collective and visible. #MeToo and #TimesUp are two recent public displays of the outrage against sexual exploitation in its harassing and assaultive forms—from sexual intimidation to rape. This intimidation and oppression exists everywhere our labor is done—in each and every kind of work we all do.

Our moment—women of every variety and across our race and class—is filled with chaos, and exhaustion AND amazing acts of resistance. Women of color—Black, South Asian, Latinx, Indigenous, and…[on and on]—have been resisting their coercion for decades against colonialism and imperial domination. Black women fought first as enslaved laborers in chattel slavery in the U.S.—then the courts, then against police coercion, etc. Feminisms of all sorts have demanded recognition of women in the labor force, as domestics in their own homes and hired care-givers, as consumers, as service-workers, as home-aides, as…[on and on]. “We”—the big “WE” do not want to limit the breadth and scope of our labors, and our laboring.

But much of women’s labor is often not recognized and is usually made invisible to others. For much of this labor there is no wage, or an unfair one due to sexual exploitation. Few women earn at the rate of their male counterpart. (72 cents to the dollar is the usual conversion). The movement #FightFor$15 expresses the demand for a living wage—from the waitress, to the caregiver, to all workers.

If ever it made sense to work with whatever differences exist between us and stand together, this is the time. With Donald Trump continuously demeaning women—his own bragging of “grabbing pussy,” the multiple sexual harassment charges against him that he refuses to address, his continual defense of sexual predators and domestic louts in his administration, it is time to show our muscle.

Given the explicit white supremacist policies endangering immigrants, refugees, and any person of color, women of every color, especially white women, must stand in resistance openly, publicly and together in this moment.

On March 8, 2018 come together with other women—in your apartment building, at your day care drop off center, at your job, with your friends, on a march, on a demo, and take an hour to support and love each other. For incarcerated women, know that we will be carrying signs of rebellion on your behalf. For women too disabled to come together, let us find and make new venues.

Whatever any of each of you can do, let us know by sending a note of what you are doing to https://www.womenstrikeus.org.

Let us end the double day of labor.

Let us end the triple day of labor.

Let us end sexual harassment of every sort—from the workplace to policing and prisons.

Let us end sexual violence in every form.

Let us find our strength in numbers.

Let us find our strength in our mutual support of each other.

Let us use our strength in building bridges and learning from each other and caring for each other as we would care for ourselves.

If you want to make a public stand against the terror of misogyny and its capitalist exploitation of women, especially women of color, transgender women, women who are disabled, women who are incarcerated, homeless women, women of the working and middle class, women in our troops, take time on March 8 to come together.

Women—99 percent of us—are the workers of the world. We—every kind of us—hold up more than half the sky!!!!

On 8 March, we will go on strike against gender violence – against the men who commit violence and against the system that protects them.

Last year on 8 March we, women of every kind, marched, stopped work and took over the streets in fifty countries across the world. In the United States we rallied, marched, left the dishes to the men, in all the major cities of this country and countless smaller ones. We shut down three school districts to prove to the world, once again, that while we sustain society we also have the power to shut it down.

8 March is coming again and things have gotten worse for us as women in this country.

And for the full statement: https://www.womenstrikeus.org/2018/02/02/we-need-a-feminism-for-the-99-thats-why-women-will-strike-this-year/

No action is too small and no imagined act of resistance too big. Let us see each other and give each other support on March 8. Then “we”—the 99 percent—will take this forward for rebellion in 2018. 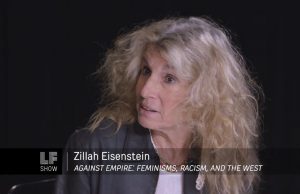 Zillah Eisenstein has been a Professor of Politics at Ithaca College in New York for the past 35 years and is now “Distinguished Scholar in Residence” there. Besides THE AUDACITY OF RACES AND GENDERS: A PERSONAL AND GLOBAL STORY OF THE OBAMA CAMPAIGN (2009, Zed Press, London; Palgrave, U.S.), her books include among others: SEXUAL DECOYS, GENDER, RACE AND WAR IN IMPERIAL DEMOCRACY (London, Zed Press; New York, Palgrave, 2007); AGAINST EMPIRE, ibid.; HATREDS: RACIALISED AND SEXUALIZED CONFLICTS IN THE 21ST CENTURY, (Routledge, 1996); GLOBAL OBSCENITIES: PATRIARCHY, CAPITALISM AND THE LURE OF CYBERFANTASY (NYU PRESS, 1996); and MANMADE BREAST CANCERS, (Cornell Univ. Press, 2001). For more information see: https://zillaheisenstein.wordpress.com/.