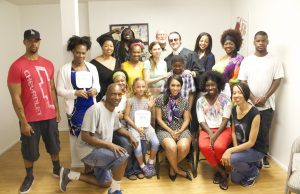 On November 18, 1978, more than 900 people died in a mass suicide/murder at the Peoples Temple Settlement in Jonestown, Guyana. Based on the acclaimed novel by Sikivu Hutchinson, the short film White Nights, Black Paradise explores the relationships, moral dilemmas and politics of a multi-generational group of African American women who emigrated to Jonestown.  The novel and film are the first ever to explore the tragedy from the perspective of black women (queer, cis, straight, atheist/agnostic), who were the majority of those who died in Jonestown.

Join us on November 17th at 6:30 pm for a screening and discussion with the cast, author/director Sikivu Hutchinson, and special guest Leslie Wagner-Wilson, author of the book Slavery of Faith, an autobiography of her life in the Peoples Temple and escape from Jonestown.  The film features a talented cast of actors from L.A.’s own African American Robey Theatre.

Co-sponsored by the Knight Program for Media and Religion.