Paying it Forward Instead of Looking Backwards – The Feminist Wire

Home / Black Girls / Paying it Forward Instead of Looking Backwards

Paying it Forward Instead of Looking Backwards

There is an intense dialectic between being a professional feminist who works to end all forms of violence against women and a survivor of childhood sexual abuse. My life experiences propelled me into the anti-rape movement, and the movement makes sense of my life experiences. I’ve survived rape at 11, incest at 14, pregnancy at 15, gang rape at 16, and sterilization abuse at 23, but I would not forego any of those experiences. They contoured my glorious emergence as a proud, self-aware, and self-determining Black woman who unflinchingly looks life in the eye and struts proudly against all adversities. I had to decide that my trauma did not define me, although it grooved deep crevices in my mind into which it can be too easy to slip into depression. I fight these patterns daily and grow stronger with each victory. My spirit’s soul is the boss of me, not my mind, or my body, or the men who left their dirty fingerprints on my life story.

My service at a rape crisis center in the 1970s in my twenties taught me how invaluable professional therapy is in helping me stay present in my life and not seek to escape my lived experiences, as I used to do through drugs and sex work as a teenager. Instead, I learned in the company of other anti-rape sisters that fighting the numbing violence of sexual and reproductive oppression could become fuel for my passion and deepen my love of activism. Activism is the art of making my life matter. When I’ve told my story for the past 40+ years in small gatherings and national media, other women appreciate my example and find the courage to speak their own truths and be awed by the results.

All this self-confidence in knowledge gained through my lived experiences and my years as a Black feminist working in the Black nationalist, feminist, and human rights movements came crashing to a halt a few years ago at a family reunion. A 40-year-old niece secretly revealed to me that one of my brothers had committed incest against her when she was twelve. Burdened with this knowledge, I urged her to confront her father and let him know the secret was out – at least to her and me. She courageously did, and her story was confirmed when my beloved brother spent the rest of the reunion studiously avoiding me. Every time I entered a room, he caromed away as if we were two billiard balls struck by the same cue. Another of my five brothers noticed something was amiss and asked me afterwards why my joy at the family gathering abruptly disappeared. I shared the story with him. He doubted its truth because it painted a caricature of an elder brother neither of us could recognize.

I wondered what next to do, besides continuing to talk to my niece. I’m from a family of elderly women; my fondest fantasy is to finally be old enough to sit at the big girls’ table in the kitchen while other younger family members wait on us, bringing food and drinks and tenderly seeing to our needs. Since I am still mobile in my 60s, I’m not quite old enough yet, and I’m still the step-and-fetch-it kid to my aunts, great-aunts, and older cousins. But this day, I needed to sit at that kitchen table and ask my elders for advice. How could I be there for my niece in a way people had been there for me nearly five decades before? I believe with all my soul that this continuing cycle of childhood sexual abuse needs to end in my family, but I don’t know how to do it. My siblings are all grandparents, sometimes babysitting our grandchildren or even great-grandchildren. How can we protect vulnerable children we are so proud of?

I wanted my brother to be held accountable, but I had no idea what that meant. He’s battling prostate cancer, and we fear every reunion will be his last as his 77-year-old-body shrinks inexorably inward seeking relief from his chronic agony. I wanted to shout out my new knowledge, but feared what it would do to my niece, my elders, and me. My late mother was an incest survivor from age eight to sixteen, until she married to escape an abusive uncle who lived with her in a multi-generational farmhouse during the Depression. I wondered if my great-uncle also abused the surviving sisters and cousins sitting at this table with me. Did I have the courage or even the right to pull the scabs off their wounds when these women were in their 80s and 90s? If I don’t speak up, do I join a conspiracy of silence in which the men we deeply love continue to have sexual access to inexperienced girls in my family? My much older cousin raped me, leaving my late father impotent to retaliate to protect his baby girl when my abuser fled overseas to escape retribution. They may be good men who do bad things. Does that make them bad men, or complex people predictably acting out distorted masculinities?

I’ve spent the last four decades co-parenting with my rapist. My son knows this history, and has sought to build a positive relationship with his father. That effort predictably failed. What is our responsibility now as elders? Do other non-violent men in the family get a pass, and if not, what is their responsibility in breaking the silence and maintaining our love for each other? Our excessive sheltering of our girls and fierce insistence on the respectability politics of Christianity did not really shield any of our generations, my mother’s, mine, or my niece’s.

I thought I knew the answers to these questions. My Mom used to say, “Tell the truth and shame the devil!” This advice seemed sacrosanct until I became the one caught in the hinge of accountability. Fighting childhood sexual abuse no longer seemed so black-and-white, as my feminist principles urged. The nuances of family love, family healing, and family unity compromised my determination to uproot this festering canker in the hidden center of our relationships. Before I found the courage to speak up, my niece asked me to stay silent because she was not ready for her story to be more public. This was, at best, a temporary reprieve, because her father babysits his granddaughters. It’s a postponement of the truth that begs the question of whether the truth is even capable of providing healing as a pathway to justice and accountability.

The secrets of childhood sexual abuse of females in Black families can be attributed as a legacy of the enslavement, or the emasculation of Black men by white supremacy, or even dismissed as the politics of gender entitlement in society. We exist in a pervasive rape culture that normalizes and sometimes even celebrates violence against women.

That long pause is there because in the middle of writing this essay, I received the terrible news that my son died earlier today of a heart attack. He was only 47-years old and his name is Howard Michael Ross, without whom much of my life would not have been possible. I can’t finish this now or maybe never. I have to go to Texas to be accountable to this child. My rapist is dead. My son is dead. Now I have to see that I don’t die too soon ensure that his brief life matters too. Peace my sisters…

Post-script. I buried my son a few weeks ago and Aishah asked me if I wanted to revise this first draft. At first I declined, but then I thought about it some more. I had the joy of raising my son Howard as a child and a teenager. At his funeral, I learned about my son as a man in ways I didn’t know before.

I witnessed at Howard’s wake and funeral how more than 200+ people loved and appreciated him as a man. He was a son, a father, a husband, an engineer, a math tutor, a college professor, a chapter president of Omega Psi Phi, a Christian, a mentor, an organizer of food for the homeless, our family nexus, a barbecue expert, a champion pool and domino player, and a proud Black man! From the students who talked about how he helped them through difficult classes, to his frat brothers who laughingly complained that he got them out of bed early many mornings to deliver food to the homeless, he was a man who touched many lives. This feminist mom was gifted with such a thoughtful and caring child who grew into a fabulous man. Although he was born of rape and incest, he made me love him immediately when they put him in my arms at the hospital, and I could not go through with the adoption. I saw how he helped others love him throughout his life of service to his family, community, Q brothers, and people. One example of how exceptional he became was demonstrated by the six siblings he sought out to bring his father’s children together to be brothers and sisters in unity, despite his father’s dubious history of violating young women. What other child of rape would do that?

I now know the stark difference between sadness and depression, because my depression comes and goes. The sadness of immense grief never totally dissipates, but grows easier to bear each day. The support from my Black sisterhood helps in ways I can never express: the pinochle sister Edith who came in her walker despite her physical pain to be with me that night. The best friend Dazon who slept with me so I would not be alone. The SisterSong leader Monica who helped elicit donations to pay for expenses. My older blood sister Carol who helped raise Howard. She talked to me every day but couldn’t attend the funeral because of her own disabilities. I am grateful for all of them and thankful that I was not alone in my grief unlike how I was isolated during my childhood traumas because I couldn’t tell anyone what happened. I can now share my story because of the anti-rape movement, and each telling helps the healing. I celebrate my son because he taught me what accountability actually looks like. I had to be accountable to him and my decision to keep him. He was accountable to me and his siblings. Maybe love with accountability is paying it forward instead of looking backwards. 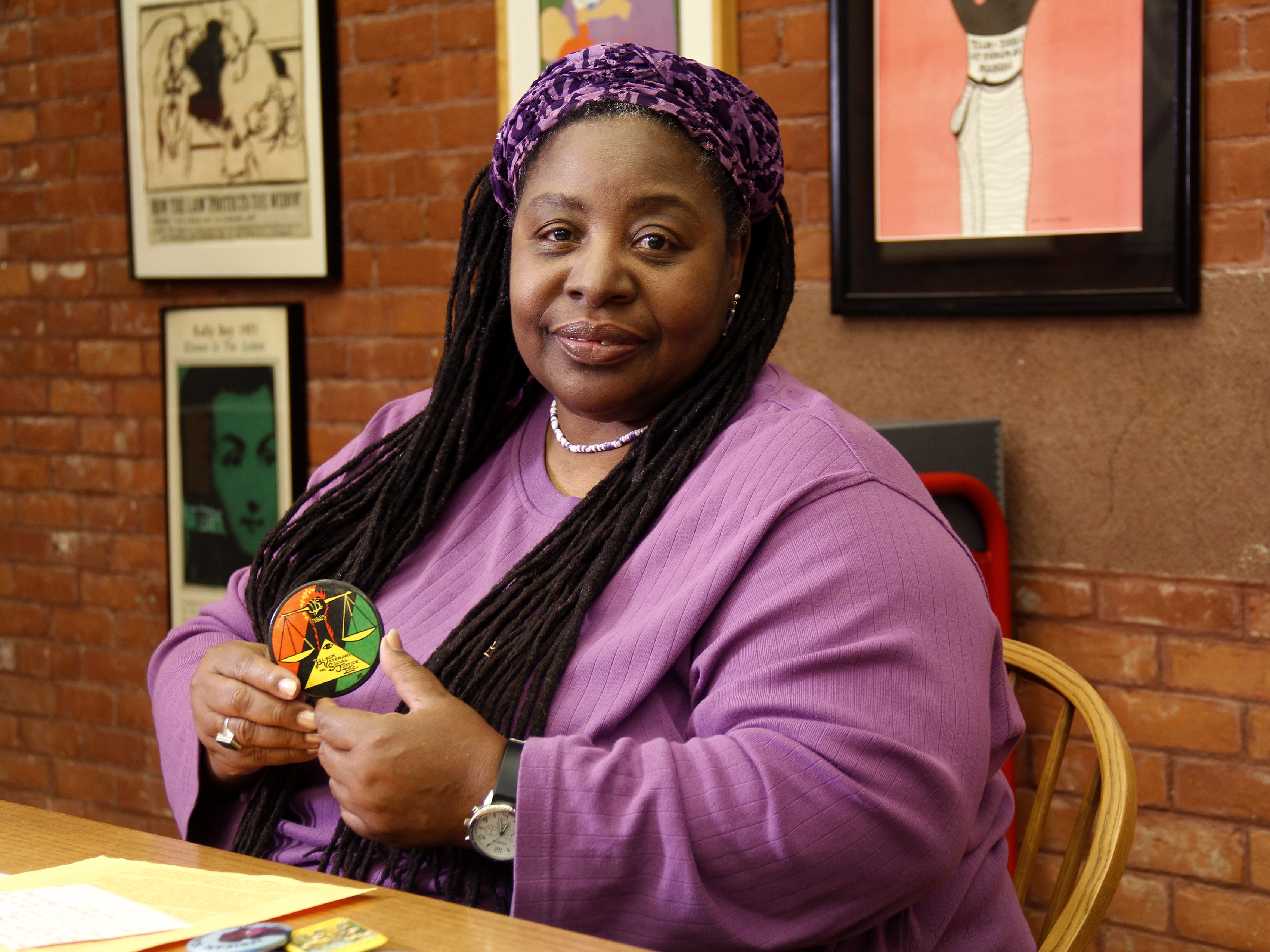 Loretta J. Ross was the National Coordinator of the SisterSong Women of Color Reproductive Justice Collective from 2005-2012. She has appeared on CNN, BET, “Lead Story,” “Good Morning America,” “The Donahue Show,” the National Geographic Channel, and “The Charlie Rose Show.” She has been interviewed in the New York Times, Time Magazine, The Los Angeles Times, and the Washington Post, among others. She helped create the theory of “Reproductive Justice” in 1994 and led a rape crisis center in the 1970s. She co-authored Undivided Rights: Women of Color Organize for Reproductive Justice in 2004.