There was once a little Black girl who liked digging holes in the mud. She liked to feel the slime of worms. She reveled in the feel of the damp grit beneath her fingertips. Dirt did not bother her. It was only that she knew if she got too dirty she’d probably get in trouble for messing up her school clothes. This little Black girl liked play with the boys. She liked to take off her shirt and run around the yard like the boys. She did not think that she was a boy, but she had never been told that there were certain things that she would eventually have to become. Black girl. The becoming was a lesson. The becoming required a disciplining of the body. The becoming required a naming of the body, a naming that made what was hers both sacred and a burden, a naming that made what was hers not hers at all. The becoming made her mother afraid. Black mother wanted baby to play, but Black girls play is often interrupted by other things. Black mother never wanted those other things for her little girl, so she tried her best to protect her baby’s body.

Black mother took Black girl to the doctor because she baby be growin’ and bubblin’ over.

Her chest be becomin’ breasts. Black mother frets over not having more time. Too fast. Training bra becomes a necessary armor for her kindergartener. Her baby’s body was becomin’ the ground upon which many battles would be fought. Black mother had already been a battle ground body, she too had once become a Black girl and then woman. Black mother’s body had already been made to bend and break and hold and birth somethings that she would have rather not birthed. She wanted to protect her Black girl baby. She wanted to keep her whole and clean, but she knew the world did not care about the sacred text that was her baby’s body. The world was too big and too cruel. The world was also too small and too close, like family.

Black mother decided that the only way to keep Black girl safe was to wrap her up in chains, chains like Jesus, Bible, silence, secrets, and ancestral scars. She longed to keep Black girl from unsolicited touch, those who might harm her, some of the same people who harmed Black mother. But, chains failed at slowin’ Black girl’s body growin’. The chains did create a distance though, between Black girl and herself, her own body which she could no longer touch without fear or shame. Black girl’s battleground body become burden, become this thing that she didn’t ask for, inherited. Her body grew fast, and as much as Black mother tried to keep her, she could not.

When it came out, what had happened that summer, three years after her Black girl body first started to show signs of becomin’; When Black girl came to Black mother and told her all of the things that had happened to her Black girl body, Black mother responded with a question: “Did you like it?” Black girl was confused by the question, but responded “No.” She knew that the question was used to evaluate if she had become fast like her cousin, who was five years older. Black girl wanted more than anything to be good, so she learned to love being good, but never learned to love what she liked. What she liked, she didn’t know how to name after that moment. Healing for Black girl came in the form of learning how to name what she liked, learning how to ask for what she liked and believing that she deserved to have what she asked for.

Black girl is a childhood survivor of incest and sexual abuse. When Black girl told Black mother what was happening there was nothing done to remove her from the situation, so she learned to live with it. She learned to appreciate the moments when her abuser was nice to her. Black girl basked in those sweet moments knowing that they would always come with a side of cruelty. She still remembers what it felt like to be slapped hard across her face. There were never any bruises because Black girl’s skin was dark and she could take just about anything, she believed. There were no visible traces, the traces were all much deeper than skin could ever reveal.

Black girl would go on to remember that summer every day for the rest of her life. After that moment migraines, depression, and shame become hers. She tried her best to reverse the stain of being fast. She became good. But good is not free. And protection is not the same as discipline. Black girl and Black mother’s body had been disciplined, but it was rare that they were ever protected. Black girl had to reeducate herself. Every day when she remembers that summer, she also affirms her own right and power to protect her body and spirit. Black girl carried shame and guilt as she grew and moved through many emotionally abusive adult relationships. She learned to seek out partners that affirmed her insecurities. They kept her in her place, kept her unhealthy and un-healing. They kept her feeling ugly, as if she didn’t deserve care. Abuse felt a lot like love to her, because of its familiarity, it kept her. Black mother wanted to keep Black girl safe, but the body can’t be disciplined into safety. The worlds around Black girl bodies must be reshaped to be able to hold her, fast as she may be—So, quit slowing her down, she was made to fly!

But the question that we were all to respond to in this forum is: What does accountability look like after Black girl done become?

After recounting Black girl’s tale [which is not just her own, but of course, it is also her mother’s shame, her auntie’s denial, her cousins’ tears, her play cousins’ confusion—there are too many Black girl battle ground body stories—] the question we are left with is: what does accountability look like when you are the only one who remembers what happened? What does accountability look like when you remind your loved ones of that thing that happened, that was not love, and they say, “I don’t know what you’re talking about,” and walk away? How does silence fill your mouth after that? Your body remembers. Your Black girl spirit remembers. You know what happened and you want to heal, but there are no apologies to be had. You are forced to swallow an inherited silence that your Black family has built as a wall of protection.

In the end, I don’t know what an accountability process for Black girl would look like. I know some things though. I know accountability requires responsibility. Those who have harmed must learn how to say “I have harmed, but I am not harm,” “I have acted like a monster, but I AM NOT a monster.” Those who have harmed have to commit to becoming better. Our Black families and communities need our people, and we need them to be well. Currently, we do not have enough tools or even language to articulate an effective model of accountability that does not replicate a carceral imaginary. Accountability requires an abolitionist ethic. We must ask ourselves: Do we seek healing or punishment? The answer of course for most survivors fluctuates—respect that.

We must ask: What is the relationship between accountability and transformative justice?

Justice that transforms harm into something else, like Black love, is hard work. This kind of justice changes both individuals and systems of oppression. In order to envision and create this new world we sometimes have to suspend our notion of reality, which is always steeped in history. What we have experienced can sometimes confine our imaginations, so we have to work against that non-creative force. This work requires intentionality. What is accountability for Black girls’ whose bodies re-remember family secrets that were supposed to be kept buried—forgotten? But like ghosts, they rise. You must remember and affirm your truth in spite of forgetfulness.

Accountability looks like more struggle; after the harm has been done, after the PTSD, after the nightmares, after all that. Accountability looks like an investment in the healing of the harm-doer. We desire for harm-doers to cease harm, but accountability asks something else of those that have been harmed. It asks us to believe that the harm-doer can be different and do better. Accountability initiates transformation in the lives of those who were harmed and those who have harmed (sometimes one person can be both). Accountability moves us towards a world where Black girl won’t have to inherit Black mother’s trauma. Black girl and Black mother no longer lean into the farce protection of respectability politics, body policing, religion, and covering up—they can’t [be] fly all bogged down like that!

So, I’ll repeat it for re-memory’s sake: The worlds around Black girl bodies must be reshaped to be able to hold her, fast as she may be—So, quit slowing her down, she was made to fly!

Author’s note:  This is an excerpt from my forthcoming memoir, tentatively titled, A Body Made Home. I want to thank everyone who has supported me in writing this piece. It was a particularly challenging task and forced me to go places I hadn’t gone before. These kinds of journeys are best if not taken alone. I thank Nkiru Nnawulezi, JeNaé Taylor, and Micah Hobbes Frazier for helping and holding me as I moved through writing this peace. I especially give gratitude for Aishah Shahidah Simmons as she has not only made space for us to share our testimonies of survival, but she has pushed us to imagine and create new Black futures where Black girls and women soar beyond scars. 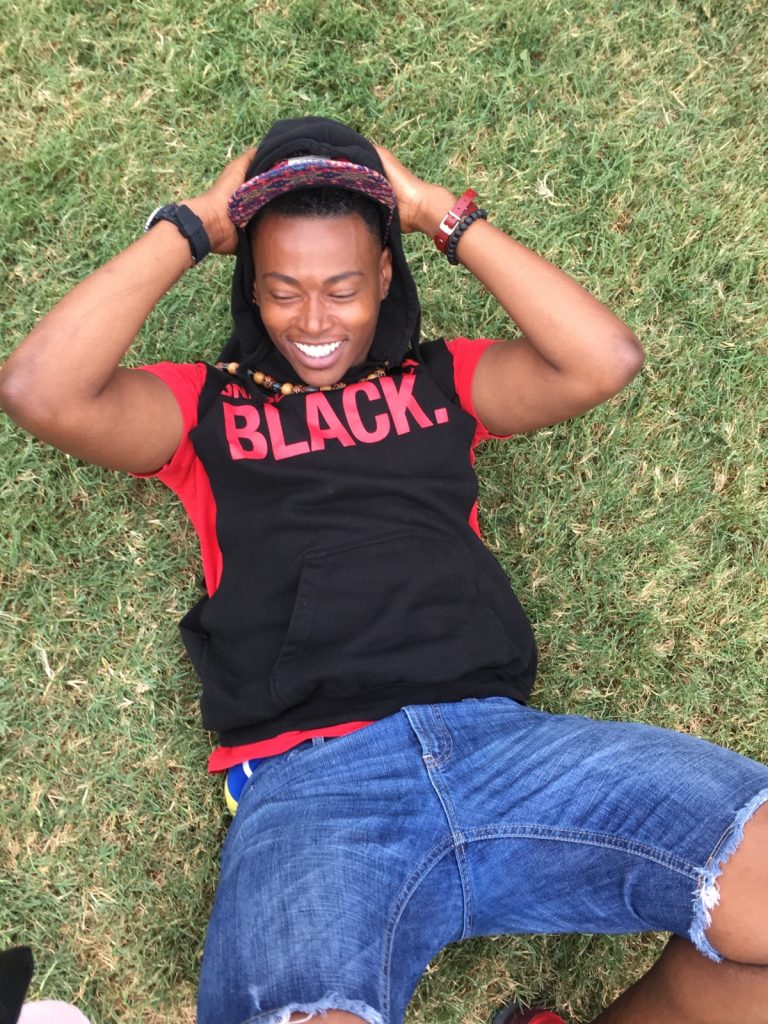 Kai M. Green is a shape-shifting Black queer nerd Boi; An Afro-Future, freedom-dreaming, rhyme slinging dragon slayer in search of a new world. A scholar, poet, and filmmaker, Dr. Green earned his Ph.D. from the Department of American Studies and Ethnicity with specializations in Gender Studies and Visual Anthropology at the University of Southern California. He joined the faculty of Feminist Studies of UC Santa Barbara as Assistant Professor of Queer Theory in Fall 2016. He is currently at work editing, along with C. Riley Snorton and Treva Ellison, a special issue of TSQ on Black Studies/Trans* Studies, and, as sole editor, a book collection entitled Black Trans Love is Black Wealth.