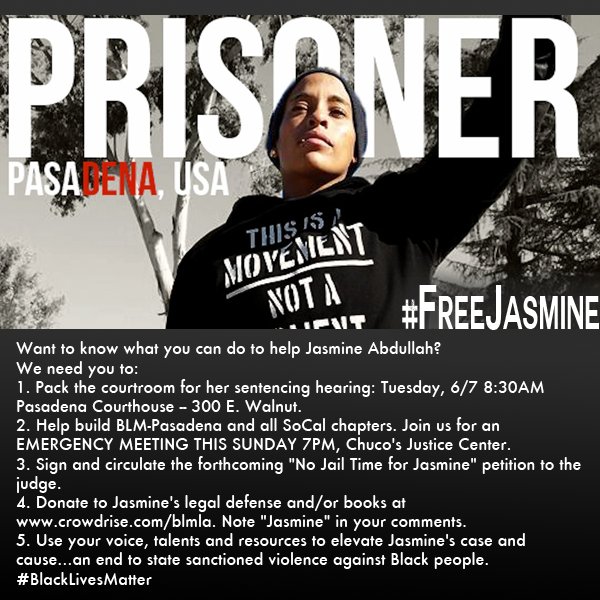 In 1900, human rights activist Ida B. Wells said, “Our nation’s national crime is lynching.”  Wells fought her entire life to stop the atrocity of lynching and bring white supremacist terrorism into public consciousness.  For this, she was maligned and marginalized, not only by the Jim Crow political establishment but by conservative African Americans leaders who initially weren’t convinced lynching was worthy of national mobilization and challenged Wells’ fierce leadership.

On June 1, Black Lives Matter (BLM) organizer Jasmine Abdullah Richards was convicted of attempted “felony lynching” for trying to prevent a Black woman from being detained by the police during a BLM peace march in Pasadena, California.  Jasmine is set to be sentenced for her “crime” on June 7th by Judge Elaine Lu.  Like the persecution of Wells, Jasmine’s conviction brutally exemplifies how state violence is used to preserve the imperial immunity of law enforcement.

As Color of Change notes, this conviction is “a perverse misapplication of a 1933 California law intended to stop lynch mobs from forcibly removing detainees from police custody and engaging in public murders of Black people.” Under California penal code, “lynching” is defined as “the taking by means of a riot of any person from the lawful custody of any peace officer” and can carry a prison sentence of up to four years. Enacted in 1933, after the lynching of two white men in San Jose, the law was viewed as a “consolation” for the federal government’s persistent refusal to enact a national lynching law to protect black lives.

Under California law, a person who is involved in a group altercation in which they are taken into, and then removed from police custody, can even be charged with “lynching” themselves. Over the past decade, the law has consistently been used to suppress radical-progressive protestors, immigration activists and black liberation organizers. In February 2015, activist Maile Hampton was arrested and charged with felony lynching after a confrontation with a police officer. The charges against Hampton were subsequently dropped.

Charging activists of color with felony lynching is a gross miscarriage of justice that effectively stifles peaceful public assembly and protest among the disenfranchised communities of color the law was designed to protect.  As Jasmine’s attorney Nana Gyamfi contends, the law is intended to “stop people from organizing and challenging the system.  There’s a political message that’s being sent by both the prosecutor and the police and the jury.”

People of conscience who oppose the racist criminalization and victimization of activists like Richards should press the California State Legislature to repeal this draconian application of California penal code and stand in solidarity with Jasmine in her court sentencing today in Pasadena.