if you sit by me

I won’t be able to hear the words

is a red spiking

opening to the tongues

no Virgil, nonetheless she means to guide me as if I were her

Dante “to visit each nexus of power,”

as if all that mattered were power, the way even thresholds to hell

and I’ve seen this before, how a tourist will place stones

on an altar, hoping anything, even an exotic devil, will follow her home,

at the chapel of the black Madonna

of the city gates, how in the street below, I looked up and could see

through the window, and having thought, nonchalantly, of taking the steps

up to view her golden face

of the forced conversion, felt so dizzy, it was as if I stood

on a wobbly axis

of some rotating crazily

paranoiac heaven and earth, and so said, no, no, I’m not going,

you’ll have to go alone,

and so she went on alone, to return, an hour later, as I was drifting

through sea glass and amber,

to say the first thing

laid out upon a table.

So at this moment, years later in the burning sun,

when this other woman wants me to

come closer, urging me to enter another shrine

which is just a burnt wall, the one wall left standing

of an ancient house,

novena candles with their nine days of wax,

an altar in the center

festering grass, I can’t go any closer. The truth is

I am sick of this story, the earth covered with wax

from so many angers

burning themselves down to nothing,

I’m afraid it’s a sign of you and me, how in this world all desire

has to become a corpse or a guttered ruin,

it’s the shrine of the dead lovers,

for worms in the can of language,

the body thinks it should not be dead, not yet, not while

it feels the wetness between its legs,

not while its lips mouth open

not with its arms and shoulders burning, not like this,

not yet, not while the heart trembles, hearing 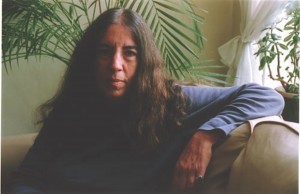 Rebecca Seiferle’s fourth poetry collection, Wild Tongue, (Copper Canyon Press, 2007) won the 2008 Grub Street National Poetry Prize. In 2004 she was awarded a Lannan Foundation Fellowship. She is also a noted translator; Copper Canyon Press published her translation of Vallejo’s The Black Heralds in 2003. In 2012, she was named Tucson Poet Laureate.