the oath – The Feminist Wire

in a sunny living room near 30th and dolores, my acting teacher handed me a poem and had me read it out loud. it was “poem about my rights.” i had never heard of june jordan before. my teacher wanted me to experience what it meant to take an oath. i don’t remember why she was teaching me about oaths, but i do remember jordan’s electrifying words and uncompromising stance. acknowledging that her body was on the line, she warned her oppressors that as long as they continued attacking her, their bodies would also be at risk, that she would not cower.

audaciousness was not my way. even when i did not compromise, i usually resisted as quietly and safely as i could. i carried fear with me like a blanket, fear gathered from experiencing abuse as a child, fear layered on walking through the world as a queer and arab person, fear that restricted my movement and halted my voice.

after reading through the lusting-for-justice, flying-champagne-bottle, genius smorgasbord of naming our destiny, i stumbled onto june’s essays. in “civil wars,” she wrote against the pressure to be polite in the face of suffering, our own or others. in the struggle not to supplant resistance with manners, i continue to engage. i fail and reengage and reremember, and june stands as an ever present model of how not to forget.

in the fall of 1997, i sat in the laundromat at hyde and california, before dawn, uncaffeinated, reading jordan’s latest collection of poems, kissing god goodbye. the title poem jolted me wide awake. i couldn’t believe she had actually written what she wrote. she told god he could not eat at her table! not just that she wouldn’t worship him but that she wouldn’t even let him drop by for a meal. this was not polite. this was no compromise. 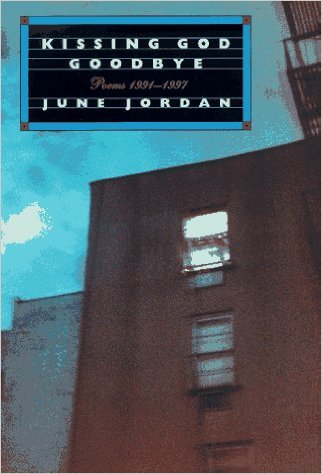 i took a friend to jordan’s reading of kissing god goodbye at a clean, well-lighted place for books on van ness avenue. when i got to the front of the book-signing line, i asked jordan if there were ever any poetry for the people classes that were open to the community. (i had gone to the final reading one semester of her class at berkeley where i was amazed at all the very different people in one room together speaking clearly and confidently and supporting each other unreservedly.) june looked at me for a moment and said i could come to the class at berkeley. two months later, i was writing and sharing a poem a week with a room full of fellow students.

the course was split into three sections: asian and asian-american poetry, arab and arab-american poetry, and latina/o and latina/o-american poetry. in each section we read poetry from those traditions, learned traditional forms, and emulated exemplary poets. when i talked about the class to people, i would list off the three traditions as if i belonged to none of them. on the first day of the arab/arab-american section, june had invited a young man to recite the koran. hearing the words took me back to my childhood when i lived with my grandmother and great-grandparents and every day heard them speaking arabic. like many lebanese, we passed as white, and we learned to avoid the costs of being arab in public. i soon wrote a poem about that day.

i stopped hiding my arabness from people who might be unfriendly or worse. being uncompromising and letting go of politeness felt a little more comfortable. i shed some of my layers of fear.

i studied and student-taught with poetry for the people for the next two years. during that time i wrote a poem in which i tried to sum up everything that was important to me, a poem, that, if i were invited somewhere where my whole self or what i believe or any of the people i cared about were not wanted, i could read it and through reading it insist on our right to exist and to be heard.

the poem became in a sense my oath, an oath i am still learning to live.

could we make a bed

could we strip off the old sheets
full of microscopic particles of dead
skin stray hairs from nights we lie waiting
for the latest state sanctioned murder
in san quentin with minute
by minute reports of the last meal
the walk to the chamber the last
words the result of the last appeal nights
of israel bombing lebanese firemen
the u.s. bombing refugees in kosovo nights
paying homage to free trade free
movement of t shirts radios calculators free
movement of money in electronic blips
big time capital whirling free
around the globe but never
never never any free movement
of people of living bodies across
borders

vast enough for us all
to lie down together
and rest 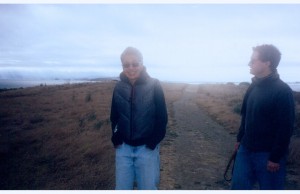 a descendant of turn-of-the-century lebanese immigrants and white, rural southern farmers, jim saliba grew up in tennessee and georgia. he studied drama at stanford university and studied and taught poetry with june jordan and her poetry for the people program at the university of california at berkeley. jim has constructed and directed performance pieces in austria and california, served as artistic director of h e l p : human elemental laboratory of performance in san francisco, and developed software for a major bank. he is currently a ph.d. candidate in sociology at the university of minnesota, where he investigates political influences on educational equity. you can read more of jim’s poetry at saliba.wordpress.com.

Related Items#TFWonJuneJordanarab-americanbody politicsCultureFearfeaturedJune JordanPoetryPoetry for the PeopleQueerWorld
← Previous Story June Jordan, Genre Fiction, and Publishing for the People
Next Story → martina pronounces her own name (ode to June Jordan)