The Funniest Thing You Ever Heard by Michelle Lewis

The Funniest Thing You Ever Heard

When Animul asked me to take our flames

& make them into one

I swear to you I thought it was a joke.

I said sure. (I didn’t laugh. I was sweeping up a floor.)

men); tall. Though unlike most (I know

Then came the churching: I walked the joke

down a little aisle cottoned in a skirt

That was the beginning of my afraid.

The end of my a-frayed-and-fairied edges.

What makes a joke funny:

not filling the void with laughter.

You have to take the beat

it is the void that’s funny.

Animul swung me around into the joke, the void.

Some stranger mothering me

a coke-nosed ex about the churching.

That was another edge I made

so funny I forgot to

do a shot of bourbon.

So then I did, left the

wore my Easter dress to a job interview.

(Someone shot out a laugh.)

It was a joke that broke the window,

a joke that dried the wall.

Maybe bourbon would make this funnier.

looking at you / is he from your yoga class? /

your old school? / only use your full and given

name / why is the desk drawer locked? / what

does this piece of paper say? / what do you have

some smithereens: glass in my clothes from

the window that doesn’t stretch but breaks.

Pieces in my underwear, what’s

the story says the man at the garage. It’s sort of funny.

If everything’s so much

a rule everything’s so many broken. Until:

a day, another severing.

Animul said I could call whomever

but they wouldn’t take it serious (was a deputy, knew everyone! served papers folded

Now you tell me that’s not funny.

Tell that one again:

of the bourbon left in me,

A girl has got to hitchhike

or else how’s a girl to get home that far?

Someone seems nice & takes me

to where I pull the bed out of the (dry) wall.

I check his registration from the glove

when he goes in to pay for gas

half bourbon, half bad ass, half something severed).

Against a rule I fray. I bourbon someone’s breath.

back in, sleep in the space it left

everything as it had been / or else done in.

I heard the joke at the gym

some months hence: Animul had tried

to church the other instructor first

who was prettier, but found out

she was not as lost so I was

you have to laugh because it’s

funny. Funny as hell, so funny

I throw up in the bushes behind

a Sprite & a balloon. Funny cause

they look at me then through.

Made a cardboard cutout of a sparrow, hung it on the drywall.

Wore my Easter dress to work.

Baked the truth into some poems for Animul’s psychologist.

Do tell, said the psychologist

No snow & so only the sun is

ruin. So lost. So flame. So chosen.

Animul locked me out because of

the hitchhiking, because what name

on the registration because the sparrow

hanging overhead. Because the movie.

It was about two women

who did not respect their flames

then drove off a cliff.

I was cold, I paid, went in. Was them that done me in.

Animul figured I took a lesson.

Thought I was out thinking.

Cracked a hole in the drywall

had been. I mooned outside all night.

I wasn’t even watching (the guns! Brad Pitt!).

I was (from above) watching only me: each direction peopled with

our flames: our ticketed hours: my own church to

clutch the dun in / dark in

Now not even the void is funny. 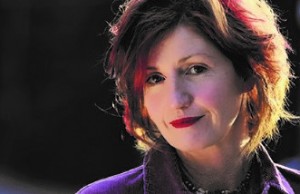 Michelle Lewis is a graduate of the Stonecoast MFA program. She has written for The Gettysburg Review and Poet Lore, and her poetry has appeared most recently in Jet Fuel Review, Spoon River Poetry Review (Winter 2016) and The Indiana Review (Summer 2016). She is the author of two chapbooks, The Desire Line (Moon Pie Press, 2006) and the forthcomingWho Will Be Frenchy? (dancing girl press, Fall 2016).

Related ItemsfeminismPoetryviolence against women
← Previous Story Diana: impending by Ian Ellasante
Next Story → The Night I Met Gregory Corso, or Go Pump Yourself by M.J. Tenerelli