I was standing near the entrance of the bus station, waiting for my parents to pick me up. The next day was Eid al-Fitr and I had returned home my freshman year of college to spend the holiday with my family. Late as it was, I leaned against a wall, shifting under the heavy weight of my backpack. From the corner of my eye, I noticed a Pakistani boy. He seemed familiar but I could not place the face. I turned away.

Shortly he approached me, “As-salam waleikum Hina.” As he came closer, I realized he was Omar, a friend of a friend. We had met once before. We did the usual small talk: He was waiting for the bus to spend Eid at home; he was pre-med; I was majoring in undecided; he made some snarky comment about my academic uncertainty. End of conversation. I made nothing of this encounter until I met up with my friend later the next day at Eid prayer where I mentioned I had a run-in with her friend Omar.

“I know,” she said. “He texted me to ask if it was appropriate to approach you and speak with you.”

“Um why did he ask your permission?” I asked confused.

“Just because you wear the hijab. He didn’t know if you were okay with talking to boys,” she said.

“That’s rude. Why wouldn’t I be okay with it?” I responded angrily, “What does the hijab have to do with any of it?”

She just shrugged her shoulders.

This bothered me for quite some time, but I attributed it to his pompous character instead of the prevailing toxic gender-sexuality constructions among Muslims. This latter idea only became apparent to me much later when I realized the standards of female-male interaction were unrealistic, unreasonable, and subjective. Sexuality and the physical body are ambiguous spaces by which women and men interpret and measure religiosity and moral values. To hijab or not hijab was not the question—it was much more nuanced than that. Showing too much ankle made me “modern,” the inches of forearm skin correlated with immorality, the tightness of my clothes marked my closeness to God, and the amount of hair shown beneath the hijab demonstrated my looseness.

But it didn’t stop there. Shaking hands with a man was questionable, eye contact was flirting, and linking arms was a scandal. We were taught never to socialize with boys and yet we were expected to work with them on a daily basis and one day marry. Marriage became another level of difficulty because it was socially expected; and yet, once “marriageable age” arrived, I had failed to develop any meaningful relationships. And so I was placed on the stack of on-file biodatas where I was judged purely on beauty—socially constructed and ironically the very thing I was told to “cover up.” Again, I was observed on the same mundane scale of forearm-ankle skin visibility.

And all of these “rules” only pertained to heteronormative understandings of gender and sexuality. Just imagine the destruction when the LGBTQ continuum was added to the mix. No matter, the mission was to cast aside “those diseased” from our communities all together.

All these Islamic interpretations of female bodies and gender interactions play out on a daily basis within the range of friendships and relationships among Muslims. And contrary to what many Muslim women would claim, these notions impact female friendships the most. Silent judgments and vocalized disagreements define relations between women.

Consistently, I have found it challenging to maintain friendships. I was either deemed “too Islamic” or “unIslamic” and even worse, too “conservative” or “liberal.” I found myself reduced to binary categories, stripped down to an object, made hyperaware of the physicality of my body.

Society’s obsession with the hijab has undoubtedly played a huge part in the objectification of Muslim women—an impediment to genuine relationships in a way that has uniquely impacted women and not men. But this is not a call to abolish the hijab. It is without question that women should have the right to choose what they wear and the meanings they impose to it. Yet, the number of times the hijab has been addressed merely within the Muslim community is exhaustive and signifies there is a dire need to transform discourse universally on Muslim women’s sexuality and gender dynamics. There is too much exotification of women, too much emphasis on the male-gaze, and absolutely no appreciation for alternative assemblages of sexuality (especially ones that challenge the hijab). This toxic combination threatens Muslim women’s relationships.

There is an absence of strong female Muslim role models that can compete with the mainstream voices of Nouman Ali Khan and Wisam Sharieff, who often add fuel to the fire with sexist jokes appealing to the mobs of Mipsterz. Inaccessible fringe voices that advocate for flexibility of interpretation and provide a feminist lens to a culturally embodied text remain almost exclusively within the realms of academia. And when these academic voices do emerge, they are often met with an aggressive, angry response, promoting further divisiveness within the Muslim-American community.

If we are too busy othering each other, how are we able to address our marginalized position in greater American society? It’s time we move past the reductionary forearm-ankle skin visibility measure. 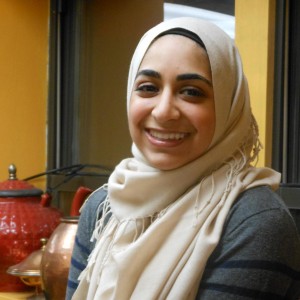 Hina Tai is currently an MPH candidate at Columbia University with a specialty in Sociomedical Sciences. She received her undergraduate degree in Journalism and Anthropology from Boston University. She is also the Managing Print Editor for The Islamic Monthly. She has written extensively on issues affecting Muslim Americans for numerous publications including ILLUME Magazine, MuslimGirl, International Political Forum, White Ash Literary Magazine, and The Islamic Monthly. You can find more of her writing on her blog, Perception by Apperception.

Related ItemsfeaturedIslam
← Previous Story Self-Determination and the Struggle to End Violence Against Women Living with HIV
Next Story → EMERGING FEMINISMS, An Introduction to the “Collective Voice of the Voiceless” Forum on Campus Violence, Resistance, and Strategies for Survival