The Women’s Mosque of America: Understanding Diversity and Empowerment – The Feminist Wire

The Women’s Mosque of America: Understanding Diversity and Empowerment

One Friday afternoon, as I was settling down to listen to a sermon in my local mosque in Orange County, California, a woman leaned over to me and whispered that I needed to take my toenail polish off to properly complete ablutions. Many people believe that since water can’t touch nails because of the impermeable polish barrier, one can’t perform ablutions. Without successfully performed ablutions, my prayers would not be accepted.

My toenails have been a source of contention in mosques spanning the globe. I’ve been lectured on the moral ills of nail polish in languages I don’t understand. While I interpret lectures on ‘correct’ practices as policing, many women feel these corrections are religious and generational duties that contribute to community construction.

While being scolded for nail polish may seem trivial, it is actually an entry point into a set of debates regarding how to accommodate the inherent diversity of beliefs and practices within religious spaces, especially among young American Muslims, many of whom find these comments intrusive. It is my understanding that this experience is also the basis for a new initiative, the Women’s Mosque of America.

The Women’s Mosque of America (hereafter called the Mosque) is attempting to bridge gender gaps in the American Muslim community. The Mosque first opened its doors to a female-only congregation in late January for Friday prayers. While in many masjids (mosques) around the country sermons are given by male religious scholars and community leaders, in the Women’s Mosque the sermon is given by a khateebah, a female orator. The mosque, located in downtown Los Angeles, welcomes Muslim women at all degrees of practice and belief and of all sects and backgrounds. 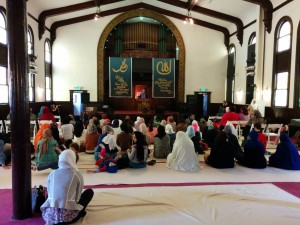 Photo courtesy of: The Women’s Mosque of America.

The Mosque is the first official all-women’s mosque in the United States. While female prayer circles and Qur’an groups are common, the Mosque represents an important departure from informal groups. It is likely that one of the Mosque’s major goals is to be recognized among nation-wide Islamic organizations, many of which are led by male advisory boards and follow the teachings of male scholars. Some of these organizations, such as the Council of American-Islamic Relations (CAIR), should not be pigeonholed as male-only groups. In fact, there are a number of eminent female lawyers and activists associated with CAIR who conduct necessary civil rights work for American Muslims. However, the Mosque’s efforts to create an institutionalized space are based on the acknowledgement that women are marginalized in the political arena of American Islam. A formal space offers legitimacy.

The first question the board faced in creating the Mosque was how to reflect an inclusive mindset in policy. The organizers tackled this issue by having a diverse set of khateebahs. Ideal khateebahs reflect the diversity the Mosque embraces, including diversity in ethnicity, background, and sectarian affiliation. This diversity is also reflected on the advisory board itself, which is composed of men and women, Shias and Sunnis, and members from the various schools of Islamic jurisprudence who maintain varying degrees of practice. Finally, diversity is reflected in the Mosque’s “come as you are” policy, which recognizes that there is no one definition of female modesty, and pluralism in religious practice should be respected and encouraged. The goal is to avoid policing among congregation members.

On one hand, this view of diversity is beautiful. It is a much-needed reminder that the American Muslim community is not a monolith. We define ourselves according to a wide ranging set of beliefs and practices informed by family background, upbringing, and experiences, in addition to varying interpretations of religious texts. On the other hand, this idealism begs the question: how can the Mosque practically implement and maintain these policies?

The first step, according to Sana Muttalib, former co-President, is to make the Mosque’s policies clear to the entire congregation. The khateebah announces this policy before her sermon and board members to keep an eye out for women policing other women within the congregation during prayer.

I can’t help wondering how the woman who commented on my toenails, who may have genuinely believed that she was helping me become a more pious Muslim by pointing out what she saw as a critical flaw in my practice, would feel being told her comments are inappropriate? This question is important for women who feel such commentary is a religious duty that contributes to building a community. Would she feel included? How diverse can the Women’s Mosque really be?

The real hurdle probably won’t be policing within the congregation, but rather reaching out to women who, on the basis of their place of origin, age, class, and/or personal experiences, might feel excluded by the Mosque’s policing policy. One can hope that as the Masjid grows, its congregation will organically adopt inclusive behaviors, and top-down policing efforts will be abandoned.

The second issue at hand relates to the interrelated goals of female empowerment and national recognition. The Mosque’s acknowledgement that women are marginalized within the American Muslim community, especially when it comes to Islamic interpretation and knowledge, is addressed by its goal of empowering women to obtain knowledge about Islam. The Mosque intends to plan classes and conferences for men and women alike, with female speakers and lecturers presiding as a way to allow the community to accept women as religious authority figures.

Since the Mosque is also a place for women gain a female perspective on Islam and the Qur’an, one must stop to question how perspective, or interpretation, relates to knowledge. Returning to foundational texts is an age-old practice in all monotheistic faiths. Many religious women’s movements emphasized all-female Torah, Bible, and Qur’an study circles in their search for authentic sources of religiously-based female empowerment. Relying on the Qur’an as a foundational text for understanding Islam can be problematic, as it does not always directly establish practices or prescriptions. Approaching the Qur’an as a didactic or prescriptive text requires interpretation.

The Mosque’s Qur’an Literacy Program is still being developed, and one option is to read Muhammad Asad’s English translation of the Qur’an, which Muttalib described as an “open” translation, one that is accepted within a wide range of religious beliefs and schools of thought. Asad is a popular figure within the American Muslim community. A Jewish Austro-Hungarian convert to Islam, Asad, originally named Leopold Weiss, is believed to provide an authentic translation and interpretation precisely because he came to Islam as an outsider. Reading his translation is a peculiar way to obtain a female perspective on Islam.

A better option might be Amna Wadud’s Qur’an and Woman: Rereading the Sacred Text from a Woman’s Perspective, which provides a re-reading of key words and passages that have been used to justify structural and literal violence towards women and limit a woman’s Islamic rights. Wadud’s book argues that the Qur’an promotes female equality but that historically, patriarchal states and communities have used the Qur’an to justify female oppression. In this framework, male translators, interpreters, and scholars, not Islam and the Qur’an, are to blame for gender inequality in Muslim societies. Wadud, also a convert, presents what is generally seen as a radical interpretation of the Qur’an.

The woman who commented on my toenails works at my local mosque. Originally from Lebanon, she migrated to the U.S. as a young bride. She serves as a member of my local mosque’s advisory board, and the mosque could not function without her. Her whisper that day was a mixture of sternness and softness, like a teacher’s instruction to her favorite student. It was not an order, but a reminder. I have a hard time believing that an older woman who grew up a world away from Orange County, CA, a woman who I respect and admire, was judging my red toenails.

In trying to create an open, diverse, and mainstream space, the Women’s Mosque has set itself up to face a number of challenges. The first challenge is what I see as a tension between the organization’s goal — openness to women at all degrees of practice and from diverse backgrounds — and policing to obtain organized diversity. One hopes that as the Masjid’s congregation grows to include open-minded women who are willing to accept diverse peoples and beliefs and be accepted by the congregation in turn, policing will cease to be a method for maintaining diversity.

The second challenge is how the Mosque positions itself as an ideological space within the diverse and contested political terrain of Islam and gender in America. The Mosque is essentially a space created on the presumption that within segregated congregations, Muslim women need to submit themselves to practices they might not necessarily agree with in order to be part of that particular mosque’s culture. Rather than giving up on going to mosques all together, these women can come to the Women’s Mosque of America.

Yet, to avoid being perceived as a fringe space and eventually become mainstream within the eyes of the North American Muslim community, the Women’s Mosque compromises its mission. Reading Asad’s translation because it’s considered more “open” than Wadud’s interpretation, which has often been located on the outskirts of mainstream Islam because of her “radical” stance critiquing the sexist history of Islamic interpretation, is a decision to make the Mosque more palatable to the mainstream while compromising the Masjid’s goals, which include embracing female perspectives on Islam. The Mosque will have to reconcile what seem to be two disparate issues: empowering the congregation by offering female approaches to Islamic knowledge and appearing legitimate in the eyes of the American Muslim community.

It remains to be seen how the congregation will evolve and if the Women’s Mosque of America will be accepted within mainstream Islamic circles. I can confidently say that the Women’s Mosue of America, the first of its kind in the United States, has set itself up to change the current landscape of American Islam in unique and necessary ways.

Click here for more information on the Women’s Mosque of America. 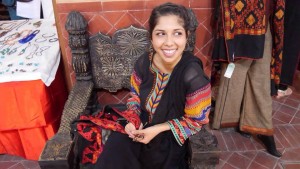 Madihah Akhter is a PhD student focusing on modern South Asian history. Madihah received a Master’s in history from Tufts University and a Bachelor’s in history from UCLA. At Stanford, she is also completing a PhD minor in the Feminist, Gender and Sexuality Studies program. Her research interests include Islam in South Asia, gender, intellectual history, postcolonial theory, historiography, and world history. Madihah’s MA thesis focused on feminism and autobiography in Pakistan through the lens of the feminist poet Kishwar Naheed’s Urdu autobiography, Buri Aurat ki Katha (A Bad Woman’s Story). Madihah’s current research concerns gender and governance in princely India in the early twentieth century.