# (or, Counted without Counting) – The Feminist Wire

# (or, Counted without Counting)

I feel chilly, so I grab my favorite green canvas jacket from the trunk and return to the warmth of my car in the parking lot of a minimum-security prison. Through my rearview mirror, I am watching for the return of a family member from his work crew assignment. The pickup trucks pull up and drop off men who have been out working all day for the state Department of Transportation (DOT). It follows a formula, and I can see that this is by design. Green jackets, trousers, and boots obscure the individuality of these men, and they become mere values plugged into the formula in which the fixed positions of white masculinity and Black nothingness play out. White man drives up in DOT truck with a truckload full of Blacks wearing the standard issue green canvas jacket and trousers. White man in DOT truck watches Blacks ring bell and then wait there, shivering in the winter cold. White man in the heated DOT truck waits five to ten minutes while other white man moseys up to unlock the gate and waves confirmation to the first white man that he’s in charge of these Blacks now. White man in DOT truck drives off to the lot behind the prison, and other white man pats down Blacks one at a time, making sure that the number who went out is the same as the number who came back. Minutes later, another white man drives up in another DOT truck with another group of Blacks in the back. Repeat.

Serena Williams is one of the most recent people to use the Twitter hashtag to comment on the police killing of Black people in the United States:

Our naming as Black has long been bound up with our conversion into arithmetic.

On the other hand, the numbers seem redundant because the names become saturated and overtaken by the deeds the person did in the minutes or seconds before the police ended their lives. Amadou Diallo reached in his pocket and grabbed his wallet. Anna Brown was trying to see a doctor. Freddie Gray made eye contact. Sandra Bland was driving to her job at Prairie View A&M University. Was walking away from a fight with a store owner who accused her of shoplifting some juice. Was seen on camera running unarmed away from an officer. Walked home from the store with Skittles and Arizona iced tea. Had just broken up a fight in front of a store where he sometimes sold loosey cigarettes. Was lying on her grandmother’s couch. 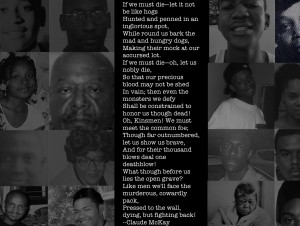 We know that we are perceived at deep and widely held levels of collective thought as less than human, described as superhuman and animalistic in strength and aggressiveness, something that justifies our killing, our overkilling, our confinement, our accumulation as inmates and corpses. We are always only a trigger’s length from being “Coroner’s Office Jane Doe #1” or “Central Booking #186479.” No wonder, then, we are on intimate terms with the “#.”

And so we take to Twitter. Seeking to empower ourselves after the latest outrage against our humanity, we distribute footage taken from cellphones, bodycams, and security cameras. And in doing so, we attempt to re-appropriate the number sign as the Twitter hashtag. We write the names of our dead after hashtags, linking their deaths to other deaths via other hashtags like #BlackLivesMatter or #SayHerName.

The ritual of hashtagging our dead is meant to commemorate, engage, connect, and even overwhelm us to action. It’s not evidence that we Black people are being killed in any greater numbers by police, security forces, and vigilante citizens since the advent of Twitter than at prior moments in history. Again, we have no government that deems our lives worthy of such measures.

No matter. We already know that we are living in the most recent manifestation of a long Black Holocaust that extends back through all the genocides and slaughters and wars that brought Africa and its children under the boot of Europe and global white supremacy and have kept it there, from Sudan and West Side Chicago, back through the long stretch of time. What is different is that we are able to parade that truth in front of our eyes— that our lives do not matter—presented with a frequency and immediacy that convincingly argues for action now. The hashtag is our chosen metonym for making an accounting of ourselves.

But the structure we live in has its own prior tradition of hashtagging us that is far bigger than #BLM and #SayHerName or all the names after all the hashtags combined. This tradition has a 500-year history of reducing Black people to a pile of hashtags, portable and saleable as items of value for any purpose whatever. Is there any political formation presently articulated out of that history— the history of cargo, told in inventory sheets that strangely list body counts, not as human beings lost at sea to be mourned but as insurable losses? 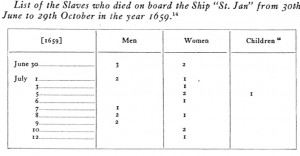 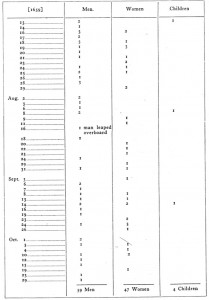 Where are the politics of those who are counted without counting?

Some guidance on this problematic might come from Hortense Spillers[2], whose essay “Mama’s Baby, Papa’s Maybe” describes the shape of this 500-year paradigm as a “grammar” of violence with no room to call us by our right names. Grammar is the structure of language into which words are plugged. Much like Black bodies in the sights of a police weapon, one can be substituted for another, and the grammar will stay the same. Looking at Elizabeth Donnan’s edited collection, Documents illustrative of the history of the slave trade to America: Volume 1: 1441-1700[3], Spillers ponders the “arithmetical” uniformity of the numbering assigned to African bodies taken and those expired:

What confuses and enriches the picture is precisely the sameness of anonymous portrayal that adheres tenaciously across the division of gender…. If in no other way, the destruction of the African name, of kin, of linguistic, and ritual connections is so obvious in the vital stats sheet that we tend to overlook it. Quite naturally, the trader is not interested, in any semantic sense, in this “baggage” that he must deliver, but that he is not is all the more reason to search out the metaphorical implications of naming as one of the key sources of a bitter Americanizing for African persons. (Spillers 216)

The original hashtag moment for Black people—the “high crimes against the flesh” (206) of slavery— fed a steady diet of steroids to the newborn structure of global capitalism. Without the already fungible blackness of Africans, modern capitalism could not have been born.[4] So powerful were these violent “initiative strikes” (209) of slavery that it “transfers” (207) across diachronic time and constitutes the synchronic time of “the sociopolitical order of the New World” (206)—from chattel slavery, to sharecropping, to ghetto, to prison, to school, to foreclosure and always evolving new modes of the chattel slavery from which the 13th amendment supposedly freed us. Another way of saying this is that the paradigm of slavery encompasses one long historical moment, more than 500 years old and counting. The numbers themselves do not tell that story. The tendency to compile Black people as bodies, numbers, and hashtags does. The name for that violently reductive tendency is fungibility (Wilderson 89).[5] That is the grammar of Black life in this racist society.

Serena Williams’s exasperation about the number of hashtags echoes many other comments about the accumulation of hashtags in places where Black names used to be. Spillers, like Serena Williams, contributes a theory of structural violence, an analysis not of something that “happened” to Black people, but of a violence that is so longstanding now that it is inherent to blackness in the way grammar is inherent to language. For Black people, violence is a structure, not just an event (Wilderson 248). 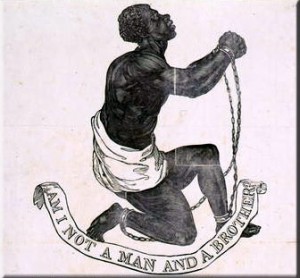 What, then, does it take to claim the project of renaming of Black people in the middle of an ongoing grammar of slavery that barely even gives Black people the space of a hashtag before compiling another hashtag so that it becomes hard to tell the difference between us, even in our spectacular deaths? The notion that we are being accumulated—that we are “fungible— is, in some ways, all we need to know. As with prior slogan-based movements—including “Ain’t I a Woman?” and “I am a Man”—we are not, and never have been, human subjects in the sense needed for a protest movement like #BlackLivesMatter to work on its own. #BLM must continue its vital work, yet it must be backed up by force in reserve unless it is solely an appeal for those protected by the structure to incorporate us into it. The ethics guiding the attempts to make Black lives matter must proceed from this understanding, the perspective from the cargo hold with nothing to lose by destroying the ship. Without Black fighting formations to enforce the mattering of Black lives, Black Lives Matter can only aspire to become “White Opinions Matter.” And if we are counting on the goodwill of our killers to incorporate us, the one number that we cannot count on is time.

I talk with my loved one for more than an hour. In the middle of our conversation about the meaning of “Islam,” a prison guard ducks his head in the door, looks at each of us, and counts, “One…two…” and then he ducks back out. I know our time has long been up, but it takes me a moment to track what has just happened. From the guard’s perspective, there’s an additional nigger in a green canvas jacket. He has included me in the pre-dinner count of inmates. I have to get up and prove that I’m not his to count. But in order to do so, I will have to leave behind my loved one. Then I will have to approach this white man. And reach into my pocket to produce my wallet and ID.

[4] “The discovery of gold and silver in America, the extirpation, enslavement and entombment in mines of the aboriginal population, the beginning of the conquest and looting of the East Indies, the turning of Africa into a warren for the commercial hunting of black-skins, signalised the rosy dawn of the era of capitalist production. These idyllic proceedings are the chief momenta of primitive accumulation.” Marx, Karl. Capital: The Critique of Political Economy: Volume 1. 1999. (translated by Samuel Moore and Edward Aveling). [Online] Available: https://www.marxists.org/archive/marx/works/1867-c1/ch31.htm (accessed 8/19/15)