Mornings, early, she rose with her dog, Moreno, who was, to put it mildly, the spitting image of her father, whom she had felt calling through her through the dog’s eyes, which were droopy, dark and searching as her father’s had been. It was because of this she had taken it upon herself to raise him, this third child that was to have been the pet of her children, who were now themselves grown.

They had called him Moreno on account of his coat. He was a boxer, pure bred. When she walked him, Alicia stepped to the side of the road letting cars go by, pulling the leash to her chest, practically choking the animal. If there was a rock, she stood on it. This, two or three times daily.

As she was a nervous woman, Alicia’s concerns drifted to all she loved. Now, with the children gone, they drifted toward Moreno, whose eyes, she noticed one day, had become unusually sad and suspicious.

What have you done, eh? What have you done, she asked him. One day, after a feeding, Moreno deposited himself with a long sigh on the kitchen floor, expecting nothing, which, aside from the walks Alicia took him on, was essentially what he got. He was used to nothing. Nothing from the children, from anyone. Like his owner, he was depressed. Moreno lay resting partially on its front legs staring at Alicia, who sat not far from him, doing her nails, eyeing him in return. Moreno’s eyebrows took turns raising, eyes blinking in her direction, as if to make sure she was still there, or actually there.

Alicia surveyed the fuchsia shade of her nails then the dog, then her nails. If not for you, who would know I was alive, she said aloud. Then, feeling overwhelmed with love for this creature that like her had been abandoned, she lay down on the floor with him, her hands splayed, as her fingernails were still drying. We are so alike you and me, she said to his face.

Unused to this behavior, the dog scrambled to its feet instantly, and began to back out of the kitchen. 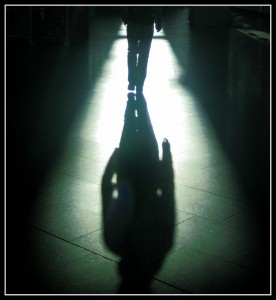 What are you afraid of? You silly thing. With some difficulty, as she was well into middle age now, with no one to assist her, Alicia got to her feet, opened the refrigerator door and pulled out the silver container with gin on ice that was awaiting her, and poured it into a martini glass, which she carried daintily back to her kitchen seat, so she could further contemplate her hands and the dog.

Somewhat reluctantly, he resettled, letting himself plop down before returning to gaze at her sadly.

Looking at the dog now, she thought of the being he had replaced, her husband, who had left her for a younger version of herself–before the children. She thought of the impracticality of men, and the kindness and dumbness of animals that she so treasured.

Is it possible Moreno, you were once my father? What an existence you have earned, if so, eh? What god that would do this? Or fate? Or karma? Eh, what do you think?

The dog readjusted himself on the floor, turning away from her, as if convinced now that she was not only going to remain nearby, but that, having gone completely mad, he could now count on her more than ever to stay.

What will I be in my next life, I wonder, Moreno? What do you think? As I have been good to you who were once my father, what will happen to me? If, the next time, I am your pet, you must be good to me, yes, papa?

The dog turned once more in her direction, then got up suddenly, giving himself a brusque shake.

You are not going outside anymore. We have just been there, papito, she said to him, using the affectionate term she had used with her father, who had been a judge. The dog tilted its head at her and its tail began wagging.

You like the name papito, eh? Perhaps I should call you, papito? Papito, there will be no more walks tonight. We have been already.

The dog began to growl, something Alicia had never seen it do, and this frightened her a little. She pretended not to have seen it, finished her martini and went back to calling her dog, Moreno, thinking that perhaps by calling him his former name, she had aroused an old ghost, angry still for being what it was now, a pet, a dog.

Forgive me my trespasses, papa, forgive me. I promise only to be good to you.

Then the dog, happy to see its owner in such an affectionate mood, approached gingerly and began licking her hand. That’s a good boy, she told him, a good boy. My one and only. 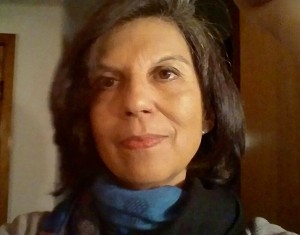 Arya F. Jenkins is a poet and writer whose work has appeared in journals such as Agave Magazine, Brilliant Corners, Cleaver Magazine, and The Feminist Wire. Her poetry recently received a Pushcart nomination, and her poetry and essays have been included in three anthologies. Her poetry chapbook, JEWEL FIRE, was published by AllBook Books. She writes short stories for Jerry Jazz Musician, which commissioned her to write jazz fiction. Creative nonfiction is forthcoming in Provincetown Arts Magazine; and poetry, in Blue Heron. Finishing Line Press has also accepted her poetry chapbook, SILENCE HAS A NAME, for publication. A graduate of Wesleyan University in Middletown, CT, Arya writes on the arts and taught creative nonfiction writing at Fairfield University for six years.