Living in Colorado I don’t meet any celebrities but I did go on a date with a former pro football player right when I felt ready for another relationship something simple but not precluding depth & he was very sweet & straightforward which was good but then he said he didn’t like to read & his text messages were a little off i.e. did you know God sometimes makes matches while we still up in heaven? I heard that from a grapevine so although his body was a wall of muscle & he spoke kindly to the waitress at dinner & complimented my 4-inch open-toed leather boots & black skinny jeans & said he wanted to learn a lot from me I saw too much work & felt like Seinfeld because it grossed me out that his food & my food went home with him in a Styrofoam container & I already have a job & a kid so I told him I wanted to move slowly & neither of us called the other back again

A guy I met on Tinder took me to see Lionel Richie at Red Rocks Amphitheater I had on 3-inch gold heels stupidly because you have to climb approximately 8,901 steps which slope at a 45 degree angle but redeemed myself by keeping a pair of flats in the car also gold luckily matching my black slacks & ecru shell & light sweater I was glad I brought the sweater even though it was June since when the sun went down it still wasn’t warm enough & my date also let me wear his jacket & wrapped an arm around my shoulders & we had just met but it wasn’t weird at all just a moment that made me love dating in my late 30s & our whole row sang along to all the songs & on that outdoor screen Lionel Richie looked like he hadn’t aged a day since 1988 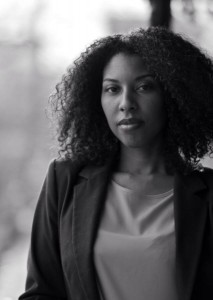 Khadijah Queen is the author of Conduit (Black Goat/Akashic Books 2008), Black Peculiar (Noemi Press 2011), and Fearful Beloved, due out from Argos Books in fall 2015. Her chapbooks include I’m So Fine: A List of Famous Men & What I Had On (Sibling Rivalry 2013) and Exercises in Painting (Bloof Books 2016). Individual poems and prose appear or are forthcoming in Fence, jubilat, Best American Nonrequired Reading, Memoir, Cutthroat, Tupelo Quarterly and widely elsewhere. She is the winner of the 2014 Leslie Scalapino Award for Innovative Women Performance Writers for her verse play Non-Sequitur, with full production to be staged by NYC theater company The Relationship in late 2015. Visit her website: khadijahqueen.com.