2 poems by DarkMatter – The Feminist Wire

i am back in my hometown when i receive the news that Leelah, a 17 year old trans woman in ohio, committed suicide by walking in front of a truck.
the article refers to her by her birth name and gender
and i remember that “rest in peace”
is a luxury only afforded to bodies
whose violence ends with death.

you see,
in this town certain acts of transgression are permissible
when they are covered by health insurance or
have a bible quote to justify them
(is there a difference?)

this past year i have publically started identifying as trans.
my doctor does not know this. but my mother does.
though, if she could use denial as a pronoun for me she would.

earlier today my grandmother tells me that young boys like me
aren’t supposed to have so much pain in our bodies.
in other words, we are not supposed to be hurt
apparently we are only supposed to do the hurting.

we live in a small town in texas
which means that there are crosses hanging on every wall of the doctors office
and bible verses in fonts like comic sans and impact used un-ironically
and i think to my self how remarkable it is
that one symbol can mean such different things for two people
their clipart, my cliché
their birth certificate, our search warrant
our femininity, their ridicule
their cross, my classmate ashley

there are not many things the people
where i’m from tend to be right about
but i think she was about this one:
signed sincerely: me,
the flaming faggot from texas

it would seem that my doctor thinks of pain as an exception.

what a privilege it is to navigate the world like that
as if pain is something you can pinpoint and eliminate
not the only thing that reminds you that you have a body
to begin with.
…

this is the town where i attempt suicide at thirteen.
i did not have the language for it at the time,
it was a tightness in this chest,
a tinge in this voice
a belt around my neck

there was no language for why.
there was just this body
and His religion
and this bible belt around my neck

sometimes i miss that sense of conviction.

these days i have all the theory
to know why they would have called this a ‘suicide’ and not a ‘murder’
to rinse their own hands and crosses of the blood
as if we hate ourselves because it is our choice and not theirs
as if we kill ourselves because we wanted to and not because they told us to
as if we were not following their prophesy
on our knees,
in His name
amen

forgot to mention that he also prescribed my death

how it’s often not about the accident, the slur, the punch, the suicide
as of violence, as if trauma, as if gender
is an episode that starts and stops,
it doesn’t work like that.
and it never stops.
most of the time it is dull, quiet, and normal
it sinks into us so deeply that sometimes
we cannot tell the difference between our
depression and our oppression

between god’s word and our self hatred

because it hurts less
and sometimes

Sometimes I dream about breaking up with you;

other times I dream about you meeting my parents.

One is a dream, and the other is probably a nightmare,

and sometimes they switch places.

Last week you asked me if the gift I gave you meant goodbye.

At some point I lied.

then the word came to smooth it over.

babies come from the sky.

When the goodbyes and lies are over,

at the end of the world,

and play truth or truth

and tear each other open.

The truth is, I lose at crosswords all the time:

The truth is, when other people speak

of healing and happiness ask me

if I’ve tried yoga I tell them

I can only use a bandaid

if I understand why I am bleeding.

Does that make sense?

This is the way of things.

Sometimes, I panic when I look at sunsets,

like I loved the sky so much I tore it open

and then it bled.

This is the way of things.

This is how love works.

The pilgrims loved the land

so they stole it.

so we gentrified it.

Our parents loved us

and they messed us up.

I learned to love my body

and then I took a needle to it.

I hope one of us gets swallowed by a whale

and lives out our years digesting its loneliness,

and I hope the other dies quickly.

I hope the ending is very obvious and dramatic

I wish we were living in a bible verse.

Maybe this is capitalism and patriarchy speaking,

and maybe it’s me,

afraid that we will be obsolete before my Macbook.

Either way, I am asking

if you will tear up the sunset with me

so we can never say it fell apart

or that we were painfully ordinary

or that one day

you rode the express train a little farther

and never came back

or that one day

we lived in different cities

and I forgot to pick up the phone.

Let’s do it tonight:

while the sky feels raw,

and your hands still know how to lock into mine

The story of sex is one of failure and absence.

The night we made love.

The years we spend unmaking it.

I have this dream where I bleed to shreds,

and this nightmare where you sew me back together,

and sometimes we switch places.

Holding you in my arms

reminds me of dying.

Eventually we will tie up affection

and spray paint it absence,

whether for plague or depression or time and tiredness.

I will not die without you.

I am terrible at titles

and worse at endings.

However radical the love is,

There will just be no papers.

There will be no words at all, no meaning, no gravestone.

One day you’ll walk up to me

in a crowded room

and shake my hand.

It will be polite and clean.

You will say it was good to see me.

in another crowded room. 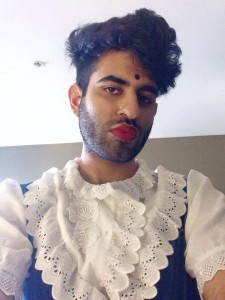 Alok Vaid-Menon is a transfeminine South Asian writer, performance artist, and community organizer based in New York City. Their creative and political work grapples with questions of power, trauma, diaspora, race, and desire. Alok is currently on tour with DarkMatter, a trans South Asian poetry collaboration. You can read more of their work at  www.returnthegayze.com 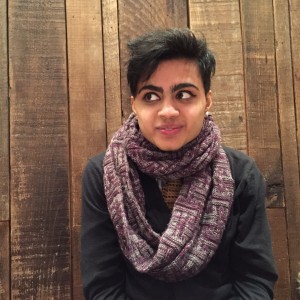 Janani Balasubramanian is a trans South Asian artivist-techie and one half of the poetry duo DarkMatter.  Their creative work deals broadly with themes of empire, desire, ancestry, microflora, apocalypse, and the Future.  Janani’s currently working on a novel, H, and a comic book, SHY.  You can read more at queerdarkenergy.com.