On the line of female Legos that will continue to be produced: “In a sad and metaphorical twist, the male [Lego figurines] can drive cars, run, and hold tools. The female minidolls can’t move their hands. They can only sit, stand, or bend over.”—Avivah Winnerberg-Cox

Be a gracious girl. Thank them

for the thumb, dumb dumb.

I was a single niche market

as a child. Do you want to see

my single niche? I can

bend over. A knee,

a stove, a bed. Maybe

I would be better

at driving if I could

Do you want to make

a bad driver with me?

I can bend over.

by sex, that is, chauffeurs,

you can tell by the hat.

Anyone can be made a woman

by taking away their job,

that is, hat, and replacing it

with a ponytail. A woman

with a mustache is something

to laugh at. I’m pretty funny

I can be a stand-up comedian

for Halloween, I just have to

Do you want to come

about periods, that is,

punctuation, I’ve been told not to

and I’m not one to question Mark.

remember, I can bend over.

Sometimes I even have

breasts. Your hands can hold

tools, will you lay my pipe?

And my drain is clogged

in my pink kitchen, and I want

to stand in front of the sink,

they were nice enough

to give me shoes.

It was intrigue enough—

a cord hanging from the ceiling

only grandfather was tall

enough to pull and reveal

the attic steps. Even

as my girl-cousins and I giggled

our way up the stairs, crouching,

a sugar cube each

melting in our mouths,

I wanted to know the strength

of bringing down a ceiling

with one hand. But the attic,

sloping, unfinished, belonged to us,

on our hands and knees, crawling

from beam to exposed beam

to lose ourselves in, we began

to place the props. We put the baby

in the pram, pushed him through

the kitchen and back again.

Left the mother in the box.

Passed out the plastic blocks

of twin beds and vanity,

distributed the child dolls around,

the ticking. My grandparents

have died, my cousins grown.

Each of them has their families

and homes. In a basement,

stick shut. On my desk

Above me, the ceiling and

its cracks run through.

to rip this house in two. 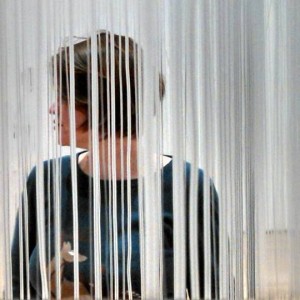 Shevaun Brannigan is a graduate of the Bennington Writing Seminars, as well as The Jimenez-Porter Writers’ House at The University of Maryland. She has had poems appear in such journals as Best New Poets 2012, Lumina, Rhino, Court Green, and Free State Review. Her favorite poetry gig is the workshop she leads at her local Domestic Violence Shelter.

The Feminine Anemone, definition of—

—A marine organism which attaches to rocks. A Wallflower with petal- or tentacle-like appendages laden with poison: Ornament as armament.

—In the juvenile phase, often encounters violence and predation, c.f., the ‘She Asked For It,’ Jailbait or Cocktease anemones.

—When damaged by passing boats, storms or divers, is said to suffer from Feminine Masochism, i.e., it is a Victim.

—Can self-beget: its hundred Kali arms can regenerate if cut off.

—May be found in the tide-bed she’s Stay-at-home to.

—May also be found in deep water. Is then referred to as Self-effacing, Depressed, or Passive-Aggressive.

—This coelenterate, though all-orifice, can be Frigid.

—Beguiling but deceitful, the feminine anemone has been called a “sea/Sweetheart, that Kleptomaniac.” (See “Lesbos” by Sylvia Plath. Italics added.)

—The Eve anemone attracts poisonous sea snakes and is responsible for much destruction of reef ecosystems.

—Persistent Co-dependent devotion to a given rock or clod shows a Submissiveness typical of the Persephone anemone (a style of Girl still in Vogue).

—As a juvenile, the Madonna anemone is ‘Like a virgin’ and revered.

—After sexual maturity, the Madonna anemone is referred to as Loose Woman, or simply, Whore.

—When it remains attached to one rocky bed, the feminine anemone is known as the Honest Woman, Fixèd Foot, or Ball-and-Chain.

—When the feminine anemone moves (however slowly) between attachment sites, it is called a Promiscuous Bitch.

—The feminine anemone’s flower-like appearance disguises the fact that it is a predator. Therefore, anemones are sometimes referred to as Black Widows, Ball-busters or Man-killers in the literature.

—When the anemone gesticulates with its tentacles, it is called Women’s Libber. However, the gesture may also signify a distressed organism (Cf., the Stevie Smith “not waving but drowning” anemone.)

—A high incidence of eating disorders may reflect the feast-or-famine conditions in which anemones exist. Anemones without adequate nutrition are anorexic or Karen Carpenters (slang).

—Where feminine anemones congregate, the habitat is called a Nunnery, the type of place the suicidal Ophelia anemone got off to.

—At the end of the life-cycle, the anemone is called Old Hag, Cow, or Shrew, i.e., she is no longer a Nice Piece of Ass and is of no further interest. 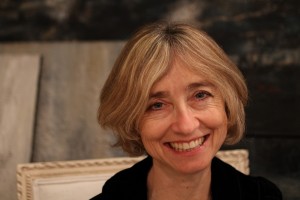 Coco Owen is a stay-at-home poet in Los Angeles. She has published poems in the Antioch Review, 1913,The Journal, Rio Grande Review, Cirque and CutBank, among other venues. She has an M.A. in comparative literature and Ph.D. in clinical psychology. Owen serves on the board of the independent, feminist publisher, Les Figues Press, in Los Angeles, and more of her work can be found at:www.cocoowenphd.com.

Brooklyn, Winter, 2009. (170 pounds): Jordan, Lebanese American, wears disdain for convention, courtship. On his nape, snaking up his face: A clear python swallowing a black teardrop. Inked in prison. He can only meet at night. On sticky Lower East Side bar stools. Under his stubble. His unwashed sheets. Bad boy fantasy. Boston Southie. All Adam’s apple, he coos: I beat off thinking about you yesterday. I even told my boys about your body. (Wow!) You‘re flattered. Flabbergasted. You even get Fridays. (But how? Well. It is always dark.)

Connecticut, Summer, 2010. (-32): Chris, White American, pulls out chairs, opens doors. Tall. Finally makes you feel like a woman, a girl. Especially when he bends down. Shouts at you. At home. Outside cafes. (Outside. With you!) He picks up the tab. Holds your hand. Admires how even your wrists are tiny. He talks of exes. Constantly. You meet one. Exotic (and pretty, she was pretty right? You hope pretty is his type): petite, Puerto Rican and Chinese. But she gained weight. His disapproval. His head shake. He finds you between leap years. He loves that you’re not the type to let yourself go.

Harlem, Fall, 2012. (+21): Michael, Black American, talks over you in African American studies. Fixes his stare after class. A drink, perhaps? Still, you’re the clueless voice of the middle class. He asks you for singles to tip the bathroom attendant. He’s teaching. He’s light-skinned. You call him mini-Barack. But he’s louder. Down-er. Explains his role in the struggle: Dating girls browner than he desires. Browner, even than you to suppress his white supremacist thoughts. (This is a compliment? Yes!) This is the compliment you take.

Cape Town, Winter, 2013. (Holding.): Rudy, Colored South African, reminds: You’re not mixed, like us. Coiled blonde dreadlock brushing his chubby arm. He’s right. Righteous. The ocean never obscured his view. He shows you dusty townships. Shaded cafes of the DNC rich. You run into his old classmate at the mall. Her name he can’t recall. He used to play with Black girls. Just not an African-American. (Perform Michelle. An opening. A way in!) His Colored girlfriend shows up at happy hour. Small, curly, curvy and caramel. Still, it’s hours before he introduces you. You appreciate everything the hyphen can erase.

Chicago, Summer, 2013. (Stuck): Romeo, White Italian, covers your escaping thoughts with toothy kisses. Broken-English babble of Cappuccino babies. He texts pictures of pink roses and his penis. But language is not the barrier. He’s short. You rebuff invitations to The Navy Pier. Going out. Playing house, one glass. You’re always halfway through the wine before the doorbell rings. Fermenting saliva. Salt. Rubber and worry: His expiring visa. His last chance. (Yours.) He strokes your skin, searches for fluency, just like Serena Williams.

I met my messenger in a third grade classroom. Her name was Jenifer, with one “n.” No beleaguering, repetition. No time. She had advanced leukemia. The childhood one. Whatever that means. And he held my hand as our parents whispered. The “C” word, her older brother. Chris. He flashed like Saturday morning cartoons. I didn’t know any teenage boys who weren’t my cousins. And he didn’t look like any of them. And my heart beat quick, bushy vibrations on his parents’ brown velvet couch. That day. Beside him. My tongue hung heavy and loose inside a mouth I kept trying to shut. And my wet and shifty palms collapsed as he slid three fingers into the heat of one.

Did he mean to do that? Did I look like a girl? There, on the couch. All of my friends were boys, and we never talked about it.

Not for the Reaper in the room, the one we all saw, but for the Fates that awakened then, in my sweat, dancing over.

I remember Jenifer’s big, grainy eyes, rapt under her thinning blond hair. On me. I wonder if she knew what started on that couch, in that orange living room. If she knew who I’d morph into when my palms got slick. Who I’d remain for all her lost seasons to come. Those eyes. The measured heat. As if telling me, on her way out, in her transfixed calm, that the setting sun is always warmer than its rising. Whispering to wait. In line, behind the blithe lilies. It’d be a while before I could hold a hand and look up. I was going to be the last flower to bloom.

“I have some black family

His girlfriend has straight

slips that she’s better than Africans.

She corroborates his space.

I no longer know mine

in the cradle of civilization.

Here I thought we were all Cosby kids.

I stay. Come home to:

barrel full of spite and promises

of the golden fleece;

they have black family members too. 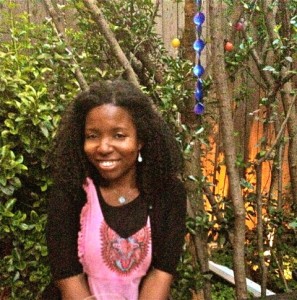 Kimberly Reyes is a second-generation NYer living in California and has written for the Associated Press, Entertainment Weekly, Time.com, The New York Post, The Village Voice, Alternative Press, ESPN the Magazine, Jane, Honey, NY1 News andThe Best American Poetry blog. She received an M.A. from Columbia University’s Graduate School of Journalism in 2013. After that she was a post-graduate journalism fellow at the Poetry Foundation, a Callaloo fellow and is currently a William Dickey Fellow at San Francisco State University where she’s an M.F.A. candidate in poetry.