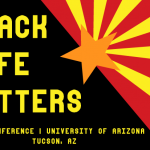 A Facebook conversation about Renisha McBride, Jordan Davis, and the white space of white silence led to a brainstorm one morning in early 2014, which led to a lengthy email conversation among editors at The Feminist Wire, which led to our collective intention to host a conference at the University of Arizona.

Scholars, writers, artists, activists, policymakers, and community members will come together in Tucson, Arizona, in January 2015 to discuss WHY Black life matters and WHAT can be done about sustained racialized state violence. We will livestream sessions for folks who cannot travel to Tucson.

The conference will include lectures, hands-on working sessions, arts and performances, and social justice actions, as well as significant time for conversation. The end of the conference will lead into planned MLK activities in Tucson, and hopefully visitors will stay for these, as well.

Planned outcomes of the conference include a series of thematic policy papers as well as local, regional, and national action items and a ‘to do’ list of next steps. We envision this conference as part of an ongoing conversation about Black lives, and not as a beginning, an end, or the ‘last word.’ It is our hope and intention that participants bring with them the vital work they are already doing, and carry away tools and resources to continue to do that work in their own communities.

The BLM Planning Committee thanks our many co-sponsors and supporters, as well as the wonderful staff of the UA Department of Gender and Women’s Studies: Lupita Loftus, Terry Mullin, Leigh Spencer, and Darcy Román-Felix. We are also grateful for UA librarians Nicole Pagowsky and Niamh Wallace for their creation of Ferguson Resources and inclusion of information about the conference.