And The Beat Goes On: Toni Cade Bambara – The Feminist Wire

Home / Activism / And The Beat Goes On: Toni Cade Bambara

And The Beat Goes On: Toni Cade Bambara

Editors’ Note: Since this is a special forum celebrating the life, work, and legacy of Toni Cade Bambara, one of our ancestor heroines, TFW made the editorial decision to republish Dr. Gloria I. Joseph’s “And the Beat Goes On: Toni Cade Bambara,” as Joseph was a peer and dear sister-friend of the celebrant. This piece was originally published during a one-day mini-forum on March 25, 2014, which would have been Toni Cade Bambara’s 75th birthday.

…outrageously brilliant… She had this keen, keen intellect, absolutely on target… intuition—and humor…

Morrison’s statement about our very dear sister friend is positively, absolutely correct and I wish to expound on it.

Toni Cade Bambara’s talents and intellect were indeed, outstanding. Her range of knowledge was extensive as was repeatedly demonstrated during conversations and through her writings. The fact that this “knowledgeable information” flowed so easily from Toni and the manner in which she seemingly automatically, reached conclusions and swiftly got to the bottom line of discussions/ conversations, is demonstrative of genius quality. “She was a diamond of the finest cut with many facets.” (I borrowed these lines from Webster because they are precisely fitting.) Toni had the innate ability upon hearing a word, phrase, story–to digest it,  process it, diagram it within a worldly context, filter it through universal lens–place it within the current situation, environment, condition–and then offer a reply. And this could take place in a squinet, which is less than a minute. (Don’t bother to look up “squinet;” it’s a childhood made-up word.) 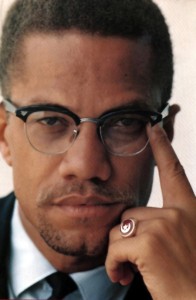 I will offer a story from personal experience that demonstrates Toni’s effortless perspicacious responses. I sent Toni a section of a book I was writing, On Time and In Step: Re-Union on The Glory Road, that featured Malcolm X and Sojourner Truth. Late revolutionary characters residing in the firmament were able to look down at the earth folks and make comments. I asked Toni for feedback and received five pages, typed on both sides, of extremely constructive responses. Her over all advise to me in writing the novel was, to show, don’t tell, and ground your characters.

If Malcolm  were to (in present tense now) look down/over/through to our world and peep on the continent-wide anti-apartheid  conference that [Thomas] Sankara hosted in Burkina Faso  a couple weeks “for the CIA bumped him off, I would then believe anything he remarked about it in relationship to the OAU.” By grounded in character–I mean—what’s going on down here that Malcolm has a link to. Then whatever else he said I might go for.

Now just look at how potent those few sentences are.  There is historical and political and geographical knowledge. There is up to date information regarding world affairs and selected words that describes motive. (C.I.A. bumped Sankara). Additionally, there is the very critical instructions Toni offered to me in my writing. She was gracious and altruistic in her responses and humbly thanked ME for sharing my work with her. She truly, truly enjoyed the concept and style of my book and invited me to visit her so we could have face to face discussions.

What I find most positive about this piece is that in contains fundamentals that Toni stood for and would appreciate. There is that cycle of connectiveness. I start with words from Toni Morrison. I expound on it by using Toni’s comments. In so doing I offer messages to other writers. And Toni Cade Bambara is the kernel of it all. Her values are passed on through an analysis of her brilliance and the utilization of her naturally spewed advice. This is legacy and as long as folks continue to use Toni’s word and style, Toni Cade Bambara remains with us. 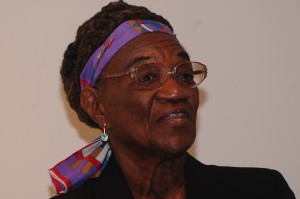 Dr. Gloria Joseph was raised in New York City by her West Indian parents. She earned her B.S. in Health, Physical Education & Recreation with a minor in Science & Educational Counseling at New York University. She earned her M.S. in Psychological Services at City College of New York. and became a Licensed Guidance Counselor & School Psychologist. This was followed by her earning her Ph.D. in Educational Psychology from Cornell University. When she retired in the early 80s  from being a Professor in the School of Social Sciences at Hampshire College, Dr. Joseph had 30+ years of professional experience and research in teaching and educational administration in private and public institutions in the US and abroad. She taught in Alternative, Vocational & Scholarly Educational Environments from elementary through university levels of instruction, counseling, community development and organizational management. She co-edited anthologies, including Common Difference: Conflicts In Black & White Feminist Perspectives and Hell Under God’s Orders. She is the author of the book On Time and In Step: Reunion on the Glory Road. She founded and co-founded several organizations including the Che Lumumba School for Truth, Women’s Coalition of St. Croix, U.S. Virgin Islands, Sisterhood in Support of Sisters in South Africa, and Doc Loc Apiary (Local Honey Production and Educational Outreach), to name a very few. She has lived and traveled extensively throughout the world in India, China, several countries in Europe, Africa, and the Caribbean. Dr. Joseph was one of the two featured “Feminists We Love” during The Feminist Wire’s global forum celebrating Audre Lorde.