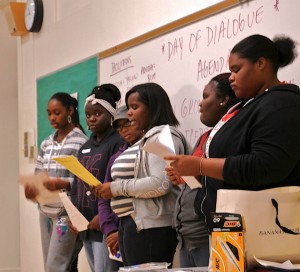 “I don’t want to be considered African American,” one of my tenth grade Women’s Leadership Project students said, shaking her intelligent head distastefully.  Another girl agreed, stating that her relatives were from Louisiana, so what did that have to do with Africa?  We’d been watching the 2008 film “The Souls of Black Girls.”  Our discussion of slavery and the ritual rape of black women elicited painful questions about their heritage.  Like Raven Symone, who notoriously proclaimed recently that she wasn’t African American, identifying with Africa or Africans was outlandish to some of them. Their disavowal is understandable in a geopolitical climate in which Africa is still associated with primitivism and blackness is demonized and discounted 24/7.  According to a recent report by the UCLA Bunche Center, people of color account for only 7.8% of writers in Hollywood film and only 10.5% of lead actors.  In the age of Obama, the image industry has become more unabashedly segregated and take-no-prisoners white supremacist.  Yet on a more basic level the disfiguring images and messages that young black girls consume are ones that we as black women—feminist, womanist or somewhere in between—have not been vigilant enough in challenging on the ground.

When white women and other non-black folks demean or marginalize relatively powerful black actresses (Kerry Washington, Viola Davis, Jill Scott) or, God forbid, the almighty “Bey”, we’re all over it, tweeting up a storm about the evils of respectability politics.  That’s cool and undoubtedly necessary for sticking it to racist white female power brokers.  However, I’d like to see the same energy directed at addressing the sexist anti-black miseducation that occurs every day in our schools.  Truth is, when it comes down to actively mentoring, teaching and apprenticing black girls in public schools many of us are MIA.  When it comes to creating or lifting up existing feminist or womanist programming for black girls in our communities the lavish support and enthusiasm that fuel the latest feminist Twitter skirmish is simply not there.  The sexism, misogyny and heterosexism of traditional black civil rights, civic and religious organizations is exacerbated by the dearth of culturally responsive anti-sexist education for black girls.  It’s no revelation then that young black girls see feminism as not just white but as irrelevant.  And it’s no surprise—as the feminist activists who’ve pushed back against President Obama’s My Brother’s Keeper initiative have argued—that many black girls don’t “see” sexist oppression as central to their daily lives.

Earlier this year, I was asked by a black female administrator at a South Los Angeles high school to do a leadership pilot for 9th grade black girls.  A month after it began the initiative was derailed by the very same administrator because she was more concerned about civility and protecting the campus’ reputation than with addressing the authentic concerns of black female students.  On this particular campus sexual harassment was rampant and black girls were at high risk of falling victim to sex trafficking.  Colorism and fierce competition for boys were destroying relationships between black girls and damaging their self-esteem.  Most of them felt constant pressure to take care of siblings, parents and other relatives.  Few could identify black women role models other than Beyonce, Oprah or, sadly, Nicki Minaj (a favorite because she’s “making bank”).  All of them agreed that violence was taking a serious toll on black girls.  Many spoke of peers performing oral sex “on demand” or posting scantily clad pictures of themselves for a shot at Instagram or Facebook “fame”.  Most identified lack of access to reproductive health care, birth control and HIV and STI prevention resources as a major barrier to their upward mobility and independence.  During the process I was fortunate to have the support of another black woman administrator, Angela Rodriguez, who headed the school’s Wellness Center. 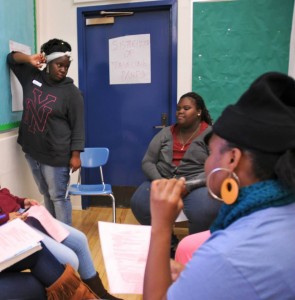 Many African American women agree on the urgent need to provide mentoring, leadership, and community development programs for black girls.  Unfortunately there are limited resources and limited will to do so.  In many schools, high stakes tests, criminalizing discipline policies and sheer faculty burnout preclude sustained attention to and support of culturally responsive programs for black girls and girls of color.  Fearing black children, some of us have even internalized the view that black girls are too loud, disrespectful and unruly to work with; doling out dean’s office referrals for back talk and “attitude”.  In schools with high numbers of black faculty and skyrocketing rates of suspension and expulsion the Cosby bootstraps-and-sagging pants mentality is all too real.

Case in point, a black female teacher recently gave me a self-help book for my students.  It was written by a black woman who instructed black girls on how to be “queens” and virtuous women.  One of the author’s prescriptions for developing dignity and self-respect was respecting “God the Father” and “one’s husband”.  Often such uncritically heterosexist patriarchal guidelines are viewed as the best “remedies” for young black girls who act out hypersexual imagery and dehumanizing social constructs.  According to this cliché, if black girls just trusted in “God”, developed a personal relationship with “Him” and learned how to become strong, capable caregivers, many of their personal problems would evaporate.  This brand of reactionary religiosity is all too common in youth leadership development curricula which render queer girls invisible and seek to domesticate straight girls.  Instead of teaching youth to question destructive gender stereotypes and homophobic myths, some of these programs merely affirm them.

When women of color mentors do not provide clear countervailing messages about being strong, assertive and unyielding about safe sex, open communication and self-protection in teen heterosexual relationships, girls of color are even more at risk. And if our children are misguided about their identities, discount their African heritage and don’t have a language for naming sexist oppression in their lives we must take responsibility.  As writer-activist Thandisizwe Chimurenga said, “Many young black women/women of color come into contact with feminism through college, which is a marker of privilege and class mobility.  Many young, low-income black women (grassroots) and others who disdain feminism are not represented in these centers of higher learning, in addition to the fact that they have a reference for feminism that comes from popular culture which has no interest whatsoever in empowering young women of color.”  Black girls’ lives and, yes, black feminism on the ground, do matter.

Sikivu Hutchinson is founder of the Women’s Leadership Project and author of Godless Americana: Race and Religious Rebels and Moral Combat: Black Atheists, Gender Politics, and the Values Wars. Her novel White Nights, Black Paradise on the Jonestown massacre and Peoples Temple is due in 2015.

Related Items
← Previous Story Facebook and Apple Want Your Unborn! Or, Why Corporations Should Keep Their Hands Off Employees’ Ovaries
Next Story → TFW at the Upcoming National Women’s Studies Association Annual Conference