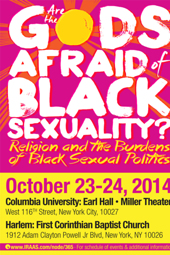 Seventy-three days ago, Mike Brown, Jr., an 18-year old black teen, was shot several times by Darren Wilson, a white police officer. The killing of Mike Brown has positioned Ferguson, Missouri, in the public imagination as a contemporary Selma—a site of civil unrest and provocation in response to anti-black, state-perpetrated and sanctioned violence, a site where a mostly black populace will not allow the murder of one of their young to be forgotten and dismissed. Mike Brown’s death was in no way disconnected from the other forms of blue on black crime and other types of vigilante style murders that have ended the lives of black people in St. Louis and elsewhere. Mike’s death is not disconnected from the murder of 19-year old Renisha McBride (shot in her face and killed after seeking help at the home of Theodore Wafer, the perpetrator, in a suburb of Detroit), 22-year old Jonathan Crawford (shot dead by police in an Ohio Wal-Mart while holding a toy gun), Aiyanna Jones, Trayvon Martin, Rekia Boyd, Eric Garner, Miriam Carey, Ezell Ford, and so many other black cisgender and transgender women, girls, boys, and men.

These murders signify the valuelessness of black life in the United States. And in St. Louis in particular, a city replete with examples of the various ways white racial supremacy has been reified by way of municipal laws and evidenced in the tense relationships between police and the black folk who reside there, black life ain’t worth shit. So much so that the black public was made to experience a “neo-lynching”: a moment when a lifeless body killed for being suspicious, shot for being non-docile, deadened because of an attempt to actually live, was left on display in a densely populated but small black neighborhood—in the street—for four hours. Friends, family, neighbors who were strangers, passersby in the Canfield section of Ferguson were made to peer upon Mike’s blood-drenched black body—for four hours.

This killing-turned-public spectacle was a pedagogical moment meant to teach black folk about the ways in which we are to behave, to remind us of the consequences that await us if we deny the state its power, to instruct us so that we understand that black life is so insignificant that the broader public (some of whom are black) won’t lose any sleep if our bodies are left to lay prostate in a U.S. street, dead. In fact, they will keep living and attempt to feed their presumptions as the real truth: here was a black weed-smoking thug who had it coming to him. And should we get the nerve to speak back to power, to ask for truth instead of lies, the black will be met with tanks in the street, shot with rubber bullets in our chests, burned with tear gas eating away at our eyes, have our bodies caged in jail cells subsidized by the same federal dollars used to support the attorney general’s office who we pray will ensure a just process of oversight.

But our prayers seem to almost always go unanswered.

To be black in an anti-black society is to be a commodity fit for liquidation, it is to be already evidenced as not befitting of life, it is to live under surveillance and always positioned as a potential threat, it is living under the conditions of carcerality—of various forms of imprisonment (of our senses of self, of our expressions, of our bodies, of our gender articulations, of our sexualities). How then do we free ourselves of the lure of anti-black self-think? How might we think differently about ourselves contrary to the ways we are otherwise instructed by the state, by the corporate sector, by the church? How do we become abolitionists of both the prison industry capitalizing on black bodies and the metaphorical prison cells restricting the expansive nature of our sexed selves? How might we begin to locate police brutality next to capitalist exploitation of black laborers next to poverty next to housing discrimination next to educational inequity, rape culture, queer and trans antagonism, ableism, citizen-centrism, death dealing theologies, and much else aimed at harming black folk within the same matrix of anti-black oppressions? In other words, how can we create a black-body-loving, pleasurable, non-harmful, expansive view of sexualities in a society that does not love the black body? How do we think through and express black sexualities that are not an artifact of years of anti-black conditioning? To free our selves, our bodies, and our desires, we must rethink and expand our racial justice framework.

It is easy for us some of us to place Ferguson at the center of racial justice work at present. Emotions are high, and rightly so. Righteous indignation is what many of us feel. And yet, it is so easy to forget that racial justice, the type that insists upon the securing of justice for ALL black lives (not just cisgender heterosexual men), can only be achieved through an expanded vision of liberation and a move from a type of just-us that is patriarchal, heteronormative, and restrictive. Unless all black lives matter to us, anti-blackness (and its contingent features) will continue to deaden us. Our inability to expand our racial justice frameworks in such a way that it is purposefully and radically intersectional, self-reflexive, and expansive results in us reinforcing the anti-black logic—that some of the black deserve invisibility, policing, and death. This is why it is possible for Rev. Jamal Bryant, the notorious pastor of Empowerment Temple AME Church in Baltimore, MD, to show up at a large gathering at Chaifetz Arena at St. Louis University during the weekend of resistance of #FergusonOctober and speak from the stage about justice as if his sermonic rant on black liberation for the black folk in St. Louis was not at all complicated by the many misogynist, sexist, and homo antagonistic sermons preached from his own pulpit. One must ask if the “unloyal hoes” Bryant recently preached about at his church factor as those blacks who deserve justice, too.

What I am trying to do is draw our attention to the myriad ways anti-blackness works to pervade our imaginations, politics, and our theologies of sexuality. And by anti-blackness, I mean any apparatus or ideology that renders any black life futile and appropriate for annihilation. If we are to talk about religion, media, markets, and the making of black sexualities, we must therefore contend with the force of anti-blackness in a society, a marketplace, where whiteness is commodified and blackness deemed useless. Any tool of the market, then, be it media and in some cases religion, will be used to construct an image of black people, help proliferate ideas about black sexualities, shape our gender expressions as black people in ways that will always benefit the market and never us, never all of us, never women, never queers, never trans brothers and sister, never the undocumented, the disabled. In a market organized around the imagined normative “family”—always patriarchal, always economically a step above those who are imagined as drying up the state’s resources, always married, always white, black folk remain among the queer assemblage in the public imagination, always non-normative, which is why it makes sense that some of us fight so hard to disprove the image of the contemptible black person lodged in the public imagination. We fight to be seen as normal, acceptable, and worthy. And too often, religiosity is positioned as the bully pulpit upon which claims about right and natural sexualities are laid. This is why it is important for us to question how black sexualities are conceptualized, theologized, and actualized in this moment—this moment of Ferguson resistance. The sooner we realize, however, that America was Ferguson before Ferguson ever was, the sooner we might realize the force of anti-blackness has always been at work shaping our ways of being (and non-being) in the world, our self-representations, and our conceptions of sexualities.

Here, now, we find ourselves existing in a time of dissent. No more will our bodies be left in the street. No more will we allow sagging pants, loud music, seemingly suspicious looking items in our children’s hands, being at the wrong place at the wrong time, police quotas, our blackness to be a cause for our deaths by the police or others. No more. We are beginning to name the state as a culprit and imagining justice as that which can be achieved without state intervention. Here, now, we find ourselves in a moment where counter-hegemonic politics are necessary. Indeed, as scholar activist Frank Wilderson contends, “Blackness is a positionality of ‘absolute dereliction’ (Fanon), abandonment, in the face of civil society, and therefore cannot establish itself, or be established, through hegemonic interventions.” Therefore, the politics and practice of black liberation that seek to upset the hegemonic order (of white racial supremacy, of capitalism, of patriarchy, of hetreonormativity) must resist reinforcing that which it seeks to dismantle. In fact, a radical politics and practice of black liberation, in this moment, won’t be marketable under those normal conditions—offering plates will come up short when we preach counter hegemonic messages, to be sure. 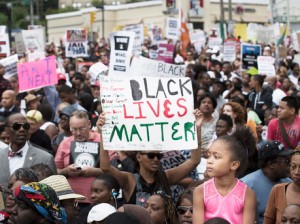 The question now before us is a simple one: will religion be used as a tool of the market to further perpetuate the types of violent black-hating, black-body-despising theologies that render black folk, queer folk, trans folk, women, the disabled as insignificant black lives or can it be used as a spirit force illuminating the truth that all black lives matter? If religion’s practitioners do not choose the latter, it too can be counted as an apparatus of the anti-black project imprisoning and deadening our people. In response to anti-blackness, we proclaim that black lives matter. It is a political proclamation, but it is also an intervention in the face of policies, ideologies, and systems that would deem otherwise. The sooner the better that we realize some of the black are still assailed by deadly queer, trans, bi antagonistic theologies; that cisgender and trans women are still harmed by the hands of white racial supremacy, patriarchy, sexism and rape; that so many of the black are trapped within restrictive gender boxes that function as ideological prison cells; that black bodies are not valued and some less so than others.